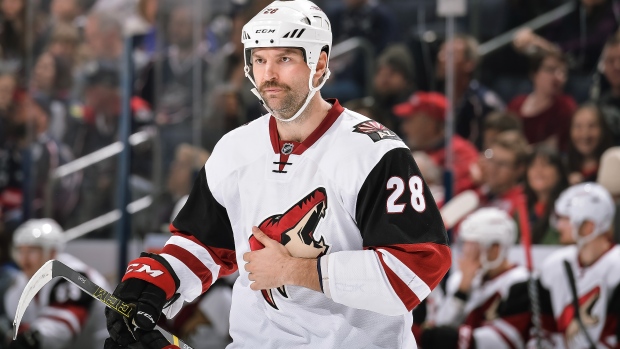 Could the first 3-on-3 shift of John Scott’s 280-game career actually come during the NHL’s newly formatted All-Star Game?

It’s possible, if fans have anything to do with it.

Thanks to a surprising push by fans on social media, Scott is the No. 1 vote getter through the first day of the league’s fan balloting, which will determine four captains for the 3-on-3 mini tournament in Nashville on Jan. 31.

Scott, 33, has only dressed in six of the Coyotes’ 24 games this year - and has more votes than Alex Ovechkin, Patrick Kane or P.K. Subban.

So far this season, 651 non-goalies have appeared in at least five overtime games. Scott is one of 211 players - or one-third of the league - who haven’t skated a single shift in 3-on-3, according to Elias Sports Bureau. He averages six minutes and 20 seconds per game total.

After Wednesday’s practice in Detroit, Scott may have been a little embarrassed about the entire social media phenomenon - which seemingly started out of nowhere.

“I don’t know what’s going on,” Scott told the Arizona Republic. “I just kind of stay out of it. Everyone gives me updates. The guys are giving me a hard time about it, but it’s kind of neat. The fans, they obviously like me for some reason. I think it’s more of a joke than anything, but I’ll take it.”

Despite the push from fans, the belief is Scott would politely decline an invitation from the league if he is ultimately selected. He’s known more for his fists - with 535 penalty minutes - than soft hands, which fans in Nashville will pay to see. Scott has five goals in his NHL career.

Scott is not the only social media darling to receive an unexpected push from fans. In 2007, a similar campaign for Vancouver Canucks defenceman Rory Fitzpatrick fell 23,000 votes short of Nicklas Lidstrom. Fitzpatrick didn’t have a point in his first 18 games that season. Last year, Latvian fans voted in native son Zemgus Girgensons.

The NHL’s Hockey Operations department will name the remaining 40 all-stars in January. With only six forwards from each division, Scott’s inclusion would likely mean a deserving teammate, like Max Domi, would be bumped from the game. That isn’t lost on Scott. TSN predicted the All-Star representatives for all 30 teams last month.

Scott has handled the story like a pro – and with humour.

With tongue firmly planted in cheek, Scott added Wednesday: “You never know. There’s still some time left. I could turn it on.”