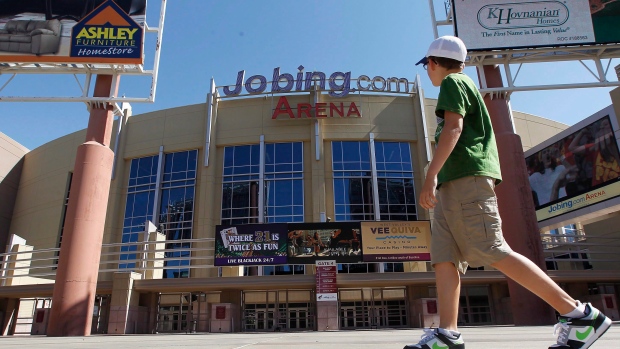 The Arizona Coyotes were granted a temporary restraining order that prevents the city of Glendale for the time being from ending its arena management contract with the NHL team.

In a hearing held Friday afternoon in Arizona Supreme Court, team officials argued that “harm to the team is worsening every day.”

Glendale’s lawyer said the city was willing to accept the temporary restraining order, which legal experts described as routine.

“You march in and get it almost immediately then the court says we’ll have an interim hearing within a fairly short timeframe at which time we’ll have more opportunity to look at the background,” said Bob Bartels, a professor of law at Arizona State University. “They take some evidence, file briefs and you don’t do a lot of discovery, but even at the hearing for a preliminary injunction, nothing is a final decision.”

The Coyotes and Glendale are expected back in court on June 29 for the preliminary injunction hearing.

“Even the decision (at the June 29 meeting) won’t be permanent,” Bartels said. “They give you more of an opportunity to make discovery requests, get information from each other and then we get to the final injunction stage, which is a trial.”

The Coyotes were ordered to put up a $250,000 bond, money that the court will control and can be used to pay the city if it wins a judgment against the hockey team.

The city last made a payment of $3.75 million to the Coyotes on April 1. The next quarterly payment is due July 1 and it’s unclear after the temporary restraining order if the city will be ordered to make that payment.

Glendale Vice Mayor Ian Hugh said he’s not worried about the litigation and said the city expected the judge to grant the temporary restraining order.

“Our lawyer hasn’t called me and, if it was a big deal, I expect I would have heard from him,” Hugh said in an interview. “We are not going to lose."

Coyotes spokesman Rich Nairn wrote in an email before the temporary restraining order was granted, “That's fantastic. The same person who started a process thinks he will prevail. News at 11."

On Wednesday, before the city council vote was held, public consulting firm MBQF canvassed Glendale voters about their opinion of the controversy. Of the 443 Glendale residents who responded, 58 per cent said they would try to “find a way out” of the agreement, the local ABC television affiliate reported.

Even if the team wins its lawsuit against Glendale, it might be tough to collect.

If the Coyotes win a legal judgment, that would leave the Coyotes, who filed for bankruptcy themselves under different ownership in 2009 to cancel their debts with creditors, facing the prospect of trying to collect a massive cash award from a cash-strapped city that already struggles to pay its bills.

In its financial report for the year ended June 30, 2014, Glendale staff said the city is already operating on a shoestring.

“The city has been reducing expenditures through mandatory furloughs, leaving vacant positions open and reducing non-personnel expenses,” the report said. “Since fiscal year 2009, the number of full-time equivalent employees citywide has decreased by 368 positions, a decrease of 18.8% of the workforce. The city has also reduced department budgets, merged departments to cut additional costs and streamlined operations.”

Median household income in Glendale is $41,037 (U.S.), The Glendale Star reported in November. The median income in the city has fallen nearly $4,000 since 2000. Every other major city in the county increased its median earnings over that period, the paper reported.

Even though the NHL says that it is committed to the Coyotes playing in Glendale, some current and former NHL team officials say they are surely working quietly to make alternate plans.

When the Atlanta Thrashers moved to Winnipeg in 2011, for instance, the NHL said publicly it was committed to the Atlanta market until the last possible moment before the team’s sale and relocation were announced.

“So people just make this stuff up, right?” Bettman said in May 2011, days before the team moved to Winnipeg. “Where’s the accountability from all the people who a month ago were saying that Phoenix was definitely going? Whatever is being written (about Atlanta) is being made up.”

“There’s no question that the NHL did a superior job getting the Atlanta ownership resolved without media attention," former Ottawa Senators chief executive Roy Mlakar said. "That is part of Gary and (deputy commissioner Bill) Daly’s M.O. They don’t feel they have to discuss business philosophies and planning with the media. They don’t like to share their strategies.”

Mlakar said it’s unclear how fast the Coyotes could relocate if that’s the route the NHL settles on.

“This doesn’t take days,” he said. “They need a 75 per cent approval of the owners, and they don’t want to get Boots Del Biaggio’d. They don’t need another 30 for 30 with John Spano.”

Spano once tricked the NHL into believing he was a wealthy businessman with enough cash to buy one of the league’s teams. Del Biaggio was sentenced in 2009 to eight years in prison for stealing from investors and banks in a bid to buy an NHL team.

The departure of former city attorney Craig Tindall from his position more than two years ago played a central role in the city’s decision to terminate the arena deal.

Tindall was asked to resign as city attorney in February 2013 and he left his position on April 1, 2013, but accepted six months of severance, meaning he was on the city payroll through October 1, 2013.

In court documents filed on Friday, the Coyotes wrote that Tindall “did not initiate, negotiate, secure, draft or create the agreement” and that city councillors “abused their discretion” by waiting nearly two years to cancel the contract.