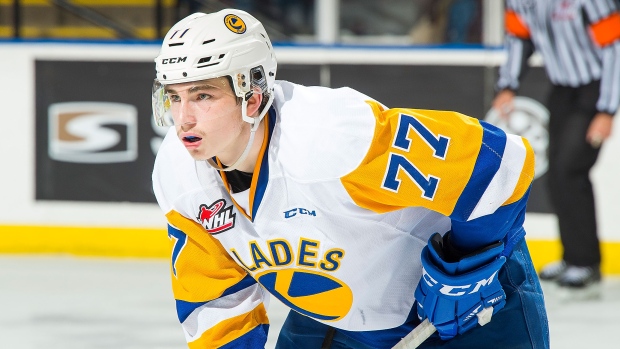 Kirby Dach grew up idolizing Jonathan Toews so you can't blame the 18-year-old for being a bit nervous when he met the Blackhawks captain for the first time.

"It was weird," Dach recalled. "We were at development camp and just kind of crossed paths. I was a little bit tongue-tied and didn't know what to say to him at first, but he's an awesome person. To be able to learn from him at the start of my career is going to be awesome."

Dach, like Toews a third overall pick by Chicago, was mesmerized by the centre's rise up the ranks.

"Obviously, the World Junior shootouts kind of come to mind," Dach said when asked for his favourite Toews moments. "And then that one move he had, it was his first year against Colorado, he came down the wall and split the D and kind of just told the league that he was here and that him and Kaner were going to take over."

Based on how Dach looks this week, he may be about to announce his arrival to the professional hockey world. The Saskatoon forward scored twice and added a nice assist in Canada's win against the United States on Tuesday.

"It's never easy for bigger guys to move that well," said linemate Joe Veleno, "and I think he has that rare skill. And even his skill level, the way he sees the game, stripping the puck and keeping the puck in tight areas, it’s really surprising."

"Myself and my brother have always kind of been bigger and lankier guys," said Dach, who stands six-foot-four. "So we knew to be able to play at the next level right away we have to be good skaters and strong on our skates so we always worked one-on-one with our skating coaches growing up and it’s helped us out tremendously."

"Once that big body gets going he's pretty lethal," said Team Canada assistant coach Mitch Love, the head coach in Saskatoon. "He uses his body to protect pucks well. One real underrated thing in his game is his stick, his ability to strip guys of pucks and defend with his stick, he does a really good job of that and that will make him a really good, complete, 200-foot centre."

Love describes Dach as being an 18-year-old who already acts like a 25-year-old professional.

"His elevation in the playoffs last year as a young man who hadn't played playoff hockey since he was a youth player, it was pretty special," Love said. "He was very competitive. Typically that time of year you need your best players to be your best players and he was clearly that and that was something really special to watch."

Whether it's at the World Juniors or in the NHL, it seems likely Dach is prepared to meet the moment. Toews, for his part, seems to think Dach will be joining him in Chicago sooner than later.

"Obviously there's some true talent there," Toews said during a convention for Blackhawks fans last month. "Everyone that watched him in the WHL playoffs this year said he was dominant, playing through teams matching up against him. I think he's one of those guys that probably could step in this year and definitely cause a stir in training camp. I'm excited to see what he can do. I'm not trying to add any pressure on him, but I get the feeling he's got that mindset that he's going to come in and not move over, not get out of the way for anybody, and he's going to want to make our team right off the hop."

"As an athlete you're always kind of striving to be at that next level," he said. "So, I'm going to do everything in my power to make that decision tough on Stan (Bowman) and Jeremy (Colliton) in Chicago. It’s my job to push for a spot there and obviously not going to back down and let anyone take that away from me."

Defenceman Philip Broberg had the opportunity play in the OHL this season, but opted to stay home in Sweden.

"I played against men last year as well, but this year I hope to get a bigger role in Skelleftea in the SHL and hopefully play big minutes and come back for training camp next year and make the team," the Oilers first round pick said.

"It will be good," said Sweden coach Tomas Monten. "It's going to be tough, I mean, he played in AIK last year in the second division and Skelleftea is a big club, they're a contender, they want to be a top-four team so I think he'll have to modify his game a little bit more. I think he will be asked to play a little more defensive role and shutdown players and that could help him, because getting to the NHL, if you’re not Erik Karlsson, you got to play both ways. You got to be able to defend. It'll be good for him for one more year at home and developing and then Edmonton has something to look forward to."

Broberg, who scored a power-play goal in Friday's loss to Canada, is also set to play a prominent role for Sweden at the World Juniors.

"He's a phenomenal skater," Monten observed. "He's quick, he can join the rush, but he still can get back. He skates with the puck, can carry the puck really good. Passing and shooting are something he can work on, but playing with the puck and without the puck his skating will make him a really good player."

"I'm working a lot on my shot,” Broberg said, “to become a better shooter to score more goals in different areas in the game."

The Rockets are hosting the Memorial Cup this season, but Finnish defenceman Lassi Thomson couldn't resist the chance to play for his hometown team (Ilves) in the Liiga.

"I think that's better for me, to play with men next year and getting ready to play in the NHL," the Senators first round pick said. "So, I’ll be ready to play earlier in the NHL if I play with men. All my friends can watch me play, and to be close to my family is pretty nice."

Thomson produced 41 points in 63 games with Kelowna last season saying the biggest thing he learned was how to handle the smaller ice surface in North America.

"At the end of the day, he's a great player and I don't think it matters," said former NHLer Tuomo Ruutu, an assistant coach with Finland. "He works hard, got to keep his character and that's all that matters. It doesn't matter if you play here or back at home."

Making the World Junior team is a big priority for Thomson as he was among the final cuts for Finland a year ago. Was it hard to watch the team win gold in Vancouver?

"Yeah, a little bit," he admitted. "It's hard, because they win so that's a little bit hard because they cut me off … I want to show coaches I can play those games. I worked hard every day after that."

"He's going to have a big chance to make the team," said Ruutu. "He’s one of the top (junior) players in the world, a good shot and can skate. He's a great player, he works hard. He's going to develop."

Akil Thomas knew he needed a good performance and the Kings prospect delivered.

"It was my third game so I knew I had to give it a little extra," Thomas said after Canada's win over Sweden on Friday afternoon. "I thought my line played pretty well, we retrieved pucks and got scoring chances so pretty happy."

The Niagara forward, who produced 102 points in the OHL last season, started Canada's first game on the top line with Alexis Lafrenière and Veleno before being replaced by Dach early in the first period. Thomas was whistled for a pair of penalties in the game while failing to produce any offence. He had a secondary assist on Wednesday, but also took a penalty in a blowout loss to the Finns.

"Definitely the first game was weird getting right into a game situation with it being summer and not playing games," he said.  "But by the third game I felt pretty good and felt pretty comfortable."

On Friday, Thomas was flying. He scored on his first shift of the night, drew two penalties and was a shot-blocking force on the penalty kill.

"Everyone kind of knows they’re playing for a spot for the team in December so I gave it my all," Thomas said. "For me, I’m playing like it’s the Stanley Cup playoffs, that’s what I want to show them."

"He was good," said Team Canada coach Dale Hunter. "He was solid. And coaches look for both ends of the ice. He contributed offensively and also defensively, he made some big blocks and played well defensively in his own end. He's got the skill and the will. When you put them two together you have a good player. And sacrifice, the game is blocking shots and the puck hurts and he's willing to do it."

Thomas was stung by an Alexander Holtz blast to the mid-section during a two-man advantage for Sweden.

"It hurt," Thomas said with a smile, "especially when you’re standing in the middle of the ice and you’re standing up and can’t really see the puck and then you feel it right in your leg. It hurts even more when you can’t see it coming."

But his ability to put himself in the line of fire may ultimately be what wins him a roster spot with Canada.

"I can bring heart to the team," he said. "I'm versatile so I can take face-offs, I can play centre, I can play wing, I can be a power forward, I can be a playmaker. I want to be a guy that the team can depend on in situations like that, to score a big goal and to play wherever the coach needs. In an event like this everyone's so skilled and so good that being versatile is pretty valuable."

Halifax's Alexis Gravel is the only right-catching goalie on Canada's roster and one of only two at the World Junior Summer Showcase and that isn't exactly a fluke.

“Right, but I'm better left," he said with a smile. "Because when I'm a righty I want to swing too hard and the other way I just let it go."
Only five right-catching goalies played in the NHL last season.

"Righty goalies are more rare, but at the end of the day, we don’t have extra gear, it’s the same thing," he acknowledged.

Does the handedness of a goalie impact a shooter?

"A little bit, yeah, I guess," said Veleno. "Maybe in a shootout you're always going towards the blocker and when you're going against a righty it messes you up a bit. That's probably the biggest thing."