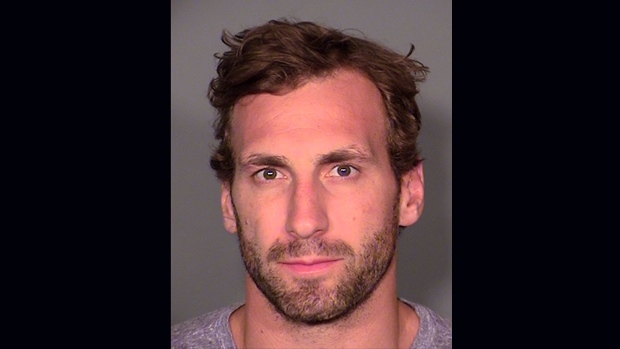 Jarret Stoll was arrested after he was patted down by a hotel security guard, who found Stoll was carrying two small, pink baggies that carried contraband, according to Stoll's arrest report.

On Apr. 17 at approximately 4:33pm pt, two Las Vegas police officers were called to the Wet Republic pool at the MGM Grand casino.

Stoll had agreed to a voluntary patdown upon entering the bar. Security guard Marc James found "an off-white powder in two pink baggies, small baggies, he recognized as contraband, also a clear plastic baggie containing numerous gel caps with an off-white powder inside the caps," says a copy of the police report documenting Stoll's arrest.

Police allege Stoll possessed 3.3 grams of cocaine and 8.1 grams of MDMA, or Ecstacy, when he was arrested on suspicion of drug possession. The Las Vegas District Attorney’s office has not decided if it will pursue charges against Stoll.

The contraband was in the right, back pocket of Jarret Stoll's swimsuit shorts, says the report, which was obtained by TSN.

The police detective who wrote the report said he immediately recognized the white powder to be cocaine. The gel caps with the powder inside were consistent with the illegal narcotic MDMA, or street term "Molly."

Stoll was read his Miranda rights and said he understood them, the report says. He told the detective that the drugs in the baggies was cocaine and was placed under arrest. The report does not say who Stoll was with at the time of his arrest.

After his arrest, Stoll was released on his own recognizance and was given a court date of July 1 at 8:30am pt.

Stoll will probably be able to negotiate a "slap on the wrist," a former state prosecutor told TSN on Saturday.

Michael Pariente, who has been a criminal defence lawyer in Las Vegas since 2006, said he's represented dozens of people accused of drug possession - many of them Canadian - and in every case, the prosecutor has offered first time offenders a plea deal.

Stoll's full arrest report can be seen below: