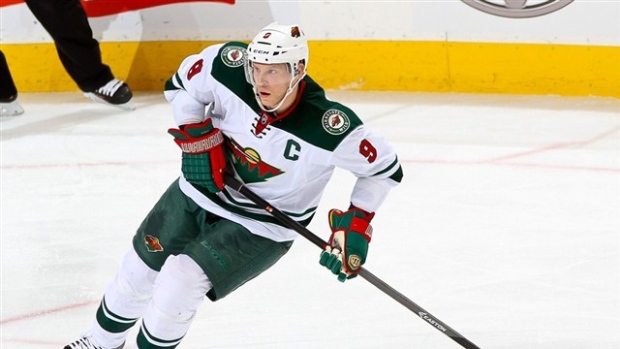 If there's one thing the Minnesota Wild have become known for under head coach Mike Yeo, it's an insistence on rolling four lines.

In fact, the basic tenet of spreading talent through the lineup – as opposed to front-loading the top line with the team's best forwards – underpins almost everything that Minnesota wants to do. The idea is that comparable combinations of talent can both create matchup issues for teams with poor depth, and mitigate the risks of their own depth forwards getting caught in tougher matchups against high-calibre competition.

The team's three highest-paid forwards – Thomas Vanek, Zach Parise, and Mikko Koivu – are sprinkled through the lineup, very rarely seeing shifts with one another. They are individually burdened with the task of elevating the play of their depth linemates in varying situations and levels of competition.

The team's responding favourably. Despite some shaky goaltending to start the year, the team's off to a very respectable 7-2-2 start, largely driven by the team's 5-on-5 success. They are routinely out-shooting and out-scoring their opposition, much as they did one season ago.

If there's one noteworthy year-over-year development in Minnesota, it's the brilliance of the Mikko Koivu group. Koivu's been an exceptional centre for years now, but his run through October was particularly dominant.

Koivu is the big driver for the group's success, but it's impossible not to note that his wingers really do complement his game. Koivu doesn't individually possess blazing speed, but frequent linemate Jason Zucker does. And while Koivu does have some impressive individual skill, it's always a luxury to have a teammate who can create on his own and find the back of the net. Nino Niederreiter, he of the 24-goal season in 2014-2015, is just that.

The trio has terrorized their competition this year, and it reflects in the possession and scoring chance differentials we have observed since the puck dropped a month ago. I've identified the Koivu group (along with other common Minnesota lines, and a few other dominant trios) in the graph below to highlight just how successful they have been. 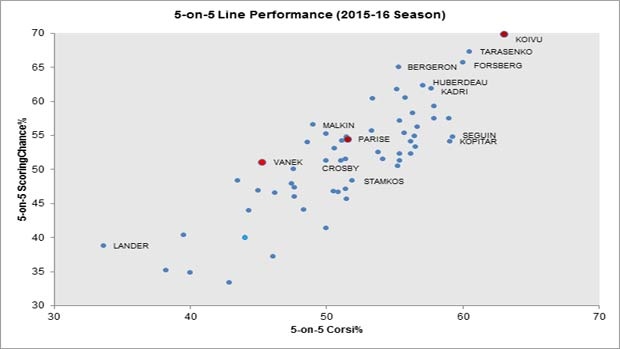 You are reading that correctly. The Koivu line is controlling 61 per cent of play and an absolutely ridiculous 70 per cent of scoring chances through the opening leg of the season (the raw differential is 71-30 in favor of Minnesota when they are on the ice).

As you can see, only a couple of lines have really come close to the excellence observed from the Koivu group. Interestingly, those lines are both from divisional opponents – Vladimir Tarasenko with Jori Lehtera and Alex Steen in St. Louis, and Filip Forsberg with Mike Fisher and James Neal in Nashville. Again, these lines are really just replicating what we saw last season. Their dominance has been repeatable, and that's a great sign for Ken Hitchcock and Peter Laviolette.

The fact that Minnesota's 'other' lines (the Parise group and the Vanek group) are doing reasonably well is also encouraging. The trio Yeo has found with Koivu, Niederreiter, and Zucker has created one of the most dominant lines in hockey, and it did so without sacrificing much on the backend. That's the exact type of optimal line combination you are looking for if you're preparing for a deep playoff run.

Whether Yeo methodically pieced this trio together or stumbled upon it by chance, it's certainly working. So continues the development of the Wild from playoff tweener to legitimate playoff threat in the Western Conference.