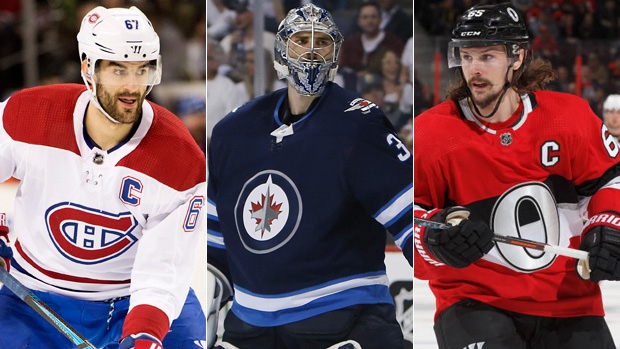 Welcome to NHL Draft week, the official start of the summer trade season.

Monday marks the moment when the rubber hits the road for the 2018-19 season. It’s the start of two of the best weeks of the year, when hope springs eternal for all 31 teams that the moves made now will one day pay off in a parade.

Here is a reset of the top three priorities for each Canadian team heading into the draft and the summer beyond:

1. Do the Right Thing: The Flames were top-heavy with the top line scoring 76 goals and the next two combining for 82. They need a right-shooting right winger to add to the mix, since their top eight scorers from last year were all lefties.

2. Fortify the Middle: Keep an eye on free agent centre Derek Ryan, whom Bill Peters helped blossom into the ideal depth pivot with 15 goals and 38 points last season in Carolina.

3. Save Smitty: A bona-fide backup is critical for 36-year-old Mike Smith. It’s not a stretch to the say that Calgary’s playoff hopes were extinguished with a quarter season of David Rittich between the pipes with a .904 save percentage.

1. Power Play Quarterback: Connor McDavid is the NHL’s first-ever scoring champion from a team with the league’s worst power play. Imagine the possibilities if the Oilers nabbed a right-shooting power play quarterback on defence to feed left shots like McDavid, Leon Draisaitl and Ryan Nugent-Hopkins.

2. Hit on No. 10 pick: In case there is any hankering to move a critical first-rounder, a reminder that Peter Chiarelli’s last three June trades – involving Jordan Eberle, Taylor Hall and Griffin Reinhart - haven’t worked out so well.

3. Turbo Boost: Kailer Yamamoto is the in-house candidate to provide wheels next season, but the Oilers could use an extra burst of speed from the outside – even if Chiarelli disputed again recently that Edmonton played slow last season.

1. Decisions at No. 3: NHL scouts say this week’s draft really starts with the Canadiens at third overall. While left winger Filip Zadina once seemed like the likely pick, Finnish-born Jesperi Kotkaniemi – the top-ranked centre on the board – could solve one of the Habs’ biggest problems down the middle.

2. Top Four Left ‘D’: The Habs totally rebuilt the left side of their blueline last summer and they need to do it again. Montreal needs a top-four defenceman who can log impactful minutes next to Shea Weber, a piece that might have been in the cards if Alex Galchenyuk was part of the package.

3. Pacioretty: Stay or Go? It was an awkward end of the season for captain Max Pacioretty, who almost seemed like a foregone conclusion to be dealt this summer. The question is now how much the Galchenyuk trade changes that, if at all. If the Canadiens see Max Domi as primarily a centre, then moving Pacioretty might suddenly create a hole on the left side, especially after already moving out Galchenyuk’s goals.

1. Focus on Karlsson: Whether it’s with an extension on July 1 or a trade before or after, how the Erik Karlsson situation is managed will set the course of the Senators franchise for the better part of the next decade.

2. First-round picks: The Senators have until before the No. 3 overall pick is made to determine whether they’d like to convey this year’s No. 4 pick to Colorado to fulfill the Matt Duchene trade terms. If not, next year’s will automatically convey. And if it makes the decision any easier, even if the Senators finished 31st next season the most likely scenario is to pick fourth, based on the odds. (They also have Pittsburgh’s pick at No. 22 this season.)

3. Cut ties with Hoffman: Everyone around the Senators fully expects Mike Hoffman to be traded - the only questions are when and where. To be sure, Dorion will be selling for pennies on the dollar, which hurts for a 26-goal scorer, but it’s in the best interest of the franchise to do it sooner rather than later.

1. Now or Later? William Nylander is due a new deal as a restricted free agent. Do the Leafs also want to get new contracts done with Auston Matthews and Mitch Marner this summer or wait until next summer? There are pros and cons to both. The biggest pro is knowing what the team’s long-term salary cap picture looks like.

2. Bolster the Blueline: The quest to find the right-shooting defenceman that will help push the Maple Leafs over the top has been ongoing for a couple years now. Up until now, the Leafs haven’t been willing to move a foundational young player to make that happen. One might hit the market in John Carlson, but the Leafs likely won’t have the cap space to pull it off (See No. 1).

3. Replacing JVR: Toronto is going to have to calculate where the 36 goals James van Riemsdyk scored this season will come from, as he won’t be returning. JVR accounted for nearly 13 per cent of the team’s total offensive output.

1. Seven out? The Canucks’ No. 7 overall pick has been linked in discussions with Carolina as part of a deal for 21-year-old defenceman Noah Hanifin. GM Jim Benning has scooped up Brock Boeser (2015) and Elias Peterson (2017), the heir to Henrik Sedin at centre, in the first round, so if the Canucks decide to move the pick it might say more about the players he believes are available.

2. Consider Veteran Shakeup: Trading away the best veteran assets, in Alex Edler or Chris Tanev, might not be the Canucks’ worst idea since they’ll be in their early-to-mid 30s by the time this rebuild comes full circle.

3. 2019 NHL Draft: The Canucks are hosting next year’s draft. Learning how to lose strategically – instead of going 6-1-2 down the stretch like this year - could help land Jack Hughes at No. 1 overall.

1. Take care of Business: GM Kevin Cheveldayoff and cap ace Larry Simmons have their work cut out for them putting this salary cap jigsaw puzzle together. Vezina finalist Connor Hellebuyck is top priority as a restricted free agent, followed closely by Josh Morrissey and Jacob Trouba, then Joel Armia and Adam Lowry.

2. Blueline Balance: The Jets are one of the few NHL teams with a glut on the right side of their blueline. They need to find balance and that will mean one of Tyler Myers or Trouba switching over to the left to better the team. Or, if they’re not willing, it could create a situation where one of them is on the move for that balance.

3. Summer of Laine: For Patrik Laine, this can’t be the summer of Fortnite. Laine, 20, hit 44 goals last season, but people around the Jets say it took him a good six weeks to get up to full speed. A summer with Mark Scheifele would be one well spent.