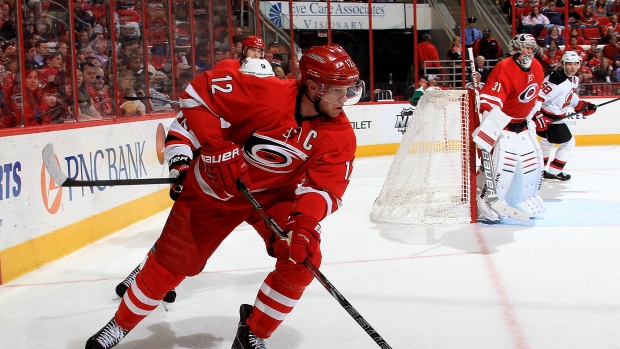 The Carolina Hurricanes have emerged as the team to watch from an Insider perspective.

Decimated by injuries - including those to Eric and Jordan Staal - the Hurricanes remain the only NHL team without a win and even though the club has considerable time to make up ground, some around the league label the Canes as the early favorite to make a significant change this season.

Ten days ago, Leafs nation was jolted by a suggestion on Insider Trading that Eric Staal could one day be a Maple Leaf. The information was based on the Leafs' interest in the Carolina captain which the Leafs explored months ago, yet there has been no change in that level of interest since.

However, Staal's commitment to the team, his brother and the Carolina community also hasn't changed, so while some remain confident Staal may one day consider a move, it's also possible that day never comes. The primary reason being, with a healthy lineup, Staal and management believe Carolina is much better than its woeful start indicates.

Staal is said to be progressing and may return from an upper body injury as early as Tuesday and Nathan Gerbe should also be in Tuesday’s lineup, so help is on the way.

Peter Karmanos is known as a budget-conscious owner. If things don't improve dramatically, the likelihood increases Karmanos puts heat on rookie general manager Ron Francis to trim the payroll that current stands at $66.2 million (according to capgeek.com). This seems somewhat obvious given the fact the Hurricanes invested money this season to put together a more competitive team.

Francis will preach patience, soundly supported by not having his top two centres, a crippling blow for any NHL club. The longer Carolina waits to make a significant deal, the more money that is paid down in salaries, which may not be budget friendly, but could lure a larger collection of bidders - including cap-strapped contenders - if a key piece like Staal is legitimately in play.

What we know at this point is; Staal is not going to be the one to come out and say he wants out.

The Calgary Flames remain in rebuild mode, strongly interested in making deals for age appropriate assets and are keenly motivated to strengthen the organization through the draft and development. Yet, as enticing as potential franchise players Connor McDavid and Jack Eichel might be, the Flames brass insists winning trumps everything.

Calgary has won five of their first nine and sits third in the Pacific Division with 11 points, just one point shy of league leaders Montreal, Anaheim and Nashville. The Flames weren't supposed to be able to score yet, early in the regular season, this hard-working group ranks 16th in goals for with 2.67 per game, above the likes of Los Angeles, St. Louis and Boston.

Brian Burke says he's not surprised by his team's impressive start, directing praise at the Flames' goaltending and a work ethic he gives head coach Bob Hartley credit for instilling.

The notion Calgary is doing a disservice to its long-term plan by winning is dismissed by the president of hockey operations. Burke is as insulted by the suggestion of tanking today as he's ever been, and says he would support strong penalties against any club found guilty of doing anything other than trying to win. This comment is consistent with the opinion Burke shared on tanking during a TSN 1050 radio interview in March.

Nine games is hardly a sample size worthy of planning a postseason party, but the early success does fall in line with Burke's belief teams in transition should still be competitive and entertaining to watch.

Here's another story to add to the Steven Stamkos file. We all know Stamkos' commitment to training in the offseason is second to none. This past summer, Stamkos approached his routine under the supervision of fitness guru Gary Roberts with his usual intensity and machine-like execution, despite the fact he was hampered by a surgically inserted screw nearly protruding through his skin - the remaining piece of hardware used to stabilize a badly broken leg. Roberts recalls one particular workout designed around what was supposed to be a light run because of lingering issues with his leg, where after limping into position, Stamkos shredded the track and posted a time of 10.5 seconds over 100 metres. As a point of comparison, top Canadian decathlete Damian Warner recorded a personal best of 10.29 seconds this past July in Glasgow en route to winning the decathlon at the Commonwealth Games.

The architects of the NHL's long change and pre-overtime dry scrape are rallying behind this week's surge in games decided in overtime. To date, 11 of the 25 games that have gone past regulation have been settled in OT rather than a shootout. Last season, only 8 of 25 were decided in overtime.

Now, as satisfied as those who pushed for the OT tweaks might be, the AHL's 3-on-3 experiment continues to produce impressive results. Eight of the 16 overtime games played this season have ended 3-on-3. Six have ended in 4-on-4 and just two of the 16 have required a shootout.

Rest assured that Red Wings' GM Ken Holland, a strong advocate for 3-on-3 hockey, is pleased with these results.

Darren Dreger and the TSN Hockey Insiders will have another edition of Insider Trading on Tuesday on Sportscentre and TSN.ca.