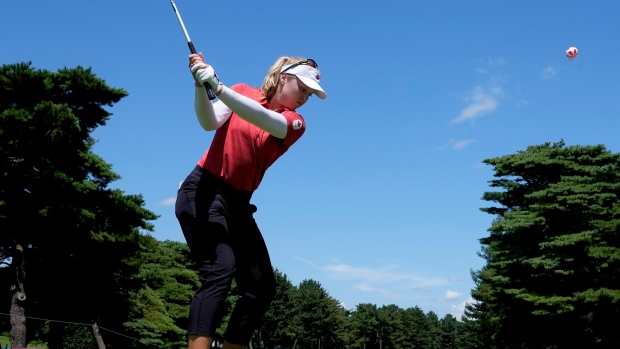 Five years ago, Brooke Henderson arrived in Rio with the weight of a country on her shoulders. It was a load the teenager simply couldn’t carry, despite a valiant effort. Despite some great play, she ended up tied for seventh.

This time around, she’s older, wiser and more experienced. As she prepares to tee off for her second Olympics, the expectations of Canadians haven’t changed, but she has.

“I feel like I learned a lot down in Rio,” she said this week from her hotel room near the Kasumigaseki Country Club. “I was only two shots out of a bronze medal, especially down the stretch on Sunday. I feel like being in the Olympics and the different pressure it does present, I learned how to handle it a little bit better. So, I’m hoping to bring in some of that experience to this year, but you know, at the end of the day there are 60 players and anybody can be on that podium.”

Henderson has arrived here arguably as one of Canada’s highest-profile athletes. She has already won more tournaments than any other Canadian, male or female.

In her brief career, she’s made the cut in 150 of 165 starts and 64 top-10 finishes. Those are astonishing numbers for any golfer but especially eye-popping for one who is 23.

What endears her to the nation, however, is more than her talent. It’s her character, personality and attitude. She always seems to say the right thing and to pass the gratitude on to others, whether it’s a senior citizen or a youngster. She is always praising others before herself, including her older sister, Brittany, who serves as her caddie.

This week, she praised the performance of the Canadian women athletes who have garnered the majority of medals so far, calling it inspiring. She also sang the praises of the men’s team, made up of Corey Conners and Mac Hughes.

In an era when some athlete can be boastful, pompous and self-centred, Henderson is almost too good to be true, although this is definitely who she is. There is nothing phony about her.

“I’m really excited to be here,” she said. “I’m honoured and proud to represent Canada. Every week on the LPGA Tour I feel like we’re representing Canada, but here at the Olympics it’s the biggest stage for an athlete to be on.”

Henderson may not be viewed from the same Olympic standpoint as an athlete such as Penny Oleksiak or Andre de Grasse. For them, this is the pinnacle of their sport. Golf is still trying to create its Olympic foundation after returning to the Games in 2016 from a 112-year lapse. For most players, the majors are still ahead of the Games in importance although that is changing.

While the men’s field last week was missing some top-ranked golfers who seemed disinterested, the women’s field is littered with stars. It’s not as deep as a regular tournament with the limitations on the number of players per country. But that won’t make things any easier to win a medal.

“Rankings and past wins on the Tour really don’t mean anything this week,” stated Henderson. “You really have to go out and make a lot of birdies and make something happen. I feel like that’s the mindset we have going in. Anyone can win this week.”

As the men’s event showed, aggressive play is rewarded. In Olympic golf, fourth place is the same as 60th. There’s no cut to make, no high finish to preserve a cheque and no points towards season-ending awards. It’s full speed ahead.

That plays into Henderson’s hands, as she is never one to hold back. She really only has one gear.

“I think I play better when I’m aggressive,” she said. “So, I’m looking forward to chasing some pins when the opportunities present themselves.”

She and fellow Canadian Alena Sharp have prepped for the tournament with practice rounds and a meeting with Conners and Hughes who shared their knowledge of the course. Canadian men’s coach Derek Ingram also gave them a detailed guide on each of the holes they’ll face.

“It just takes four solid rounds of golf and a lot of birdies, so hopefully Alena and I can go out there and make a lot of birdies and make those clutch par saves when we need to and climb up the leaderboard on the weekend,” stated Henderson.

A medal would only add to the wonderful story the Smiths Falls, Ont., product has written so far. It’s one that seems destined for a happy ending.