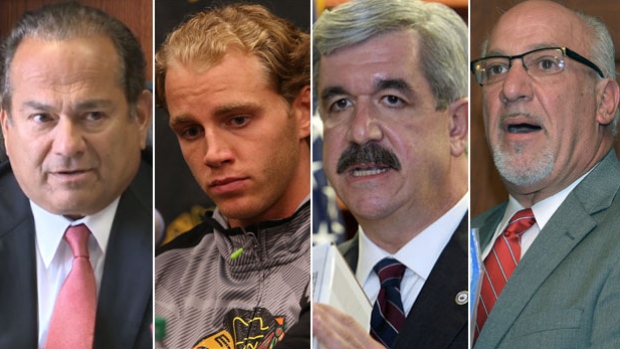 Presiding over what Erie County District Attorney Frank A. Sedita III described as a "dog and pony show," the multitude of press conferences this week have everyone's head spinning with information overload.

Here are five things you need to know after Sedita publicly addressed Patrick Kane's case for the first time on Friday morning:

1. Kane is still under active investigation.

As Erie County's chief prosecutor, Sedita has not made a decision whether or not to charge Kane with a crime. Kane is still being investigated for an alleged sexual assault which may have occurred at his Hamburg, N.Y., home on Aug. 2.

In other words, Kane remains in the same situation now as when he arrived at Blackhawks training camp last week. Kane, 26, has not been charged with any crime, but he is still under investigation.

2. The purported discovery of a brown paper evidence bag was an "elaborate hoax."

Sedita held the press conference to re-instill public confidence in the judicial system, displaying video and photos to demonstrate the chain of custody of the evidence collected from the rape kit performed on the accuser on Aug. 2. Sedita said that the kit was collected in a box and not a brown paper bag, and that the contents are in their original packaging in possession of Erie County Central Police Services.

Sedita revealed the accuser's mother accompanied her daughter to Erie County Medical Center to be examined. The accuser's mother was handed a brown paper bag by a nurse, which was to be taken home, so a shirt the accuser wore on the night in question could be included as evidence.

The accuser's mother never returned the brown paper bag with the top, according to Sedita, then purportedly took the bag to the accuser's lawyer and said it had been left in the doorway of her home anonymously.

"We believe the complainant's mother has engaged in an elaborate hoax," Sedita said. "The bag was never left in the door."

Sedita said he knew from the moment the accuser's lawyer held a press conference detailing the bag, it was a "red herring," or something intended to be misleading.

Sedita could not speak to the accuser's mother's motivation as to why she would purport the bag to be anonymously left in her doorway.

Sedita also said the lawyer for the accuser, Thomas J. Eoannou, who withdrew from the case on Thursday night after learning the truth about the bag, "recklessly" held a press conference before consulting with the District Attorney about the bag.

3. A decision whether to send this case to grand jury still looms.

Last month, reports indicated Kane's investigation was set to go to an Erie County grand jury, where 23 citizens would decide whether or not the investigation had enough merit to warrant charges. That is not guaranteed to happen.

Now that Sedita established Friday that the evidence has not been tampered with, he must decide whether to seek the counsel of a grand jury, and how much of an impact the brown bag "hoax" has on the case.

The investigation could continue for any length of time, from days to weeks to months to years, before that decision is made, according to Sedita. Sedita said he wants to consider and investigate the impact of the "elaborate hoax" on the case.

Sedita also said the timeliness of the decision also depends on the evidence, whether more evidence needs to be gathered or tested, and the cooperation of witnesses.

4. Sedita confirmed that initial results from DNA tests were delivered to counsel for both sides.

Citing a historical precedent, "Brady vs. Maryland," Sedita said he had an obligation to notify both Kane's attorney and the accuser's attorney of results of the DNA tests from the evidence in the rape kit. Sedita said the "ethical obligation" exists if the results of the test "may exonerate" or be favorable for the accused, or in this case, Kane.

Sedita would not answer further questions about the results of the testing, citing New York State law. He also chided the sources of leaks to the media about details relating to the evidence.

"This office is not responsible for this circus," Sedita said, referring to press conferences from Kane's and the accuser's lawyers, which stoked the flames this week. "I am fully confident that we have complied with all of the ethical obligations of this office … We tried to not turn this into a three-ring circus."

5. The brown paper bag "hoax" may have zero impact in the investigation.

"Sins of a mother or father are usually not transferable to a daughter or son," Sedita responded, when asked whether the accuser's claims will be discounted because of the actions of her mother to fabricate the appearance of the brown bag.

While Sedita said he still needed to conduct an investigation to see what role, if any, the accuser played in the "bizarre hoax," Sedita said the woman's claims from Aug. 2 will still be thoroughly examined.

The accuser's mother is also unlikely to be charged with a crime since she did not give false statements about the bag under oath, but only to the family's lawyer.