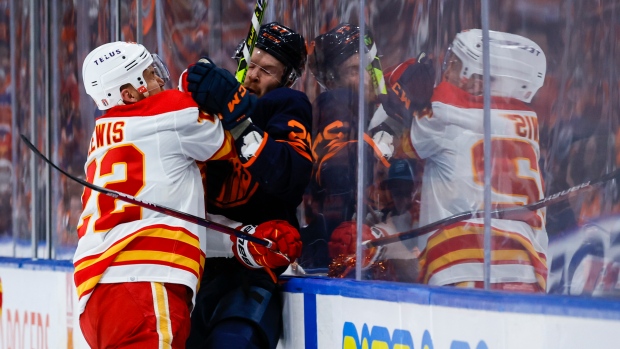 Throughout the 2021-22 season, the Calgary Flames’ identity has been all about how they can roll four lines, play a tight-checking game (as opposed to simply defend), and play with pace and grit.

The Flames will rely on all they have built since training camp in September as they attempt to extend their season with a victory at home tonight in Game 5 of their Western Conference semifinal against the surging Oilers. Edmonton leads the best-of-seven series 3-1 and can eliminate Calgary with a victory tonight at the Saddledome.

“It really has to be complete team effort if we're going to get a win here tonight,” top-line forward Matthew Tkachuk said.

“Just start with one, use our home crowd to our advantage and get everybody going early and see what happens.”

Much of the difference in this series has been the level of play of Edmonton’s stars versus Calgary’s star players. Since Game 1, Connor McDavid, Leon Draisaitl and Evander Kane have combined for 23 points, while Johnny Gaudreau, Matthew Tkachuk and Elias Lindholm have just five.

Sutter also praised Tkachuk’s effort while saying he could use his tools more.

“I think just his skill-set [and] using it more to his advantage,” the veteran coach said.

“It’s got nothing to do with effort or anything like that with any of our guys that haven’t been as productive after Game 1 of this series, but you have to give Edmonton credit in that, too. Maybe our guys are doing all they can, maybe Edmonton’s just a little bit better right now…nobody’s talked about that. It’s always been about the negatives. What about the good stuff that’s going on.”

With their backs against the wall, the debate right now is whether the team will continue sticking with its style of play, or adapt to its opponent.

Sutter hinted at some on-ice changes for Game 5, but said that he would not stray too far from the identity he’s worked hard to build with this group during the past eight months.

“There might be some different approaches, but you’re not calling in plays,” Sutter said.

“It’s not where the defence goes off and the offence goes on, or we change innings.”

There will also need to be a high level of desperation emanating from the Flames.

“Our backs against the wall, in the corner up against the ropes,” forward Milan Lucic said.

“If you look at, ‘Oh we’ve got to win three games.’ In order to win three games, you have to win one game…we’re going to need that same desperation we had in that Game 7 versus Dallas, said Lucic. “What I said before that game is that you need big plays from big-time players.”

Much has been said about what could change after this season for the Flames. Gaudreau (unrestricted) and Tkachuk (restricted) are pending free agents. The tight-knit Flames roster may look very different come fall.

“I really enjoy playing with all these guys in this locker room and we have a good group in there,” Gaudreau said.

“It's been fun all year long. Every guy is really motivated in there.”