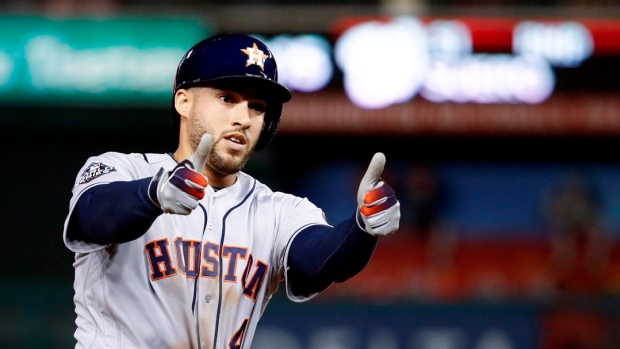 TORONTO — Picture this: An organization that has a reputation as a developmental machine and can regularly churn out big league players, but one that also has the money and resources to keep those homegrown stars around with lucrative, long-term contracts, as well as supplement the roster each and every off-season.

A drafting-and-developing track record and deep pockets is the most powerful combination in sports, and it’s one that the Toronto Blue Jays are suddenly flexing to the surprise of some.

This was always the plan.

Take a handful of years to put the developmental processes in place, build a base of young talent, tear down and discard high-priced veterans, then build it back up, being careful to also time it all up perfectly.

The building started last year with an $80-million investment in Hyun-Jin Ryu.

It was fully expected to continue this winter, and the Jays were fortunate that their top target all along, George Springer, had mutual interest.

With the payroll now approaching $140 million for 2021, it won’t end with Springer, either, but the latest big step in Jays president/CEO Mark Shapiro’s plan was finally wearing Blue Jays colours Wednesday during his introductory presser.

There’s no secret what lured Springer from Houston to Toronto, even with the Connecticut native’s hometown New York Mets making a pitch: Money and the opportunity to win.

“When you have a young, talented group that’s already in place, it’s obviously very, very attractive because you know what they could potentially do,” Springer said.

Expectations are now sky-high for the Jays and it’ll be that way for the foreseeable future.

The Toronto Blue Jays are no longer a little brother in the American League East and they’re no longer a rebuilding team just happy to have an intriguing core of kids, either.

Year in, year out from this point forward, the expectation and goal for this ballclub every spring is World Series or bust.

There are no “good stepping stones” or silver medals coming off an above .500 season, albeit a shortened one, and then proceeding to hand out the largest contract in franchise history to push that forward.

While far from the last piece to the puzzle, Springer could be the final core lineup building block if things go smoothly, and the fit has been obvious for a long, long time.

“Our attraction to George Springer was several years ago where it began,” GM Ross Atkins explained. “I think any executive in baseball that has watched George play for some time would love to talk about how he’d fit onto your team. And when you start to think about the middle of the diamond and centre field, that being the best player on your team, that’s really exciting to think about. It is a very good fit. George’s impact on both sides of the ball, the defender he’s been, the offensive player he’s been, the base-running capability.”

A perfect fit on the field and in the clubhouse, it was clear from the start of free agency who the target was.

The big question was whether they could convince Springer they were the right partner and get a deal done.

Despite the obvious need in centre field and the exciting power/speed combo, there are intangibles Springer brings that this Blue Jays clubhouse simply did not have before.

“Dependability, reliability, consistency, and then fit,” Shapiro said. “Ross has talked a lot about we had certain attributes and characteristics and skillsets that we were looking for and George was the guy that was clearly a good fit for this team, for this city, for this country, and for [where] we are right now. His experience will add a certain level of wisdom to our players. He’s been places where our guys haven’t been yet and he knows how to handle those environments.”

Objectively, Springer has been named to three all-star games, garnered MVP votes in three separate seasons and has been a well above average hitter statistically in each of his seven big-league seasons.

The track record of health and consistency is one you’re willing to commit to.

There really isn’t a red flag in the profile at this point.

So where does the plan go from here?

In the short term, over the next handful of weeks leading into spring training, the goal is to add to the starting rotation, the clear roster need at this point.

Trevor Bauer has finally been crossed off the board as the budget gets tighter, but there’s still room to improve, according to Shapiro.

“We’ve got some flexibility, but the bulk of our heavy lifting is done,” Shapiro said. “There’s still opportunities for Ross and our baseball operations group to be creative in what they do.”

A trade is the most likely route to finding a top-of-the-rotation starter, but there still seems to be ways to add a James Paxton, Jake Odorizzi or Taijuan Walker, especially if they’re open to one-year deals once the calendar flips to February.

The more intriguing question, perhaps, is what’s the next step of this long-term plan?

There are more planned budget increases coming and the expectation is a franchise record payroll is on the horizon, which will exceed the $165 million or so spent a few years ago.

“That plan is that we’ll continue to win and as we win the revenues will increase and where those dollars go, I think, there’s no limit to what this market can be — it’s a behemoth,” Shapiro said.

With a cornerstone player added to the outfield and a deep group of homegrown kids either already patrolling the infield or on their way, the next building block is likely to be that elusive ace that each and every eventual World Series winner has to go out and find.

The significant amount of money coming off the books after the season combined with another payroll bump will have Atkins fishing in the big boy pond once again.

One name to consider next winter is Noah Syndergaard, an arm we already highlighted here as a target.

Another scenario to consider is giving an already much-improved Jays team the first half of the 2021 schedule to show they’re ready and then go out in July and use that prospect pipeline to acquire whatever ace happens to hit the trade market.

Since it’s already been a winning off-season for the Jays’ front office, there’s no reason to deviate from the plan now.

It’s one that seems to be coming together at the right pace.