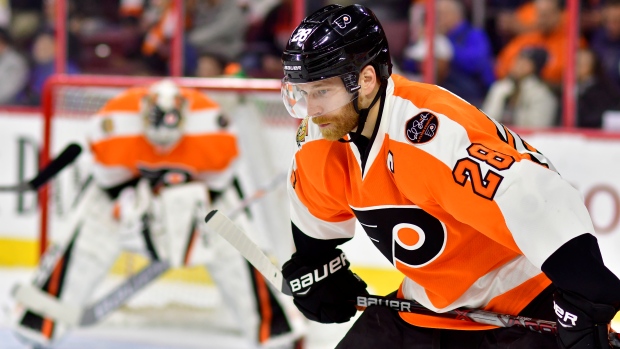 Much of the debate around this year’s Hart Trophy race has been about whether an elite player on a non-playoff team is worthy of consideration.

That’s understandable this year. Connor McDavid – for my money the NHL’s most talented player in 2017-18 – has had an amazing year on a woeful team. Nathan MacKinnon and Taylor Hall, who are having comparatively strong seasons, play for teams that are right near the playoff cutline. All three players share the same argument, more or less: that their team would be substantially worse with them out of the lineup and that they have injected heaps of goals and wins into the standings.

And yet, there’s a good argument to be made that the guy who has added the most goals (and the most wins) to his team isn’t in the trio above. It’s Philadelphia’s Claude Giroux.

One of the great things about newer hockey data is we can start to understand how team’s perform with or without players on the ice. We know all of these guys collect points in bunches and are integral to their team’s success. But if you’re trying to get a feel for which teams were most reliant on any given player, you can measure how each unit fared with or without a player across all game states.

So what we are doing here is simple – we are comparing how each team scored goals with a player on the ice versus a player off of the ice. The idea here is that if the player simply did not exist, the team’s normal goal-production rates would exist 100 per cent of the time. From there, we can start to understand just how many goals a player added (or subtracted) from his team’s overall goal differential.

Let’s break it out by game state. We will look at the top 15 around the league, starting with even-strength. A quick reference glossary first:

I think qualitatively if you asked most hockey fans which lines were most offensively impressive this year, you’d hear the McDavid line (regardless of who he was playing with) and the Vegas line (William Karlsson, Jonathan Marchessault and Rielly Smith) so it’s encouraging that our first pass at this analysis sees all three of those guys in the top three. Granted you are going to have difficulty differentiating value between players like Karlsson and Marchessault (as just one example) because of how much time they played together. Nevertheless, you can see that all 15 of these guys were substantial goal drivers relative to team norms all season long.

(Quick side note: I think Auston Matthews, if he doesn’t miss such significant time, is in the Hart race too. He’s had an amazing, if shortened, 2017-18 season.)

Giroux appears on this list, having added 28 goals above Philadelphia’s average. That’s a huge number but it’s still considerably behind the top of the leaderboard – the top three guys we named were about 14 goals better, which is worth about 2.5 wins in the standings. That’s a material difference.

Let’s move on to the power play now.

Giroux has been an absolute machine on the power play. And while that’s more generally true for Philadelphia’s first power-play unit, you can see that he’s decisively ahead of any of his teammates on this front and by a considerable margin – 44 goals better than Philadelphia’s normal power-play operation with him off the ice and 11 goals clear of the next best teammate. I can’t think of a better way of emphasizing this, though, than to point out that he somehow is ahead of Alex Ovechkin

And yes, you are reading that right. Philadelphia was outscored on the power play in situations where Giroux was not on the ice.

This, by the way, is what hurts McDavid’s candidacy to a small degree. The Edmonton power play has been a joke all season long and although I don’t pin much of it on the Oilers superstar, he ranks 229th in the league by way of goals added on the power play. The Oilers were +16 goals with him on the power play and +8 without, and he played nearly 67 per cent of total minutes.

Lastly: if you are a Hall or MacKinnon voter, again you should be encouraged. There’s compelling evidence that New Jersey and Colorado, again, were very reliant on these stars to carry them.

Let’s end this with the penalty kill:

Unfortunately none of our big Hart Trophy candidates finished atop the leaderboard, though some of the big names did save goals on the penalty kill too – more on this in a minute. I did want to point out Alex Barkov’s presence here. I’m not sure Barkov is in the top tier of Hart candidates but I think he’s definitely deserving of recognition as one of the league’s elite two-way centres at this point. Performance like this certainly cements those arguments.

But now what we have all waited for – a roll-up of all of those goals added, by game state, for the top 15 players in the league. Here is what that looks like:

It’s worth noting a couple of other things here. One, no player has a larger gap from #1 to #2 than Hall in New Jersey. He’s 27 goals clear of his next best teammate which is sizably disparate from a player like Giroux. If anything it lends more credence to the argument that Hall really is a one man band in Newark.

That should be taken into consideration when making a similar argument in support of McDavid. McDavid grades out as probably the best 5-on-5 player in the league but again, the power-play performance really does kill him relative to some of the other Hart candidates. You can chalk up Edmonton’s ghastly odd-man performance any number of ways but the reality is they just didn’t produce like most other units in the league, and that’s the sort of stuff that can turn a Hart winner into just a guy who received a decent chunk of votes.

Lastly, I’m really not sure what to do with the Vegas or Boston duo and I doubt the voters will know either. Marchessault/Karlsson and Bergeron/Marchand lit the world on fire all year and I’m not sure they will have much to show for it individually, though both teams are at least going to be favourites to advance into the second round or further. You wonder, considering the data is now available, if we will ever have a ‘best line’ or ‘best pair’ award. I’d certainly endorse that move.

I’ll end with one final caveat – this analysis is not a smoking gun. It’s blind to (among other things) teammate quality, playing environment, depth competency, and so on. Players in better situations will see improvements in performance regardless of how well they are playing, and that must be taken into consideration. And elite players on very strong teams top to bottom – think Nikita Kucherov and Steven Stamkos in Tampa Bay – won’t see as meaningful results, since their off-ice numbers will still be very strong. These things must be taken into consideration.

But how can you look at this and not seriously consider Giroux for the Hart?