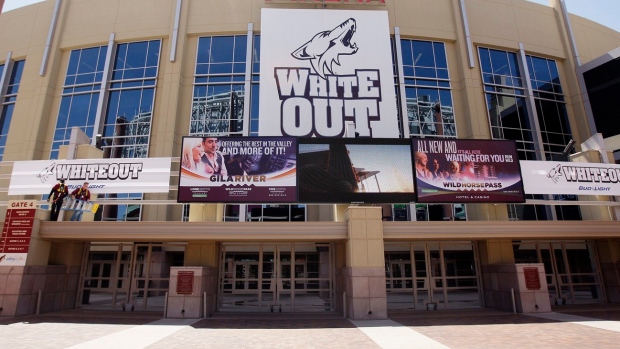 During a special meeting convened Wednesday night that featured threats of a $200-million lawsuit and emotional fans wearing team jerseys, city councillors in Glendale, Arizona, voted to cancel the arena management contract that sees the city pay $15 million a year to the Arizona Coyotes.

The decision leaves the future of the struggling NHL team very much in question.

Without the revenue from the arena contract, a team that is already widely believed to lose more than $30 million a season will see its losses further widen. Speculation has already started about how soon it might be until the team leaves the Phoenix market.

In June of 2013, the NHL said went so far as to say the team might move to a different city in time for the 2013-14 season if Glendale did not approve the contract. Days later, council approved the $225 million contract that was cancelled on Wednesday night.

Wood said the Coyotes will file a $200 million lawsuit.

In an interview on Hockey Night in Canada before the final vote, NHL commissioner Gary Bettman said, "I'm not concerned about the Coyotes. If I lived in Glendale, I'd be concerned about my government."

The city council meeting latest nearly two hours and featured comments from city councillors, residents of Glendale and Coyotes fans who live in the Phoenix area. As the Chicago Blackhawks were closing out their 2-1 victory over Tampa, Glendale council voted 5-2 to kill the arena deal.

“This is not about hockey,” said vice mayor Ian Hugh, shortly before the vote. “It’s about the integrity of the process.”

Mayor Jerry Weiers, who had to briefly threaten to remove hecklers from the audience, said, “I don’t care how good a deal is. If you’re breaking a law you’re breaking a law.” Three sports investment bankers who specialize in NHL team sales told TSN it's questionable whether the Phoenix market is big enough to sustain an NHL team, particularly without the $15 million arena management agreement.

Last season, according to one source with a copy of the NHL's combined Unified Report of Operations (URO) the Coyotes generated less than $25 million from ticket sales, while the average NHL team generated about $48 million.

The departure of former city attorney Craig Tindall's from his position more than two years ago was central to the argument to cancel the agreement.

Tindall was asked to resign as city attorney in February 2013 by Weiers. Tindall left his position on April 1, 2013, but accepted six months of severance, meaning he was on the city payroll through Oct. 1, 2013.

It’s unclear what will happen after the Coyotes file litigation against the city.

A bigger issue would be the loss to other NHL team owners of expansion fee cash that’s anticipated in Quebec.

There is a also third option.

A former NHL team owner would only speak on the condition of anonymity because he is in talks to buy a minority interest in another NHL club said that the NHL might direct the Coyotes owners to put the team up for sale, allowing new owners to start fresh negotiations with the city of Scottsdale, another suburb of Phoenix that is more affluent than Glendale.