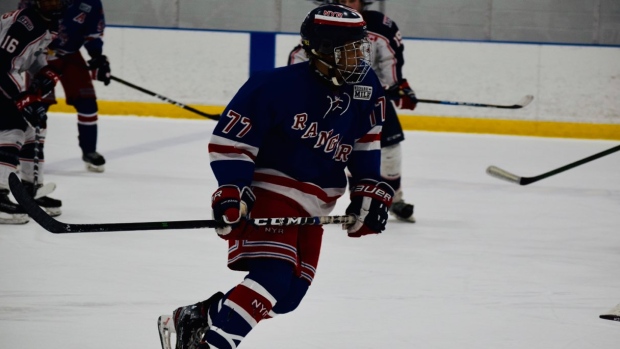 Myles Douglas in action this season with the North York Rangers of the GTHL , The Douglas Family

The Greater Toronto Hockey League, the world’s biggest amateur hockey league with more than 40,000 players, today disclosed details of how many player penalties have been called over the past three seasons for discriminatory slurs.

The GTHL said the gender category includes “slurs and taunts such as ‘you play like a girl’ and other more graphic comments.”

In the past three seasons, GTHL referees have called penalties for 20 racial slurs.

The GTHL has refused to disclose that information before now, saying that, because the players are minors, it has been following privacy policies of school boards. It also argued that disclosing the data would damage the reputation of the vast majority of the league’s players.

“The last couple of weeks, we’ve heard from parents and players in our league about challenges they’ve faced as being participants in our league,” GTHL executive director Scott Oakman said in an interview with The Athletic. “And the need for us to consider the position, given the greater desire to be appropriately transparent. We took that response to heart, and we decided that it was important to put the numbers out.”

Oakman did not respond to questions emailed by TSN.

It's unclear why the GTHL did not disclose information for other seasons.

The GTHL said in a press release posted on its website that it will hold a virtual town hall meeting with players, coaches and parents and other stakeholders to discuss discrimination issues. A date for that meeting has not been announced.

The GTHL is also creating an independent committee to confront racism in the league.

In an interview posted May 22 with TSN, 16-year-old Myles Douglas, a forward with the Triple- A North York Rangers, said he was targeted with racist abuse in at least half of the games he played in the GTHL this season.

The GTHL told Douglas and his mother that it will hire an independent investigator to examine his claims.

More than 10 other families shared stories of their children being victims of racial abuse with TSN, but did not want to talk publicly because they worried their kids would face blowback.

Weekes, a GTHL graduate and now a broadcaster with the NHL Network, said he wouldn’t mention the league’s name on air again until it changed its policy.