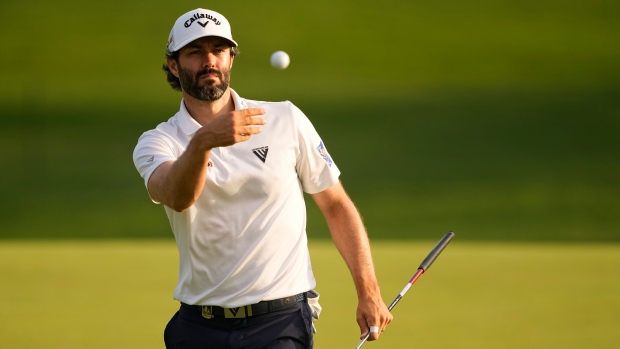 High expectations for the Canadian contingent at the PGA Championship were blown away on Friday as only Adam Hadwin managed to survive the 36-hole cut at Southern Hills Country Club.

One of the pre-tournament favourites, Corey Conners, and Mackenzie Hughes, who has battled for several major championship titles the last year, were both well outside the cutline which came at four over.

Hadwin held on to his second round with a one-over 71 to get through to the weekend, making the cut on the number. The Abbotsford, B.C., product played his first seven holes in one under before making bogey on three of his next four. A final birdie on the fifth hole (his 14th) left him on the safe side of the cutline.

“It was kind of a tale of three separate sections,” he admitted. “Started off really well, hit the first five greens in reg, had some good looks. Then had some trouble finding fairways which led to trouble finding greens, the next six greens, but I bounced back and hit the next six.”

Hadwin battled the stiffest of the winds, which gusted to more than 50 km/h in the morning. Pulling a club became a chore and Hadwin and caddie Joe Cruz had numerous conversations before making a selection.

“A lot of it is just a big giant guess,” he admitted. “Don’t let us kid you guys. We’re picking a number and we’re hoping it’s right.”

Even when he missed the green, Hadwin was able to recover a majority of the time, saving par on five of eight opportunities. While he was happy to be playing the weekend, he wasn’t completely pleased with his game over the first 36 holes.

“I thought I did a really good job both days of hitting a lot of really good quality golf shots,” he stated. “I kind of let both rounds get away from me a little bit in the middle.

For Conners, who led this tournament after the opening 18 a year ago, it was another day of struggles as he tried to find the consistency off the tees and into the greens that has been the best part of his game. He hit just five fairways on Friday and 12 greens in regulation.

“Another tough battle,” admitted Conners. “I was just a little bit off again with some shots. I made six from the fairway on the first hole.”

To that double, he added two more bogeys and a single birdie for a round of 73, ending the 36 holes at nine over.

“I definitely had high hopes this week,” Conners stated. “I like the golf course, I like the challenging conditions. It wasn’t meant to be. I couldn’t get things going in the right direction.”

He was tied for 98th in greens in regulation and tied for 53rd in driving accuracy, both numbers well below his season averages on the PGA Tour. He made just one birdie in two days of play.

If there was a bright spot for the Listowel, Ont., golfer, it was that his putting and shot game were solid. He has put in a lot of time working on improving both areas and that showed.

Conners remained optimistic that his game would rebound, sensing that it wouldn’t be long until he could put it all together.

“I’m going to sharpen up the game a little bit,” he said. “I feel like everything’s really close. I was really happy with my short game. I’m just going to work away and try to tidy things up and put some good rounds together in the next few events.”

Hughes’ play was similar to Conners, in that just a few small mistakes took their toll. The difficulty of a major resulted in small errors causing big blemishes in his score.

“Believe it or not, I played pretty well out there today,” he said of his two-over 72. “I had wedges in my hand on three holes – four, five and 13, and I played those holes in four over.”

As much as the odd swing during the round took its toll, Hughes was more upset about the enjoyment factor. His mindset was mostly negative as his round began to unravel leading to frustration, something he wants to try and avoid.

“I think I need to learn to enjoy golf when I’m playing poorly,” said Hughes, who played most of his round in the calmer afternoon conditions. “It was not a lot of fun out there, to be honest, it kind of sucks playing like crap. I think everyone can kind of relate to that.

“I need to hit the reset button mentally and find something, because I’m not swinging poorly but sometimes you need to be able to handle the adversity with the good.”

The three Canadians will now get set for the RBC Canadian Open at St. George’s Golf and Country Club. Hughes and Conners have never played the Stanley Thompson course in Toronto, while Hadwin made his PGA Tour debut there in 2010.

All three are also fighting for spots on the International Team for the Presidents Cup which will be held in September in Charlotte, N.C.