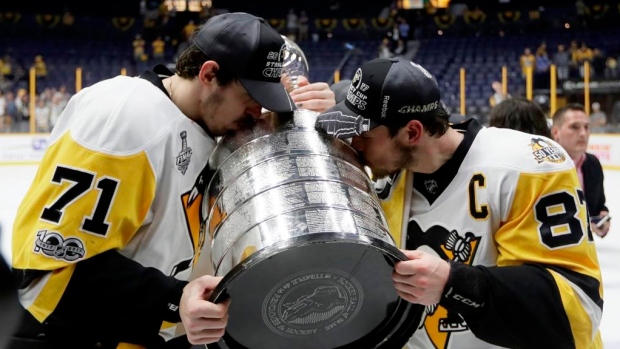 Malkin and Crosby , The Canadian Press

One of the interesting debates following last season was whether or not team Corsi% – the percentage of shots in a team’s favour over a given period of time – was still a meaningful driver of game outcome.

This discussion, in part, started during the regular season. I think the genesis of this was a very tight distribution of talent across the league. Outside of Washington (great) and Colorado (terrible), it was often hard to discern which teams were legitimately good or bad. Creating a hierarchy of the other 28 teams was a difficult exercise – far more difficult than in years past.

The argument that team Corsi% had lost its predictive nature seemed to strengthen as the Pittsburgh Penguins ran through the Eastern Conference en route to a second consecutive Stanley Cup. Pittsburgh was a strong team all year, but a 51.5 per cent Corsi% over 82 regular-season games ended up as one of the lowest marks for a championship team in the modern era. And the other conference finalists – Anaheim and Ottawa in particular – weren’t world beaters here either. So, is something up?

The way I see it, there are three relevant questions as a result of the above.

One: Was skater talent actually more evenly dispersed across the league last year?

Two: Is there a relationship between the tightening of talent and the predictive nature of Corsi%?

Three: Did the relationship between Corsi% and winning really diminish last season?

Let’s start with the first question. An easy way to model out the distribution of skater talent is to box plot every team’s Corsi% across the modern era. As talent becomes less evenly distributed, the boxes will grow in size. As talent becomes more evenly distributed, the boxes will shrink in size. (I have included whiskers here to show minimum and maximum by year here as well.) 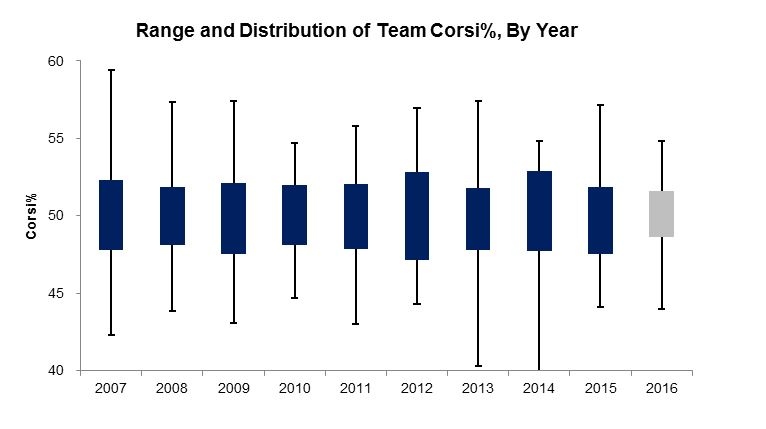 What you are seeing in 2016-17 – at least relative to prior years – is a much tighter distribution of talent. The teams in the muddied middle – basically your distribution of teams between the 25th and 75th percentile – were significantly closer in performance than they have been in years past, save for 2010-11. The “top team” by Corsi% was also measurably weaker than top teams in prior years. The same is true on the other end of the spectrum.

Now, Corsi% is just one measure of team talent. It excludes (among other things) shooting talent, goaltender talent and special teams quality. But over 82 games and thousands and thousands of minutes, you can reasonably infer from the above that teams were much more clustered last season than in years past.

That brings us to the other two questions: Does a tightening of talent have a direct impact on the predictive relationship between Corsi% and winning? And secondly, has Corsi% regressed as a key indicator of team talent? 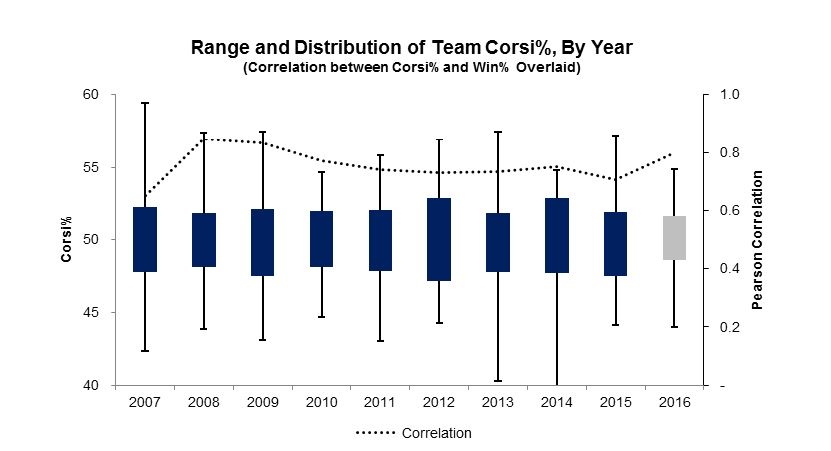 There may have been some truth to the argument that Corsi% wasn’t as tied to win percentage over the past few years as it had been during that 2008-10 stretch, but it doesn’t appear to be an accurate argument for last year either. This suggests that there was a particularly strong relationship between our shot measurement and win percentage over the course of the regular season. In fact, it’s the strongest number we have seen since the 2009-10 season. (One other thing this graph does is sort of debunk the idea that the relationship between the two measures changes as the league’s talent distribution changes – there seems to be little connection between talent distribution and relationship strength on a year-to-year basis.)

A better way of showing the 2016-17 number might simply be to plot out each team’s full-year Corsi% against their point-per-game accumulation. If anything, it reemphasizes what part of the quadrant you want to be on – and perhaps the rate at which we overreacted about the degradation of Corsi% as a meaningful measure: 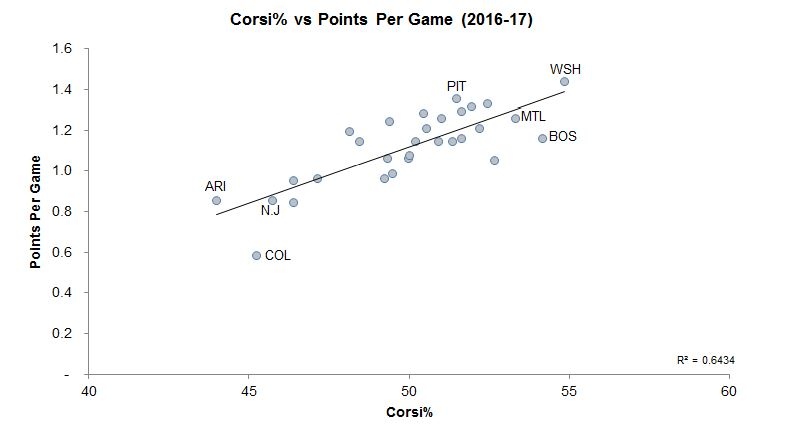 Thus, great ways to break the meaningfulness of Corsi% tend to be: (a) have an elite goaltender, like Carey Price in Montreal or Henrik Lundqvist in New York; or (b) have generational, superstar talents – like Sidney Crosby and Evgeni Malkin – down the middle of your lineup.

That said, these are generally exceptions or outliers. At a league-wide level, the relationship between winning the shot battle and winning games – especially over long periods of time – remains as real as ever.