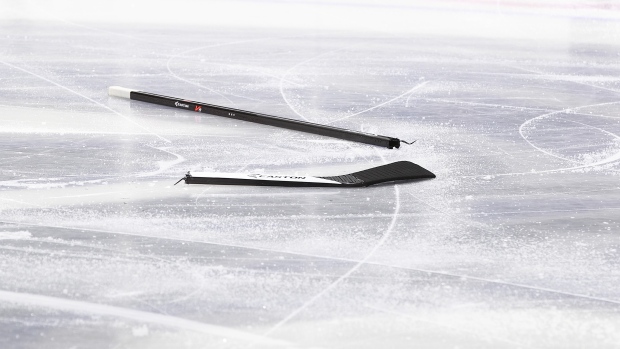 Months after losing an $800,000 lawsuit filed by a player who suffered a devastating eye injury, the Federal Hockey League (FHL) has lost another court decision.

The U.S. Court of Appeals for the Seventh Circuit this week denied the league's request for a new trial, which FHL officials said they deserved because their own lawyer allegedly misled them.

This spring, a U.S. federal court judge ordered the FHL to pay $800,000 to a former player named Kyler Moje who was injured during a game in 2012.

The league's commissioner, Dan Kirnan, told TSN at the time that he would appeal the lawsuit because John LoFaro, the lawyer hired by the FHL, never properly filed the league's legal response to the initial lawsuit.

Instead, LoFaro actually showed the league fake legal papers that made it appear as though the proper documents had been filed, Kirnan said.

"The league had insurance to cover this claim. I hired a local attorney that for some reason didn't perform and in fact showed me an answer that he never sent," Kirnan said in an email to TSN on Friday. "The league never found out until several months later. The insurance company will deal with this and the attorney. The league can't recover anything from the lawyer in question until we can prove damages."

Widely considered to be perhaps the lowest tier of professional hockey, the FHL was founded in 2009 and currently features six teams spread across the northern U.S., in cities such as Wayne, N.J., Danville, Ill., and Morrisville, Vt.

The league sells rough-and-tumble hockey styled after the movie "Slap Shot" and a few FHL players have actually advanced from the league to play in the East Coast Hockey League and the American Hockey League. While some FHL franchises have team budgets of as much as $400,000, according to media reports, games averaged about 1,000 fans this season. Broadcasting is limited to pay-per-view telecasts available over the Internet.

"LoFaro has never offered an explanation for the combination of inaction and deceit," the appeals court judges wrote in their newly released decision. "As far as we can tell the league has not filed a complaint with the legal-ethics panel in New York."

The judges also noted that the FHL did not consult its insurance company, "which any sensible business should have done," and it "failed to act prudently" after being alerted it was being sued.

The only reason, the judges wrote, the FHL has given for hiring LoFaro "is that he had provided satisfactory legal services to (Kirnan) in earlier years. But what kind of legal services? LoFaro's website describes his practice as 'personal injury, criminal law, DWI, speeding, and all traffic related matters. That list of specialties does not imply aptitude for the defence of a million-dollar tort suit in Chicago...

"Even if he were a wizard of tort defense, why keep the insurer in the dark? The league has never offered a reason."

Moje, a forward who played with the Danville Dashers, was injured during a Feb. 10, 2012, game against the Akwesasne Warriors. The Warriors franchise is no longer part of the FHL.

During the game, Michael Stacey, a player with the Warriors, "made an illegal maneuver by lifting his hockey stick and thrusting the blade end forcefully under Kyler Moje's helmet," say legal documents obtained by TSN. "Stacey's blade ultimately penetrated (Moje's) eye, blinding him."

Moje's lawyer Dean Caras wrote in legal briefs that the FHL had been informed on several occasions that the Warriors "had consistently engaged in illegal and violent game play which posed a threat to opponents."

Moje, the documents say, suffered "severe and disabling injuries…. and may in the future suffer great pain, anguish and physical impairment."

Moje has already spent "a large sum" for medical, hospital and doctor care and attention."

Stacey, 32, a police officer on a First Nations reservation in Quebec, denied he attacked Moje.

"I am not going to be out there gouging people's eyes," Stacey told TSN in April. "My job is to protect people. I went to lift his stick in the corner and missed. I high-sticked him. No question. The puck left the zone and the ref left. No one saw it happen. I stayed with the kid and called for their trainer and after the game I went over and talked to their coach.

"Yes, I fight. But if you look at my career in the QMJHL and junior, I was never suspended for high-sticking. All my penalties were five minutes for fighting."

Caras filed the lawsuit against the FHL on Jan. 23, 2014. Two weeks later, the court record shows, the FHL hired LoFaro. In early March 2014, the league was advised that no defence had been filed in the case. When Kirnan asked LoFaro to clarify the situation, LoFaro gave Kirnan "what purported to be a copy of that answer to plaintiff's complaint," a legal brief says.

On Oct. 9, Kirnan advised the FHL's insurance company National Casualty Co. that the court had issued a summary judgment for $800,000 against the FHL. On Dec. 11, 2014, the FHL asked an appeals court to vacate the judgment.

Kirnan said in April that the league doesn't have the money to pay the judgment.

"The league is not the National Football League," Kirnan said at the time.

He said the FHL could shutter, and reform under a different name to avoid paying the $800,000 judgment. "We are a limited liability corporation," Kirnan said. "It's not like we have any real estate."

"Players with half-shields, it's one of the problems," Kirnan said.

"Someone can get a stick under it by mistake."