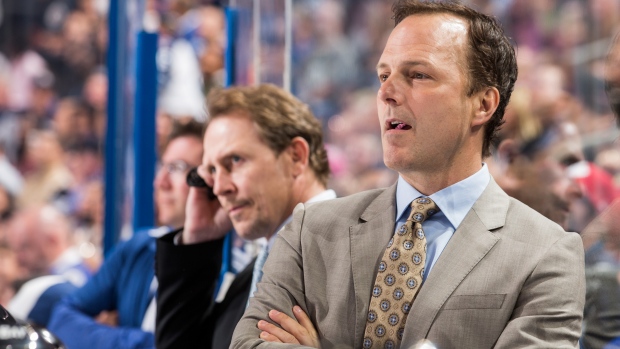 My thumb is up to Tampa Bay Lightning coach Jon Cooper, for putting the brakes on rookie Jonathan Drouin. A fractured thumb has kept Drouin on the pre-season sidelines, but he vows to play in the Bolts' regular season opener. Cooper politely reminded one and all that he's the one who makes that decision.

Where Drouin is concerned, Cooper's quotes should always be the ones considered. Fans of the Lightning wanted Drouin to have a spot on Steven Stamkos' line the day he was drafted, and they think that is bound to happen now, one year later, and that Drouin automatically becomes the leading candidate for the Calder Trophy.

Not so fast. All in good time. Let's wait and see. Words to be heeded, no matter who's saying them, but especially if Cooper is saying them.

My thumb is down to the Bobby Ryan contract, and the way such things are analyzed these days, it has to be. Never mind that the Ottawa Senators might have had no choice but to reward Ryan with a seven year, $50 million deal, in any pertinent comparison, Ryan is getting more money than he deserves.

He does not deserve to make more money than any member of the Stanley Cup champion Los Angeles Kings, and for that matter, he doesn't deserve to be the highest-paid player on his own team. Unless, of course, he scores 40 goals, and to do that he'll need plenty of help from linemates Kyle Turris and Clarke McArthur, whose two salaries combined don't add up to Ryan's.

The seven-year term is a potential problem all its own. For all of the players the Senators have been unable to satisfy or to keep, they can only hope that Ryan doesn't represent an even bigger problem - a player with whom they are stuck with.