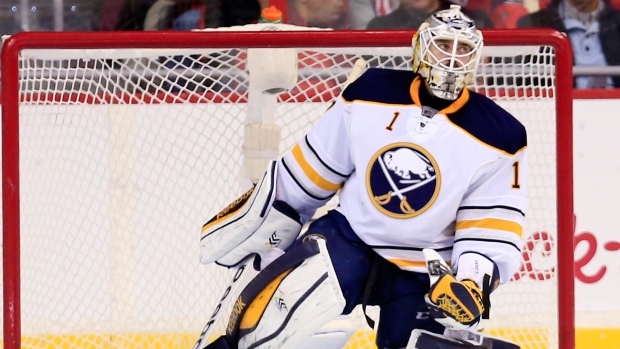 My thumb is up to "Saturday's Star"—Buffalo Sabres goalie Jhonas Enroth. He stopped 43 of 44 Washington shots—eight of them by Alex Ovechkin—in the Sabres' 2-1 victory, their third in a row, which is a story all its own.

Someone will surely suggest it's not a good idea for the Sabres to flirt with the idea of leaving the NHL basement, but it won't be me.

The name of the game is to win, and who would quarrel with some special praise for a victory that came against the odds, brought by the monumental snowstorm in Western New York?

The win over Washington was anything but pretty. The Sabres won't have many that can be described that way, but for all that is wrong with the NHL's last-place team, the win at Washington marked "November 22" stands out and is worth more than two points.

Thumbs up to the Toronto Raptors, and before you say that doesn't belong in a hockey blog, let me tell you why it does.

These Raptors have been embraced by their Toronto followers like never before. Obviously, their 11-2 record has a lot to do with that, but more than that, the Raptors are easy to like because of the way they play.

They entertain, they hustle, they have fun and they like each other, all of which makes it very easy to like them.

For many years, I have observed that it's not so easy to like the Maple Leafs. Again, their level of success has contributed to that, but there's something about the Leafs--maybe it's the burden of the franchise's nearly 50-year Stanley Cup drought that weighs on them--but they go about their business differently than the Raptors.

While the relationship between the Leafs and their fans is in the news, the hockey players should take note of the fact that Raptors fans, though they may be a different breed for a different sport, live in the same city as the supposed hockey fanatics.

It would be okay to label Toronto as a city of laid-back sports fans if the Raptors supporters didn't exist, but they do and they prove that Toronto will cheer loudly for a team it likes.

It likes the Leafs better than it did three games ago. The relationship still needs work, however.