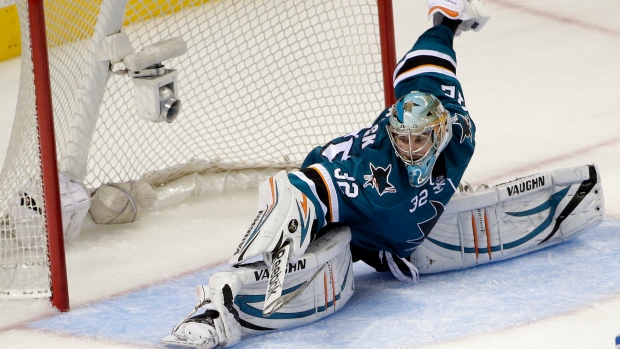 Thumbs up to the fullest night of action the NHL can provide, and with all 30 teams in action on Saturday, I will now undertake the difficult task of selecting Three Stars. I could pick Sidney Crosby, who scored a goal, and Ryan Getzlaf, who scored a last-minute, winning goal,  and Alex Ovechkin, who scored two goals. But where’s the fun in that? So here are my Three Stars that may not be recognized anywhere else.

First Star—San Jose Sharks’ goalie Alex Stalock. He had a 30-save shutout against the Winnipeg Jets, and that’s good enough on its own, but Stalock is selected as a way of recognizing his team’s, shall we say, “perfect” start. Two games, two wins, two shutouts (Antti Niemi had the first one). Can’t beat that. Who needs a captain? (And on that subject, Montreal is 3-0).

Second Star—New York Islanders’ forward Brock Nelson. With that name, how many times have his teammates said they’d like him on their side in a war? The Warroad, Minnesota native led a 4-3 victory over Carolina with a goal and an assist and he has six points in two games. So does Sidney Crosby. No one else does.

Third Star(s)—Coaches Willie Desjardins (Vancouver) and Mike Johnston (Pittsburgh). Not a  bad way to start for two rookie head coaches. Both are 2-0 and the hot spots they inherited are quickly more comfortable than they might have imagined.

My thumb is down to Phil Kessel, and I know—that means I have to stand in line. But really, shouldn’t Kessel think for half a second and realize that his best reaction to his part in Toronto’s season-opening loss against Montreal was not “you guys need to relax”? Nobody’s relaxing, Phil, except, perhaps, you in the Leafs’ Saturday night clunker against Pittsburgh. It doesn’t match Kessel’s chart-topping tweet from April that declared “Night fishing with friends—doesn’t get much better”. The sting of missing the playoffs had worn off, apparently. What Toronto fans need to hear from Kessel is that losses bother him. Even if they don’t.