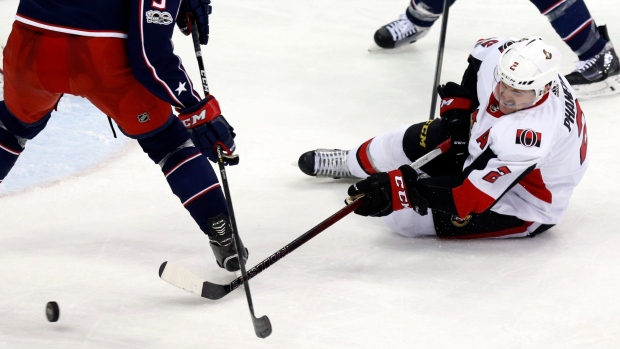 By now, everyone is familiar with Guy Boucher’s first tenure as a head coach in the National Hockey League.

After taking the Tampa Bay Lightning to Game 7 of the 2010-11 Eastern Conference final in his first season with the club, Boucher struggled in his sophomore season behind the bench. And when the Lightning stumbled out of the gate during the lockout-shortened 2012-13 campaign, Boucher was relieved from his duties by general manager Steve Yzerman.

Now there is a genuine concern amongst the fan base in Ottawa that the Senators are going down the same path with Boucher in his second stint as an NHL head coach. The script is so eerily similar it also includes a one-goal loss in Game 7 of the Eastern Conference final against the eventual Stanley Cup champion.

In the last few days, the phone lines at TSN 1200 have been lit up with callers demanding that the coach be fired because they’ve seen this act before.

So the question needs to be asked: Are the Senators becoming the Lightning 2.0 under Guy Boucher?

The answer is yes – but maybe not for the reasons you might think.

The theory held by a lot of fans is that Boucher’s system became dull and boring in Tampa and the Lightning players – unhappy to have their creativity stifled – essentially tuned out the coach.

The casual hockey fan automatically thinks of Chris Pronger and the Philadelphia Flyers refusing to break the puck out of their own zone in a game against the Lightning in Boucher’s second season. For many, the moment serves as the perfect microcosm for the Boucher tenure in Tampa Bay.

But a closer look reveals that Steven Stamkos had the best offensive season of his career under Boucher in 2011-12, hitting the 60-goal plateau. The Lightning had a top-10 offence in the league that season, with a lineup that featured five 20-goal scorers.

So if scoring wasn’t the problem for the Lightning in Boucher’s second season, what ended up torpedoing their season?

The answer – as is often the case in the NHL – was goaltending.

In his second season in the NHL, Boucher’s goalies provided him with a putrid .893 save percentage. The duties were almost evenly split between Dwyane Roloson (.886 save percentage) and Mathieu Garon (.901 save percentage).  Despite playing the alleged air-tight defensive system that Boucher preached, the Lightning finished dead last in the NHL in goals against during the 2011-12 campaign.

As you look at Ottawa’s goaltending so far this season, Boucher must be having flashbacks to Tampa, as his netminders have only provided him with a .899 save percentage. Craig Anderson has had a rough start to the season, playing well below his career average. Teams that have save percentages hovering around the .900-mark are usually in line for a lottery pick at the end of the season.

But since general manager Pierre Dorion has pushed all of his chips into the middle of the table in the past 18 months with the acquisitions of players like Matt Duchene, Derick Brassard and Alex Burrows, there can’t be any talk of a lottery pick in this market. Especially when you consider the Avalanche now own Ottawa’s 2018 first-round pick after the Duchene trade – though Dorion wisely protected it in case it becomes a top-10 selection.

The goaltending in Ottawa should receive a significant portion of the blame for the slow start to the season and for that reason, Boucher should avoid some of the criticism being lobbed his way. Ask Paul Maurice how much better he looks as a coach, now that Connor Hellebuyck is giving the Winnipeg Jets a .926 save percentage to start the season.

Boucher also can’t control the health of Erik Karlsson, who just simply hasn’t looked as explosive as he did before his off-season surgery. This isn’t to say Karlsson can’t or won’t return to that form, but more than a quarter way into this campaign, it’s safe to say that Ottawa’s most dynamic player isn’t quite playing up to his potential.

He's gone from a potential Hart Trophy candidate to just a really good defenceman. And when you make an honest assessment of the Senators blueline in the post-Methot era, they simply need Karlsson to be out-of-this-world on a consistent basis.

So when your best player is limited by his recovery from an injury and your goaltending is below average, it makes it pretty difficult to be a successful head coach at this level.

Of course, there are some things within Boucher’s control that he should take ownership for – not the least of which is the struggling power play. Boucher had a reputation for being a special teams guru when he was hired by Dorion in the spring of 2016, but we’ve yet to see Ottawa’s power play produce any sustained productivity in more than 100 regular- season games. On too many occasions – like on Wednesday night in Montreal – it ends up draining all the momentum and life out of the team.

In 105 games as head coach, the Senators power play is operating at a paltry 16.7 per cent – the 27th-ranked unit in the league over that time frame. When you have talent like Karlsson, Brassard, Duchene, Bobby Ryan, Mike Hoffman and Mark Stone to play with, at some point responsibility for the bad power play should fall on the coach’s shoulders.

This isn’t an issue with inadequate talent; there is a systemic problem with the way this group is setting up and executing with the man-advantage. For the record, the Lightning’s power play in Boucher’s second season with the team was ranked 25th in the league – as special teams were another contributing factor to Tampa’s struggles.

Ottawa’s stagnant power play makes the decision to not dress Thomas Chabot even more perplexing. Albeit in a very limited sample size, Chabot has looked comfortable running the power play from the point. Considering the Senators unit looks stale and predictable these days, an added wild-card element like Chabot certainly couldn’t hurt.

Boucher also deserves scrutiny for his reluctance to play the young players a little bit more. His penchant for favouring older players hasn’t necessarily worked out in the first two months of this season, particularly on the back end.

Player deployment and the power play are two things that Boucher can control and for that, he should be held fully accountable for Ottawa’s slow start.

But there are a myriad of factors beyond his control – with goaltending and Karlsson’s status leading the way – that mitigate the amount of blame that should be laid at Boucher’s feet. If the Senators were getting better goaltending and Karlsson is playing at close to 100 per cent, I’m not even sure there is a discussion to be had about Boucher’s abilities behind the bench.

Besides, the Senators have made so many coaching changes over the past decade, they simply can’t fire another head coach and expect all of their issues to disappear. In the Senators world, the definition of insanity should be defined as firing your head coach over and over again and expecting different results.

By now, we should know that Boucher deserves some of the blame for the Senators recent woes – but certainly not the lion’s share of it.