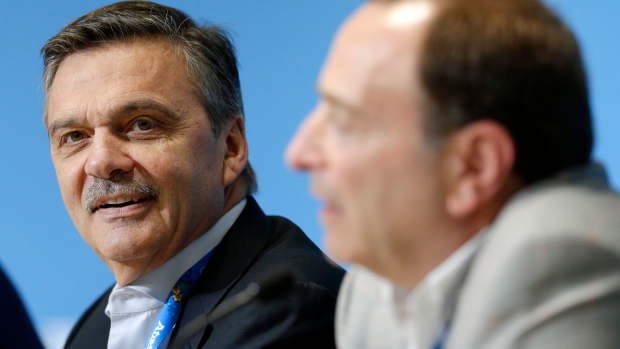 The head of the International Ice Hockey Federation remains hopeful for an NHL Olympic resolution but again made it clear that skipping the tournament in South Korea in 2018, then coming back to play in Beijing in 2022, is not the way to go.

"We have previously stated that the NHL can't just pick and choose which Olympics to participate in," Rene Fasel said in a statement to ESPN.com from the IIHF on Monday. "Our discussions are focused on going to Pyeongchang, and any discussion about Beijing can wait until this has been settled.

"Building ice hockey's profile in Asia is one of the top mandates of my current presidential term. There is a rising interest in the sport within Korea, and we would miss a huge opportunity to grow the game if we didn't have a best-on-best showcase in this country."

The NHL is believed to have keen interest in taking part in the 2022 Winter Games in Beijing, viewing it as a great investment opportunity for the league and sport. Later this week the NHL and NHL Players' Association will announce a pair of NHL preseason games between Los Angeles and Vancouver for next fall in China.

Fasel, however, is warning against skipping South Korea. He said last week he needed a resolution by late April.

"We are still positive for a good solution that will allow the NHL players to compete in the Olympic Games and which is fair to all the stakeholders involved,'' Fasel said.

"The NHL's presence at the Winter Games has been a huge benefit for the sport's visibility worldwide and has provided a memorable experience for the players that have competed from Nagano to Sochi, so we will continue to work hard to ensure that we secure their participation in Pyeongchang and beyond."

NHL commissioner Gary Bettman has said repeatedly in recent weeks not to expect the league's participation in South Korea unless something changes. Bettman made it clear at a breakfast with Chicago business leaders last week that league owners don't want to stop their season for three weeks again and put their stars at risk of injury without what they consider a tangible return.

"We remain hopeful that the negotiations between the IIHF and the NHL will prove successful," an IOC spokesperson told Reuters last week. "The fans want to see the best hockey players taking part in the Olympic Winter Games Pyeongchang 2018."