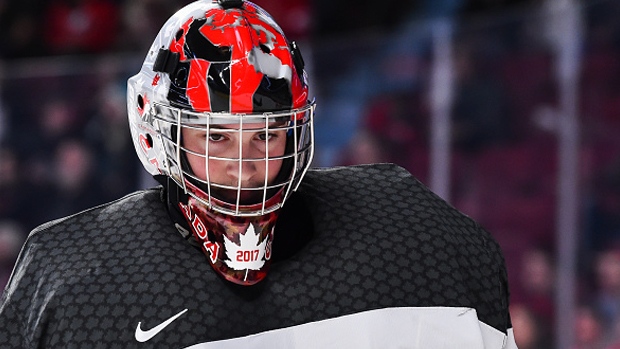 MONTRÉAL — Canada’s hopes for a shot at gold will rest on the shoulders of Connor Ingram.

This will be Ingram’s third consecutive start at the world junior championship, including Monday’s quarterfinal win over the Czech Republic and a New Year’s Eve loss to the United States.

Ingram, 19, was a third-round pick of the Tampa Bay Lightning last June. He has allowed six goals against on 45 shots in the 2017 World Junior Championship.

“We’re comfortable with him,” Ducharme said Wednesday. “What we like is how he comes up big in big moments: big saves against the U.S. in the second and third, starting the third period against the Czechs.”

Ingram’s start against Sweden, the favourite who enters undefeated in the tournament, comes after Ducharme offered a tepid assessment of his play against the Czechs. Ingram allowed three goals on the first 16 shots he faced, with Ducharme’s comments seemingly opening the door for Carter Hart’s return to the crease.

But Hart, the reigning Canadian Hockey League goaltender of the year, had not seen game action in six consecutive days.

“He had 19 shots,” Ducharme clarified Wednesday. “It’s not an easy situation for the goalies. He had two goals where one was off the referee and the other one was kind of a rebound with an open net. It’s not easy when you don’t receive a lot of shots for a goalie.”

Canada’s goaltending has once again been a focal point of the world juniors. They have the ninth-ranked save percentage (.874) among the 10 teams in the tournament, ahead of only Latvia, which was relegated on Tuesday.