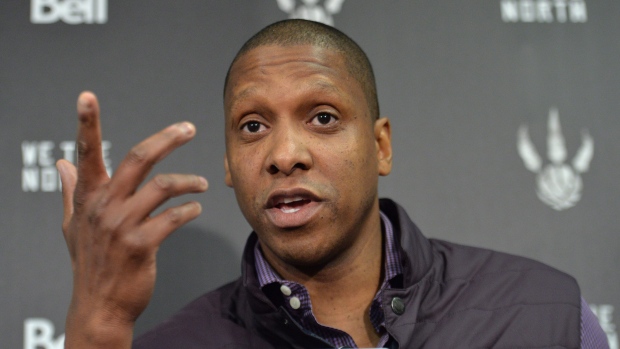 ”We are going to hold everybody accountable because we need to. We need, after that performance, we need a culture reset here. We need to figure it out. Yes, there’s been some success, but at the end of the day we are trying to win a championship here. To me making the playoffs is nothing. That was back in the day. Now we have to figure out how we can win in the playoffs. That’s the goal.”

It was the morning of May 9, barely 41 hours after the Toronto Raptors were knocked out of the playoffs, again at the hands of LeBron James and the Cleveland Cavaliers. The year prior it was a badge of honour – stealing two games from the eventual NBA champs in the conference finals. This time it was embarrassing.

Reluctantly, team president Masai Ujiri delivered his annual end-of-season address. The wounds were still fresh following their second-round sweep. The off-season had just begun and he didn’t know exactly what he was going to do, but he used the opportunity to send a well-thought-out message to the organization and those within it: things needed to change.

Nobody was quite sure what a “culture reset” meant. Even now, nearly a full year later, it’s open to interpretation.

At the time, many believed it was the beginning of the end for this Raptors team as we knew it, that maybe Dwane Casey’s job was in jeopardy or the long-time core of Kyle Lowry and DeMar DeRozan would be split up. None of that turned out to be the case.

Instead, the term has become synonymous with the team’s on-court makeover this season, the stylistic changes that have turned their once stagnant and predictable offence into an inclusive, free-flowing system. Their assists are up, they’re shooting more threes and they’re playing at a quicker pace, as planned. However, there’s more to the culture reset than meets the eye.

When Ujiri was finally able to take some time and evaluate what went wrong and how to best move forward, he looked beyond personnel. He spent most of May reviewing the team’s day-to-day procedures – how they practised, trained, travelled and interacted with one another – and asked himself: Can we do this better?

“The culture change is about the whole organization,” Casey, who worked closely with Ujiri to reinvent the team’s philosophy over the summer, said last week. “It's not about offense and defense. Believe me, when he mentioned that, it was about all of us. Everything we do. From scouting, training, how we go about our day in the front office, it's included in that.”

The two words that came up most often when interviewing players and team staff members for this story were accountability and communication – a couple of guiding principles in many of the changes they’ve made behind the scenes.

This season has seen the Raptors hold fewer formal practices than ever before under Casey. This is a trend that started a few years back, as the team became a winner and began prioritizing rest – especially for its veteran core. Gone are the long, physically demanding sessions that Casey would put them through early in his tenure.

The biggest difference this year is that instead of bringing guys in for partial or light practices they’ve opted to give them more days off, putting the onus on players and the assistant coaches they train with to get individual work done. In the interest of better preserving players, physically and mentally throughout the course of a long season and into the playoffs, they believe that managing their workloads on off days is every bit as important as reducing the minutes they play.

If it seems like they have loosened the reigns, think again. The longest-tenured players say the Raptors have never been stricter in enforcing team rules, all of which were outlined in a meeting at the start of training camp.

Casey requires all of his players to have their shirts tucked in during practice. He asks that players clean up after themselves, even though they have support staff on site. If a player leaves his sweaty jersey on the court after practice or on the bench after shootaround he’s forced to pay a small fine. If a player is late for a practice, film session or meeting they are fined.

“If a guy’s not disciplined off the floor he’s not going to be disciplined on the floor,” Casey told TSN. “So all those things are really important. We’re sticklers for being on time. I don’t want to take guys’ money but we will for guys being late. We go by the minute. We’ve done it all year if guys are a couple minutes late for a meeting or whatever.”

“I think the biggest thing that came out of it was holding everybody accountable, holding everybody to the same standard,” said Fred VanVleet. “Obviously we’re in a league of stars and superstars and you’ve got to massage guys’ egos, but I think this year more so than last year we’ve held everybody to the same standard and guys are being held accountable, from Kyle and DeMar all the way down to me and Lucas [Nogueira], or whoever, Bruno [Caboclo] when he was here.”

“We had a lot of things in place [already] but as a team sometimes things slip,” Casey added. “It was more tightening things up as much as anything else. Not making it like a prison or anything like that. You want it to be fun for guys to come to work, but at the same time there’s a discipline factor to it. Our guys have been great. A couple guys [have been] late but we haven’t had anything major as far as discipline is concerned.”

The organization has put a greater emphasis on weight training and conditioning. Early in the off-season they assigned players specific goals and monitored their progress throughout the summer and into camp.

One of their focuses is body fat. They challenged each player to get and stay under 10 per cent body fat, a target that all but one had reached by the end of preseason.

The team has been tracking it regularly all year. Alex McKechnie (director of sports science), Scott McCullough (head athletic trainer), Jon Lee (strength and conditioning coach) and the rest of the Raptors training staff have individual programs set up with each player. Guys that fail to reach their goal have to put in extra work on the underwater treadmill and the stationary bike.

Things have also changed on the road. It used to be that players were on different schedules after practice or morning shootaround. Some would have media obligations, some would stick around to get extra work in, while others – usually the veteran guys – would finish up and take a cab or Uber back to the hotel.

That is no longer permitted. Media availability has been moved before shootaround. Afterwards, everybody has to wait around until the last guy is done before they all leave together on the team bus.

“Everything’s just kinda more team built and everything’s more team-oriented,” Lowry said. “It’s not like it was a bad thing before but we wanna be on the same page. We wanna be together, we make sure that we’re all communicating. We’re all on the same page and it’s not one person’s doing this, one person’s doing that. Everybody’s doing everything together.”

To a man, every player says the team is closer this season. Winning will do that, but they insist there’s more to it. The young guys – who make up two-thirds of the roster – spent the bulk of the summer working out together and bonding in Los Angeles, Vegas and Toronto. Meanwhile, most of the vets had been teammates before, some for years. From the start of camp the team made a conscious effort to bridge those two factions, promoting unity and togetherness.

VanVleet notes that they’ve gone out for more group dinners this year than last, some team organized but many arranged by the players themselves. Lowry says that, more than ever before, he feels open communication is encouraged throughout the organization and that everybody has a voice.

To this point, their season has been a resounding success. They’ll go into the playoffs as the top seed in their conference for the first time in franchise history. Casey did what few thought he would be able to do by revamping their style of play with virtually the same personnel. He might be rewarded with the NBA’s Coach of the Year award for it. Their stars, DeRozan and Lowry, not only bought into the so-called culture reset, they’ve fully embraced it.

They know it doesn’t mean much if their success doesn’t carry over into the playoffs. That’s what these changes were implemented for, after all.

If they do breakthrough in the postseason we’ll continue to credit their stunning on-court transformation, and justifiably so. If nothing else, those changes are quantifiable. They went from dead last in the league in assists to sixth. They went from 22nd in three-point attempts to third. We can see the difference those tweaks have made.

It’s impossible to measure how much the Raptors’ behind-the-scenes culture reset has contributed to their success. Individually, most of their off-court changes are small and seemingly insignificant, but the internal thinking is that they all add up to something bigger, something that will help put them over the top.

“They’re small details but they make a difference,” Lowry said. “If you look at our team there’s no outcast. Everyone’s together. Everyone loves being around each other. Everyone has a relationship with each individual, so that’s big.”

“I think that there’s just a little bit more of a togetherness,” echoed VanVleet. “Obviously Masai’s [culture reset], or whatever you want to call it, paved the way.”