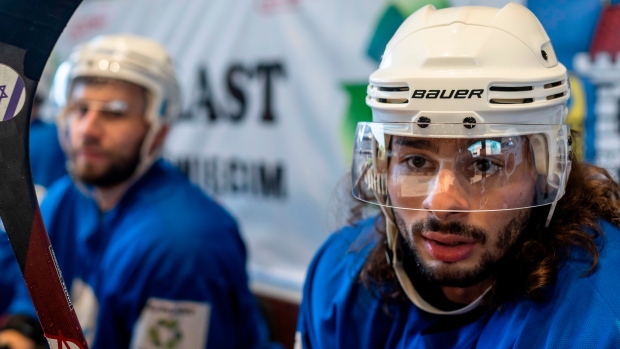 Israeli-Canadian hockey player Eliezer Sherbatov, a left wing for HC Mariupol of the Ukrainian Hockey League, was at a hotel on the road in Druzhkivka last Thursday when he and his teammates heard a bomb go off outside their hotel.

Sherbatov, who played two seasons in the QMJHL in 2009-10 and 2010-11 and was in his first season with the eastern Ukraine-based team, was quickly summoned with his teammates to a meeting, where the head coach told his players the war had begun.

Sherbatov, 30, then travelled across Ukraine over the next five days, eventually crossing the border to Poland before getting on a flight to Toronto.

He spoke with TSN on Tuesday about his journey through war-torn Ukraine back home to Montreal.

The following transcript has been edited for length and clarity.

TSN: How are you feeling right now?

Sherbatov: “I’m overwhelmed. I’m exhausted. I just came back a couple of hours ago from this long trip. I’m very exhausted. I haven’t eaten or slept in the past days. So, just to see your family and familiar faces, it’s starting to get better.”

TSN: What has the past two weeks been like for you and what was your journey from Ukraine, crossing borders, and back home to Canada?

Sherbatov: “To be honest, it’s a long journey. My team is situated in Mariupol which, as of today, has been taken by the Russians. But we had a game in Kramatorsk, which is also north of Mariupol, which is Donetsk Oblast, which has military bases and have the Russian tanks. There’s war waging there, where it started. We had a game there. We’re driving by bus, five hours north of Mariupol and we stopped at our hotel in Druzhkivka. I’m ready to play my hockey game. I’m ready to win, going to bed at the hotel. For me, I have a hockey game the next day. Everybody’s ready, playoffs are within our grasp, so everyone is focused.

“At 5 a.m., I’m sleeping and hear ‘boom!’ You never hear that strong of a sound. It was so loud that I woke up. I wake up and I see through the window, a light going right through the window and it goes like this [gestures with hands]. It wake me up. I’m looking around and check on my teammates that are with me in the room. They woke up and then you hear another ‘boom!’ And it starts shaking, everything is shaking. So, a couple of metres away [from us], the war started, and I cannot believe what is happening. I’m not sleeping. In the morning, we receive a text: Meeting at breakfast. Coach comes at breakfast and says, ‘Guys - the war has started. It’s unfortunate, but I would suggest you to stay put as a team. But if you choose to leave, it’s your decision.’

“How I feel right now, how I felt that time, everything from my body wanted to come out because war is starting. You have the Russian tanks from the east side, and you have the Belarus from the north...Where do you need to go? What are you going to do? You don’t know, and you start to think. People say we need to go to bomb shelters and everything. I cannot believe what is happening. It was a long journey and that’s how it started.”

TSN: Was there ever a point where you feared for your own safety or your own life?

“You cannot sleep. It’s very hard to explain how I felt. It’s people hiding, putting mattresses, I’m trying to understand where I am and which situation I’m in. Everyone says we need to go to a bomb shelter. What happened is that we’re right in front of the train station in Druzhkivka, our hotel. And this was the only path to leave Donetsk Oblast. Two days later, me and one of the guys I played against, we went [to the train station]. We need to leave. We’re the only European Canadians.

“We got a ticket to Lviv, to the border of Ukraine, but it’s right all the way west in Ukraine. You need to go through three cities where war is waging. By the time I’m waiting for my ticket, I’m calling the Canadian embassy. I’m asking, ‘Please [help] me. There’s war. People, civilians, are dying. I cannot go home to Mariupol down south because the Russians are coming, and it’s already bombed. I left absolutely everything. I had one backpack. I had my toothbrush. That’s it. Just a backpack that you have for one game. I call the Canadian embassy, no answer. I write them an email, they write back and automatic reply, ‘We will be with you shortly.’ A day later, they sent me a copy/paste email that they sent to everyone, ‘Go to a bomb shelter.’

“Believe me – if I would have listened and gone to a bomb shelter, I would, right now, be at a bomb shelter and on top of me would be Russian and Ukrainian tanks killing each other. So, I had to make a decision. I’m waiting for my train for two days. I’m not eating. I’m not sleeping because it’s impossible. You fear for your life every single time, every single second.

“Our train that goes through Lviv is late because we received a call that the trains are getting shot as of now. So, the third guy that was supposed to come with us, he tells me, ‘I’m not going because I don’t want to die.’ It’s a 50-50 per cent chance [of survival]. That’s what they said. That’s a 50-50 chance, [if] you go on the train, you [might] die. Tell me, what would you do? What decision would you take?

“You stay, you go to a bomb shelter, and you hope that a person doesn’t put a grenade inside the bomb shelter or you don’t get [caved in] and you just die under the bomb shelter. Or you take the train and have a 50-50 chance at survival. What decision you can take? I don’t know. I didn’t know at the time, so I called my dad. He’s the person that really calmed me down and I’m very grateful. So again, [I am] very disappointed in the Canadian government that aren’t helping their Canadian citizens to get out.

“Right away, I received a call from the Israeli embassy with the Israeli volunteers that are waiting for us in Lviv. So, I made the decision that, because the train came late, my dad and I made the decision that if through God’s will the train comes, it’s because he wants you to get inside that train and go to Lviv. Why the trains are getting shot is because they are going through Kramatorsk, where there is war. The train goes through Kharkiv, where civilians are dying, and it goes through Kiev, where [the war] is in the centre of the city. We’re going through and imagine how I felt in that 24 hours. I called this train the Train Of Death because every single second, you think you’re going to get shot because it’s army everywhere, you just don’t know which [army].

“So, by God’s will, we got to Lviv and me and my friend who’s Latvian, we went to the Latvian consulate. Thank you to the consulate. We then went to the Israeli consulate and met the Israeli volunteers, amazing people, amazing organization. After that, they got us on a bus with kids and elderly people. They made me responsible for that bus because nobody at the consulate was coming with us because they had to wait for others. They made me responsible for those 17 people and it was the hardest thing I’ve ever done in my life, to be responsible for 17 people when it’s a matter of life and death.

“Let me tell you, when we got to Warsaw, Poland, walking for 10 hours. The beeping outside for hours and hours and getting stopped by people with guns and explaining that we are with the Israeli embassy. I had to be talking in Russian because then in Lviv, you can’t speak Russian. I had to explain [to the 17 people] that we were all sticking together. When we got to Warsaw, Poland, it was special. It was very special.”

TSN: What was the feeling when you arrived in Canada, and you got to be back with your family?

Sherbatov: “I spoke once to my wife at the beginning on the first day. I looked at her and I started to cry. You cannot tell her ‘I’m about to die.’ You cannot tell that to your wife. You cannot. You have to explain to her that everything is going to be okay. So, that was the only time I spoke to her, by FaceTime, before arriving in Poland. When I got home to my family, it’s emotions. It’s crying. I met my son for the first time, and I thought I would never see them. I thought I would never see my family. They were sleeping and my daughter was sleeping, and I just went to beside her. I hugged her and I just stayed there, just crying and stayed there.”

TSN: Are you in touch with some of your teammates from Mariupol? Do you know how they’re doing right now?

Sherbatov: “Yeah, as of now Mariupol has been taken by Russians. It’s war in front of their houses. They’re shooting buildings in Kharkiv, in Kiev, in Mariupol. I’ve been talking with everyone. It’s war.”

TSN: You’re back in Canada now. What are your next steps, and have you thought about what your future looks like here?

Sherbatov: “I don’t know, just to be with my family. I lost everything there, so just be here with my family. I mean, when you think you’re not going to come back, you’re never going to see your parents, the only thing you want to do now is be with your family the rest of your life.”