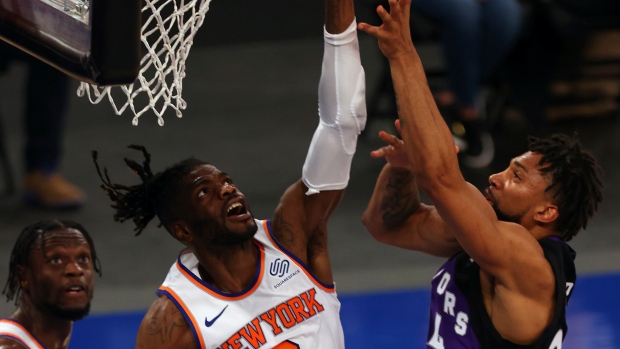 TORONTO – If you’ve followed the Toronto Raptors for long enough you’ve undoubtedly become accustomed to riding the wave as a sports fan. You’ve experienced some of the highest highs and many of the lowest lows. In its two and half decade history, the franchise has produced plenty of both.

Khem Birch is familiar with that emotional ebb and flow.

Growing up in Montreal, Quebec, Birch would watch Raptors games on television with his father, Dervincent. As Canada’s lone NBA club – once the Grizzles left Vancouver for Memphis in 2001 – Toronto became their adopted team, for better or for worse. They even made the five-hour drive west to see them play live at what was then called the Air Canada Centre.

Birch was seven-years-old when Vince Carter’s star was rising to new heights at the 2000 dunk contest. He remembers his cousin had a poster that featured one of Carter’s iconic slams from the event on her wall.

He also remembers the dismal seasons that followed Carter’s departure. Those were dark times in franchise lore, to be sure, but like any true fan would, Birch stuck by those struggling Raptors teams, even if it weren’t always the easiest to watch.

“We always supported them just because they’re the home team,” said Birch, now 28 and in his fourth NBA season. “My dad used to always complain about the team, yell at the TV and stuff. And now I’m on the team, so this is just a surreal moment.”

A lifetime of riding the Raptors rollercoaster might just be the best preparation for joining the team in the middle of this chaotic 2020-21 season.

With the Orlando Magic going younger in the frontcourt, the decision was made to release Birch ahead of last Friday’s waivers deadline, allowing him to choose his next team. That choice was an easy one.

The fit with Toronto made too much sense. Beyond his passport and fondness for the franchise, Birch also played for and endeared himself to Raptors head coach Nick Nurse with the Canadian national team at the 2019 FIBA World Cup in China. The fact that the Raps were in desperate need of a big man and could offer plenty of playing time at the centre position was the cherry on top. Once he cleared waivers early Saturday evening, they made it official.

“Man, I think it’s an iconic moment,” said Birch, shortly before debuting for his new club in Sunday’s 102-96 loss to New York. “Playing for this team means a lot to me… This is a surreal moment, I can’t even put it into words. I’m just so happy to be here right now.”

“I think eventually it was going to happen… It was inevitable.”

On a team full of unlikely success stories, Birch should fit right in. Like Boucher and Fred VanVleet, he went unselected in the draft. Like Nurse, he spent time in the D-League and went overseas – playing in Turkey and Greece – before ultimately getting his NBA opportunity.

Birch isn’t going to put up big numbers – he was averaging career-highs of 5.3 points and 5.1 rebounds in 48 games with Orlando this season – but he knows his role and he excels in it. At six-foot-nine, he’s undersized for a centre but he makes up for it with his strength, physicality and toughness. He’s a solid rebounder and a very good positional and team defender.

Generally, you’re not going to find a saviour on the buyout market or on waivers, and it’s not fair to expect Birch to step in and solve the Raptors’ season-long issue in the middle, but he can help address a few glaring needs. They’re dead last in the league on the boards and have fallen to 17th in defensive efficiency after ranking second in that category last year.

They’re three-quarters of the way through the campaign and they still haven’t come close to replicating the production of Serge Ibaka and Marc Gasol – their lauded centre tandem that left in free agency last fall. To say Aron Baynes has been a disappointment in his first, and likely only, season with Toronto would be an understatement. Off-season signee Alex Len lasted a few weeks before getting waived. While the emergence of Boucher has been one of the lone bright spots of 2020-21, it’s clear that his natural position is at power forward and he’s at his best playing next to a traditional centre.

By necessity, Nurse has been forced to play small for extended minutes on most nights, much to the dismay of the head coach who is looking forward to having a couple more options with Birch and recent 10-day signee Freddie Gillespie.

Playing in his second game with the club on Sunday, Gillespie was the first big off the bench and played nine minutes. Birch logged 18 minutes off the bench in his debut, scoring four points and grabbing five rebounds. Baynes fell out of the rotation altogether.

“I thought he was pretty good,” Nurse said of Birch afterwards. “I think it’s been a little bit since he played, I thought there was a little bit of maybe just like, ‘holy crap, I’m in a game here’ just for a bit but I thought once he got going [he looked good]… His size looks good, he made good switches, he rebounded it good, he had a couple of good rolls to the basket, I thought he was really solid, really solid.”

Birch’s first points as a member of the Raptors came on the pick and roll with Kyle Lowry late in the second quarter. He also tipped the ball in off a missed Pascal Siakam jumper to close the first half – those are the types of buckets that you can expect from the gritty, always-active big man.

“I think he plays hard,” said Lowry, who made his return against the Knicks after a foot infection cost him the previous six games. “Throughout the years of playing against him in Orlando, he always played extremely hard, physical guy, he can guard, he can run the floor, athletic. I think tonight, he just tried to get his legs under him a little bit. That's going to take a couple games to do that. I know he's a tough, physical basketball player. He can rebound the ball with the best of them. He's going to be a big part of the rest of this season.”

Sunday’s loss, like most of this Raptors season, was bizarre. Toronto fell behind early and trailed by as many as 18 points before making a push in the second half – broken up by an 11-minute rain delay as water dripped onto the court from a leak in the roof at the famed Madison Square Garden.

With a chance to tie the game in the dying seconds, Siakam – who was already having a rough night – turned the ball over on a double-dribble in transition. The Raptors fell to 21-33 on the season, including 1-11 in the second game of back-to-backs and 8-21 in clutch contests (games within five points or fewer in the final five minutes). It was a fitting welcome for any newcomer, let alone one that is well versed on how far this franchise has come over the years.

Perhaps Birch can help the Raptors go on a late-season run and get into the playoffs for an eighth straight year – they’re two games out of the final play-in spot with 18 contests remaining. Even if he can’t and they don’t, he could have a future in Toronto beyond this season.

With the Canadian set to hit unrestricted free agency over the summer, this next month is something of an audition, both for player and team. It’s a chance to see how Birch looks in Nurse’s system, outside of his stint with the national team, and a chance for him to learn, get comfortable and decide if the fit is as he dreamed it would be.

“I just think it's the culture,” Birch said of playing for Nurse again. “He has a culture, I think, that's pass-first, and you play defence and then let the offence come naturally. There's a flow and that's what made me more comfortable for Team Canada. You don't really showcase one person over the other, everyone gets involved and that's what gives me great confidence.”

“I just want to have a good playoff push… So that’s my goal right now. I’m not really worried about free agency, I just wanna help this team win basketball games.”​