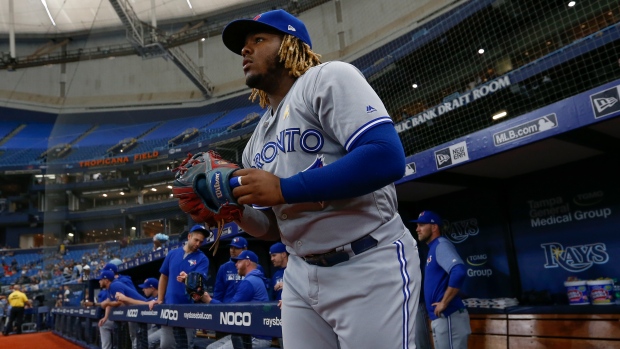 TORONTO — The Blue Jays don’t have a home yet, but they’re facing one of the toughest schedules in baseball regardless of the city they reside in.

If they end up playing games at all.

Slated to open their 60-game regular season on July 24 in Tampa against the Rays when the 2020 MLB schedule was officially revealed Monday evening, the Jays organization spent the day working through the logistical challenges that surrounded another positive COVID-19 test in Dunedin, and the subsequent grounding of a number of players who came in contact with that teammate.

While a group of Blue Jays — Vladimir Guerrero Jr. and Bo Bichette are two of the stars in town — were able to get on the field at Rogers Centre on Monday for a private workout that was closed to the media, it meant a portion of the Jays’ 60-man player pool is still stuck in Dunedin.

The team would not confirm who was left behind or the latest COVID-19 case.

On Monday morning, the Jays were also still awaiting test results for team personnel from Friday, as much of baseball experienced testing snafus over the July 4 holiday weekend.

Not a good start.

A week since intake testing officially began on July 1 when players reported to camps, the number of revealed positive COVID-19 cases has been reasonable, according to data released by the league, but it has not been a calming experience for many players across baseball.

In announcing their schedule Monday evening, the Jays left a reminder of just how much is still unsettled, with opening day for the club now officially a little more than two weeks away.

“While no final decision has been made on a site for Blue Jays regular season home games, the club’s preference remains Rogers Centre,” the statement read. “The team continues to pursue this option with the health and safety of the general public and the team at the forefront and will communicate an update as information becomes available.”

You can be sure that the federal government has been watching the MLB testing process closely, and the latest positive case emerging from Dunedin as the team got set to charter north isn’t good for perception.

Despite the uncertainty of where they’ll play home games, the Jays’ schedule won’t change, no matter if they’re playing at Rogers Centre or out of the club’s spring training facility, TD Ballpark, in Dunedin.

Either way, it’s a tough one.

Starting with three games against the Rays and then four against the Nats is a challenge, equalled perhaps by a stretch run that sees the Jays facing the Yankees 10 times in 19 games.

Another wrinkle this year — not that it matters for fans heading to the ballpark because that won’t be happening in 2020 — is first pitch for all Jays home games from Monday through Saturday will be 6:37 p.m. ET, rather than their usual 7:07 p.m. first pitch.

If they start at all.