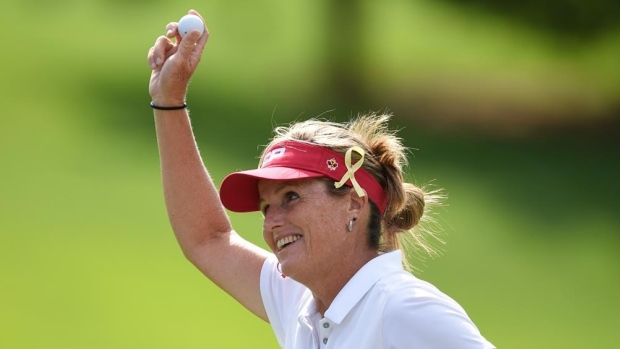 Lorie Kane went from Canada’s smallest province to the biggest stage in women’s golf, the LPGA Tour, and in the process found the confidence to achieve her dreams.

That career as one of Canada’s most successful golfers was recognized on Wednesday when Kane was named as part of the class of 2020 for Canada’s Sports Hall of Fame. It adds on to a long list of awards that includes induction into the Canadian Golf Hall of Fame and investiture into the Order of Canada.

“I’m humbled and totally overwhelmed,” said Kane from Charlottetown, where she was in the midst of quarantining after arriving home from Florida. “I wouldn’t be where I am today without sport in my life. School and academics were a big challenge for me. To be able to get into any sport gave me the confidence to become who I am today.”

Kane turned professional in 1996 and won four times on the LPGA Tour. Over the years she posted 99 top-10 finishes and eight top-10s in major championships. She also lost five times in playoffs. On the Legends Tour, a circuit for golfers 45 and older, she’s won five times.

While she remains active, Kane played only three events in 2018, and just one, the CP Women’s Open, last year.

She’s also been very active in charitable causes throughout her career. In recent years, she’s been front and centre for CP, the sponsor of the Canadian Women’s Open, helping the railway’s CP Has Heart campaign, which raises funds for children’s heart health.

As her playing time lessens, Kane taken on the role of mentor for young Canadian professionals and spent time inspiring youngsters to take up the game.

“The giving back part is super easy for me,” said Kane. “Sometimes it’s easier than hitting shots, to be honest with you. I hope I’m encouraging other young girls and boys to get involved in sport.”

She’s hoping her induction will give her a bigger platform to show how important sport is in Canadian communities and how it can build great people.

On her road to greatness, Kane was helped by some of Canada’s best players, including Jocelyne Bourassa and Sandra Post, both of whom are also in Canada’s Sports Hall of Fame, as well as Dawn Coe-Jones and Lisa Walters, fellow Canadian Golf Hall of Fame members.

As they did for her, Kane has given assistance to the next generation of Canadian players, including Brooke Henderson. The help wasn’t so much about how to hit golf shots as it was about life as a professional golfer on the LPGA Tour.

As her playing career winds down, Kane has few regrets, but admits to missing out on one milestone.

“I’ve achieved most of what I wanted,” she stated. “I really would have loved to have won that Canadian Open. I let that slip through my fingertips the week after I won my first event in St. Louis.”

That was in 2000, when the tournament was known as the du Maurier Classic. The sponsor was ending its support for the championship that year and no new backer had been found. Kane spent much of the week reaching out to potential replacements and pleading her case for new support in the media.

The event was held at the Royal Ottawa Golf Club and Kane went into the final round tied for the lead with Annika Sorenstam. But the busy week finally caught up with her and she ran out of gas on the back nine, posting a 76, still finishing in a respectable tie for fifth.

Kane has played in the national championship a record 26 times with her best finish being a tie for third in 2001.

Even though she spends a great deal of time at her Florida residence, Kane is most comfortable in Charlottetown, where, even in quarantine, she can look out the window at the red shores and ocean waves of Prince Edward Island. This is home and where he biggest supporters are.

“I can’t thank the people of Prince Edward Island enough,” said the 55-year-old. “They boost me up, they keep me grounded, they keep me very honest, and that’s just the way I love it.”

The induction ceremony for this year’s class has been postponed until 2021. That’s when Kane will join a list of fellow inductees that includes Diane Jones-Konihowski, Steve Nash, Sheldon Kennedy and Willie O’Ree. It’s an honour that seems fitting.