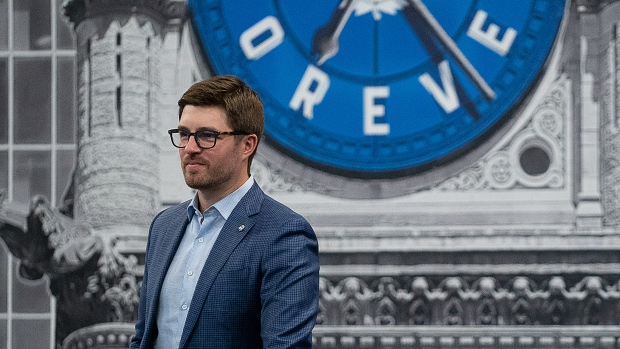 TORONTO — This version of the Toronto Maple Leafs is becoming increasingly defined by postseason failure. Kyle Dubas is on a mission to change that.

Toronto’s general manager has been vehemently defending his team since May, when the Leafs  blew a 3-1 first-round playoff series lead to the Montreal Canadiens and made another early playoff exit. As the Leafs opened training camp on Wednesday, Dubas was still justifying his belief that this season will produce a different result for Toronto than the past five.

It starts, in his mind, with letting go.

“We're not going to get distracted by redeeming ourselves from the past,” Dubas told reporters. "We only control what we do today and every day we’re moving forward. I don't think we can hide from [our failings] and run from it. I just think that we have to do everything we can as an organization to be ready when those [big] moments come again and [make sure] we're as prepared as possible. I have full faith in everybody in that room. But we can't allow our focus to get distracted on the long run.”

At the moment, Toronto is focused on its first day of on-ice activities Thursday. Several new players, including Michael Bunting, Nick Ritchie, David Kampf, Ondrej Kase and Petr Mrazek, will be vying for roster spots and, ideally, helping the Leafs find a better outcome this season.

Dubas touched on the newcomers and several other topics in his press conference, which was laced with a sense of urgency about what Toronto has yet to accomplish.

“Today is our opportunity to move past [our defeats], and we get to focus on things that we control in the present, to change that story in the future,” Dubas said.

On the pressure to end Leafs’ Stanley Cup drought

“We don't carry that burden of 54 years [since the last Stanley Cup] with us. Most of the people in that [dressing] room weren't alive then, so I don't think that resonates with them. I think what I've learned about this group in the last three and a half months is that they care tremendously about – rather than proving all of that [negative] stuff wrong – they care about proving themselves right. And I think that's the key to anything is that there's a number of teams all throughout sports that provide a great number of examples of overcoming things and if you go through and study them all, it's when that [battle] becomes personal and there's a deep believe in them internally [that things turn around]. That's what I've seen from this group in the last few months, which makes me excited and optimistic.”

On the belief in Leafs’ core of Auston Matthews, Mitch Marner, William Nylander and John Tavares

“It's easy to say you believe in something when everyone's very optimistic [about it early on], but true belief is tested when things are a little bit harder, and there's struggle and they fall, and you have to pick yourself back up and continue to move on. And that's how I feel about the group. I think that that group in there will win if we can continue to build and progress day to day, especially coming off the things of the past, and rolling ahead into the season and being focused on being the best we can be. I've seen massive maturity from all our young players. I believe in the group, deeply.”

On fielding trade offers for Leafs’ core pieces over the summer

“I'm not going to get into specific calls we get on specific guys. But the belief we have in that entire core is unwavering. In this job, you always have to consider [how to get] better and nothing came along from the end of our [first-round] series to today that I believe would have made us better. I believe when these big moments come [next], they are going to be at their best and they are going to have success.”

“That's a question that I can't really answer and that I don't really worry about. What I worry about every day is being the best I can for our staff and our players.”

“That was a plan that was formed by the Leafs' medical team and Auston that represented [how he felt]. We always wanted to avoid [surgery]. But when he ramped up his training in the summer and began to feel discomfort, our plan at the end of the season was that if he did feel that he would consult with [doctors]. The expectation is he'll be ready [for Game 1].”​

On contract negotiations with Morgan Rielly, who will become an unrestricted free agent this summer

“The contract negotiation thing with a flat cap [of $81.5 million] is [more difficult]. That's a personal matter for Morgan and a private one for us. You want to see where things go through the year with the cap [maybe going up].”

On off-season signees finding a role with the team

“We hope they all make a big impact. Rather than try to make a splashy move, we tried to acquire players that we think have just begun to show their potential or fit a specific need we have or need a chance at a bit of redemption and we're hoping they find that here.”

​On the Leafs’ developing a “killer instinct”

“We've had opportunities to put teams away, and we haven't done that yet. But I think in terms of resources [to help get there], it's in the way that we practice. We made changes to our staff and added Greg Harden as a [performance coach] to try to help our people and our staff and our coaches be at their best in moments when pressure comes, and I think you just have to lean into that. We can't hide from it.”