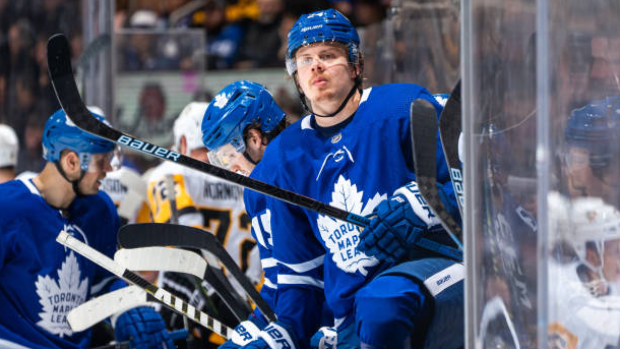 TORONTO — Kyle Dubas made his first major move of the off-season on Tuesday, and it’s unlikely to be his last.

In fact, the Maple Leafs’ general manager said trading Kasperi Kapanen, Jesper Lindgren and Pontus Aberg to the Pittsburgh Penguins for a first-round draft choice in 2020 (15th overall), forwards Evan Rodrigues and Filip Hallander and defenceman David Warsofsky was just a first step towards trying to make the Leafs a more competitive club.

“I don't think this is going to be it for us as we go along, and I think that we need to gain greater [salary cap] flexibility than what we have,” Dubas told reporters on a Zoom call Tuesday afternoon. “We've got our own business to take care of with [Travis] Dermott and [Ilya] Mikheyev as restricted free agents, and this will give us some space beyond them to address all the other needs that we feel we have. Without the flexibility or the space to do so freely we would be really restricted in what we can do and this opens it up a little bit for us.”

Kapanen had two years remaining on his three-year pact, with an AAV of $3.2 million, and every penny counts for Toronto since the NHL is keeping a flat cap of $81.5 million for the 2020-21 season. CapFriendly now has the Leafs with nearly $8 million of projected space for next year, and Dubas is actively assessing how best to use that in Toronto’s favour.

“Anywhere where we can improve our roster over where it was is how we want to use the cap space,” he said. “I think you could use it in the off-season, or you could let it accrue during the year and then let the team get into it and see what the needs are and use it then. We wanted this flexibility so that we could be flexible inside the marketplace for either free agents or for trades and so we'll keep an open mind about that and also keep an open mind to the fact that it would be great for us next year during the season [to be able to] add once we got into the year.”

Dubas noted that the Leafs haven’t been able to add a top-end player mid-season since acquiring Jake Muzzin from the Los Angeles Kings in January 2019, and Toronto needs more incoming personnel who can have an impact right away.

And if doing that requires moving their newly acquired first-round pick, then so be it.

“I would say that we're open to keeping the pick, but I think with the spot that we're at with our team right now we're also open probably to moving it if the right deal came along for someone that could help us now,” Dubas said. “We'll go through as though we're going to be selecting there at 15 and there's players at every position for forward, defence and goalie that are of interest to us at that spot.”

Stockpiling players for the future isn’t exactly Toronto’s top priority, though. Earlier this month, the Leafs failed yet again to advance in the playoffs, losing their play-in round series against the Columbus Blue Jackets before the NHL’s postseason tournament even really started.

Dubas has taken considerable heat since for the Leafs’ perpetual underachieving, something he can’t even fault his detractors for.

“When we don't reach our expectations or potential, I think that the blame deserves to come directly to me,” he said. “The criticism I would say is deserved. We didn't reach expectations and that falls on me. I accept that and that's fair and that's fine.”

What Dubas can do now is construct a roster that takes Toronto to the next level. But between a stagnant salary cap and the ongoing global COVID-19 pandemic, that’s easier said than done. Evaluating players and prospects has never been more challenging, especially when everything from the format of next season to where games will be played to what a schedule will look like is very much up in the air. On top of that, the possibility of playing without fans in attendance will severely limit cash flow for some teams and could curtail spending.

“I think assessing the free agent market is really difficult right now because it's so different than anything else that we face,” Dubas explained. “With the cap where it is, and different cash restrictions on all teams in the league, what you're able to do [is changing]. I can look at the list [of free agents] right now and there are certainly a number of players that have been very good for a long time. That's obviously a positive but knowing what the market is going to bear out for them in terms of opportunity and contracts I think is really difficult right now.” 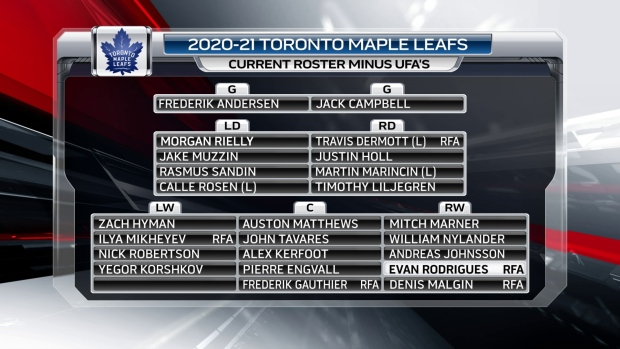 That’s one reason why the Leafs were so pleased with their return from Pittsburgh. While Rodrigues is a pending restricted free agent, Toronto likes what depth the 27-year-old winger could potentially provide. A native of Toronto, Rodrigues has appeared in 199 NHL contests to date - mostly with the Buffalo Sabres - and produced 72 points (27 goals, 45 assists).

At this stage, Dubas sees more depth as a strong course of action for Toronto.

“That's why it was important for us to have Rodrigues in the deal as well, and we’ll begin to have a conversation with his representatives about the opportunity that may be here for him,” Dubas said. “Without knowing what the schedule and what the season is really going to look like [next year], and if the games are in a compressed format, or there's lots of travel still, I would worry about leaving [head coach] Sheldon [Keefe] and the team in a bad spot if we depleted [our] depth throughout.”

Hallander may not be an option for the Leafs immediately next season, but acquiring him was something of a years-long process for Toronto. The 20-year-old centre was high on the Leafs’ draft board in 2018, but they selected Sean Durzi (since traded to the Los Angeles Kings) in the hopes Hallander would fall to them later in the second round.

Ironically, Pittsburgh selected Hallander with the pick directly after Toronto’s, at 58th overall. He has yet to play a professional game in North America after spending the last two seasons in the Swedish Hockey League, but Dubas is as high on Hallander’s potential now as when the Leafs first scouted him.

“We had done a lot of work on him leading up to the draft, and the things we like about him as a player is that he's extremely intelligent, very competitive and has shown very well playing in the Swedish Elite League on a very good team program on their top line,” Dubas said. “So we're excited for him, we think he'll certainly add to our depth in our prospect pool up front and we're really excited.”

As the final teams finish out their Stanley Cup postseason runs this year, and the entire league gets into off-season mode, Dubas predicts more conversations and potential moves could start being made. While conversations with representatives for Dermott and Mikheyev will also heat up in the coming weeks, Dubas’ goal in Tuesday’s trade was to give Toronto the best possible chance to better itself.

“This show us that our players do have good value around the league and we could accrue solid assets in return for them, should we elect to do so,” Dubas said. “So right now we feel good about where we're at, but we'll have a better idea of what more we may need to do as we gather more information, as the season comes to a close and [other teams] have to give their evaluation of where they need to proceed to get ready for next season as well.”