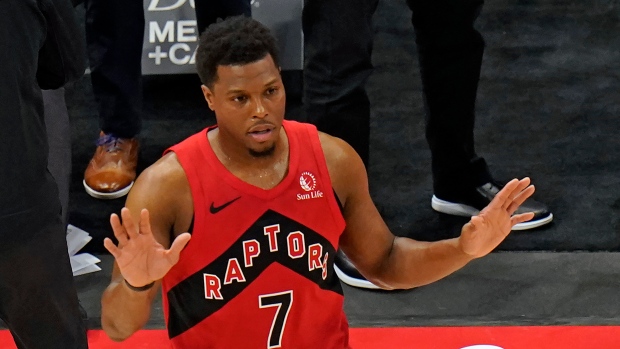 TORONTO – Kyle Lowry didn’t waste any time. He had waited too long already.

The all-star point guard was nearing a special milestone – 10,000 points as a member of the Toronto Raptors – last week before a toe infection kept him out of a couple games. He struggled in his return, a loss to Indiana on Monday, and was two points away when he got ejected late in that contest.

With his team hosting Milwaukee on Wednesday, you know he wanted to get it out of the way quickly. Looking to run after an early steal, Lowry caught a pass from Fred VanVleet, he took one dribble, stepped into the shot, and pulled up from 25-feet. It was a fitting way to reach, and pass, 10,000 points in a Raptors uniform – that’s a shot he’s perfected during his time with the franchise – and it came less than one minute into the game.

It was far from the first big landmark that he’s hit, and it won’t be his last, but it does speak to his longevity with one club – a rarity in the NBA these days. Only two other players have scored 10,000 points with Toronto – Chris Bosh (10,275) and Lowry’s good friend and former teammate DeMar DeRozan (13,296) – and only five other active players have done it with their current team; Golden State’s Steph Curry and Klay Thompson, Portland’s Damian Lillard, Washington’s Bradley Beal, and Milwaukee’s Giannis Antetokounmpo.

“It means a lot to be able to do that with one franchise,” Lowry said, following a hard-fought 115-108 loss to the Bucks. “That's a lot of points for one franchise.”

There was a time when Lowry wasn’t sure if he would score 10,000 points in his career, let alone with one team, and he certainly didn’t expect to accomplish that feat with the Raptors.

The unlikely, but mutually beneficial, nine-year relationship between the fiery point guard and the organization he’s become synonymous with has been well documented. He expected his tenure to be brief when he was traded to Toronto in 2012. He lost his starting job to Jose Calderon in his first year with the team, and was all but officially traded to New York during his second campaign before the deal fell through. He almost left as a free agent in 2014, and then considered going elsewhere again in 2017.

Instead, Lowry became a six-time all-star with the Raptors. He matured as a player, leader, husband, father, and as a man with the Raptors. He become an Olympic gold medalist, won an NBA championship, and in the eyes of many has established himself as the greatest player in franchise history.

Maybe it was fate that has kept them together for nearly a decade, but neither player nor team would be where they are today without one another.

“I would have never expected it to be here, and I tell you guys that all the time,” said the 34-year-old, who will turn 35 in March. “But it just shows that in life things happen for a reason… You can't pick and choose where you’re meant to be, but when you are there you take full advantage of it.”

“I think it’s amazing, honestly,” said Norman Powell, the Raptors’ second-longest tenured player, who’s been teammates with Lowry for six seasons. “To have a feat like that, you don’t see that too often, with players being in an organization that long and being able to do that.”

“He’s had a heck of a career,” said Nick Nurse, who has spent eight seasons in Toronto with Lowry – five as an assistant and the last three as a head coach. “This is another landmark… I think he’s made himself into a heck of a player, and I think the scoring is the part of it he’s worked on, the shooting. He’s improved his shooting going both ways. He’s improved the depth of it. He’s improved his finishing at the rim. That all adds up to him getting to a special landmark of 10,000. He’s been a hell of a player in a Raptors jersey, that’s for sure.”

Lowry has worn different hats throughout his tenure. He often took a backseat to DeRozan offensively, and he accepted his role as a table setter during the championship season in 2018-19, behind Kawhi Leonard and the emerging Pascal Siakam. However, through it all, he’s become one of the best in the league at reading the game – a credit to his exceptional basketball intellect. More often than not, he knows what’s needed from him and when, and he’s able to deliver.

Sometimes that means drawing a charge – he took another two of them in the second quarter against the Bucks. Sometimes that means diving for a loose ball, wrestling a rebound away from an opposing big, or deferring to his teammates. But whenever his team has needed him to score, Lowry’s shown that he can put points on the board.

On Wednesday, the Raptors were without OG Anunoby, who is dealing with a calf strain. Siakam was battling a knee injury that had sidelined him for the previous two contests, and Lowry himself wasn’t at full strength, still hobbled by the foot ailment. Toronto was simply overmatched against the size and talent of a really good and fully healthy Bucks team, who were threatening to pull away late in the game.

With the Raptors’ offence sputtering, Lowry did everything he could to keep them in it and give them a fighting chance. He scored 14 of his 21 points in the fourth quarter, hitting all five of his shots, four of them from beyond the arc. They chipped away at the deficit, and even took a brief lead early in the frame, but VanVleet and Stanley Johnson missed some good looks down the stretch, and they couldn’t pull off the comeback.

For everything that Lowry and the Raptors have accomplished together, this is a new challenge. The loss dropped them to 7-11 on the season. The team has shown some signs of turning the corner after a slow start to the campaign, but they’re still a long ways from where they’ve been over the past few years. At least for now, they’re not jockeying for position with Milwaukee atop the Eastern Conference, they’re trying to claw their way back into the playoff picture.

Lowry isn’t used to losing – he hasn’t missed the post-season since his first year with the Raptors – and you can bet he’s growing tired of it. But with time, experience, and all those points he’s scored over the years, comes wisdom. Even Lowry, as fierce as competitors come, can find the silver lining in it.

“It's a challenge,” he admitted. “My joy, honestly, is watching Norm, Freddy, Pascal, OG, grow. That's my joy. And winning basketball games. I just want to be able to continue to play at a level where I can help these guys grow and get better… That's where I get the pride and joy, with being with this team. But the challenge of getting us to the position where we can make the playoffs, that's fun. It sucks when you're losing, but we’ve got to be the hunters again. We've been the hunted for so long, and now we've got to go hunt. And I think that part is going to be pretty cool, once we continue to get better.”​