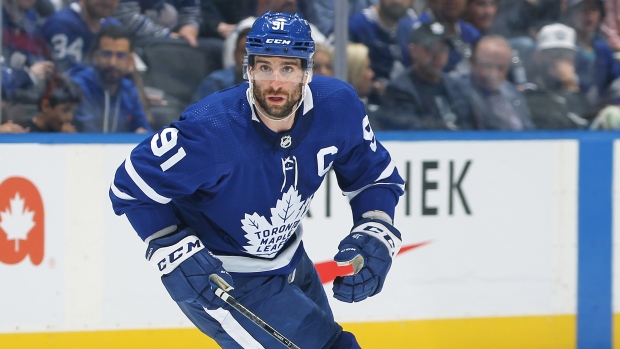 TSN SportsCentre Reporter Mark Masters reports on the Toronto Maple Leafs, who skated in two groups at the Ford Performance Centre on Tuesday.

John Tavares will be sidelined at least three weeks with an oblique strain. The Leafs centre sustained the injury during Saturday's pre-season opener against the Ottawa Senators. Following a day off, Tavares practised on Monday, but didn't feel right. Testing on Tuesday revealed the injury.

"He's a huge part of our team," said coach Sheldon Keefe. "Obviously, you're not going to replace John, but this is an opportunity for us to look at others to step up and take advantage of that opportunity."

It's a setback for Tavares, who turned 32 last week, and was hoping to build momentum from his off-season training.

"There's some things, certainly, that I really like that I built some good habits on," Tavares told reporters on Monday. "It's on me to continue those things up through the season."

Tavares also sustained an oblique injury in 2019 when he was preparing to play in the world championship.

Alex Kerfoot, who filled in well as Toronto's second-line centre when Tavares missed most of the 2021 playoff series against the Montreal Canadiens, is a leading candidate to step up again. Kerfoot has been skating as a centre since camp opened last week.

"I have not had a whole lot of time to process it," Keefe said of the Tavares injury. "Obviously, we've been putting Alex there throughout camp. [Calle] Jarnkrok has the ability to play up the middle. We have a number of different options. In the time we have remaining we'll look at those."

Kerfoot and Jarnkrok skated on a line together at Tuesday's practice.

"It's a lot of fun playing him," Kerfoot said. "He's easy to read. Makes a lot of good plays. Plays a similar game to me and I think that helps. He's a righty and I'm a lefty so he can take some draws on his strong side and I can take them on mine and he can play down low as well. A lot of the game right now, it doesn't really matter if you're playing centre or the wing, especially when you got guys familiar playing down low in the D-zone, it's pretty interchangeable."

Kerfoot is entering the final year of his contract.

"Not too different, really," the 28-year-old said of the feeling."There's pressure in this sport no matter what. Whether you're in a contract year or not, you want to do your best for your team, yourself and everyone involved."

Kerfoot has emerged as an important figure in Toronto's dressing room. He serves as the team's NHL Players' Association representative and was invited to join the Leafs extended leadership group last year. In Saturday's split-squad game, he served as an alternate captain.

"It means a lot," he said of wearing a letter. "It's an honour putting the Leafs jersey on every time you get to do it. Getting to do it year after year here has been really special and that just adds to it. It adds to the feeling of being part of this group. Every day that I get to be involved in this organization is a special day."

An emerging option for the Leafs when it comes to centre depth is Pontus Holmberg, who took Tavares' spot on a line with William Nylander at Tuesday's practice. The 23-year-old is further along in his development than Keefe anticipated.

"Plays hard, but also has a good skill-set," Keefe noted. "When the puck hits his stick he makes a good, hard crisp pass. Can shoot the puck. Has really good habits and details away from the puck. He's another really good, smart versatile player that maybe doesn't have one thing that pops, but is really good at a lot of things and you can do a lot with that as a coach and a team."

Holmberg, who was the MVP of the 2021 Swedish Hockey League playoffs, made the jump to North America and the Toronto Marlies of the American Hockey League late last season.

"He's getting more comfortable with English," Keefe said. "English isn't quite where it needs to be or, frankly, where it is for most Swedes that come over so that's gotten better. He's far more comfortable. For me, seeing him for the first time, he's right there and in the mix so really happy with him."

There was some good news on the injury front for the Leafs on Tuesday. Defenceman Jake Muzzin skated again on his own and is scheduled to join the main group on Wednesday. He's been sidelined with back discomfort since camp opened.

"It's gone well," said Keefe of the recovery. "I'm told he's going to join us for practice tomorrow so that's positive. He probably won't do everything that we do in the practice, but he'll be out there."

The injuries to Muzzin and Timothy Liljegren (hernia surgery) have created a greater opportunity for defencemen looking to win jobs like Victor Mete and Jordie Benn. It's also drawn more attention to the absence of restricted free agent Rasmus Sandin.

"It goes without saying that there would be tremendous opportunity there," noted Keefe. "There's a business side to all of this that's out of my control, but for the guys that are here you're seeing there is opportunity there. Both opportunity to make our team and grab onto a role and get comfortable with their teammates, but also just to get prepared to play an NHL season."

"When you've played as long as he has, you just kind of acquire a calmness over time, a confidence and he certainly has that," Rielly said. "He knows his skill-set and ability and plays to his strength."

Unhappy with how the players in the first practice were executing a drill on Tuesday, Keefe stopped the proceedings to refocus the group. It didn't work and shortly after resuming the drill, the coach stopped practice again and had the players do an impromptu conditioning skate.

"There's always times maybe when they're not sharp for whatever reason and they're able to dial it in really quickly and get going," Keefe said. "We weren't able to do that as quickly as I would like to see us do it so we needed to shock the system a little bit and get their attention. We were able to do that and move on."

Sheldon Keefe not happy with focus at Leafs practice

Stopped proceedings and having the guys skate pic.twitter.com/OktaqTACT3

Rielly, the longest-serving Leaf, shrugged it off.

"It's just part of training camp, I guess," he said. "Nothing really crazy. Just a misunderstanding of a drill and you get on the line. It's a tale as old as time."

It was, however, a rare move by Keefe.

"Not really good enough from us," said alternate captain Mitch Marner. "We know that drill pretty well and messed it up a couple times in a row ... It's never happened before so we're not worried about it."

At times last season, the Leafs played down to their opposition and seemed to lose focus.

"There's lots of things we can still improve on as a group and just being committed every day and not having any lapses," said Kerfoot, who was part of the second practice. "The regular season is a long process and no matter who we're playing, day in day out, whether it's a practice day or game day, we want to be focused on being dialed in at all times and maximizing what we can get out of every day."