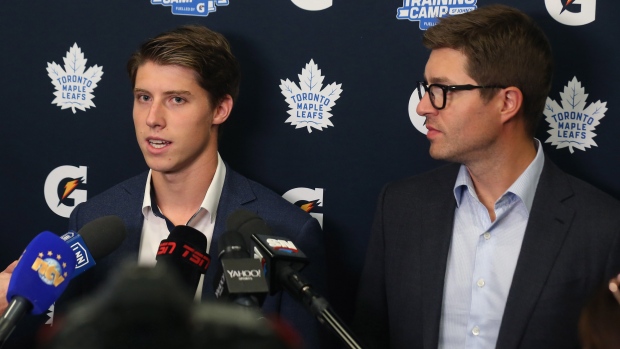 The following is a transcript:

DUBAS: "I would like to thank Mitch, his family, his representation the work that they put in in the last number of days to have this matter come to a close in the way we wanted it to from the very beginning, which was with Mitch committed to our team for an extended period of time. Now we can get back to business here and get back to work while we are here in training camp with no distractions and nothing hovering above the team. We can all just be at our best as we get rolling through the year."

Q: What took so long?

DUBAS: "So long? We missed one day of camp. You're a little more antsy than me. These things take time (laughs) and we’re just happy to be here. We've missed no games and that’s really the objective. We had a situation last year that did take long and we're thrilled to be here. Obviously  he wanted to be here and we got it done."

Q: Mitch, on that front, did you kind of look at Willie and give yourself your own little deadline, that you didn't want to go through what Willie did and maybe speed things up?

MARNER: "Me and Kyle were talking before and  I expressed to him that I didn’t want to miss training camp, I didn't want to miss games and that goes back to I think the middle of last year and from this process on and the last 48 hours or so we kind of just sat in a room talked to each other and made sure I wasn’t going to miss too much of training camp and that I was going to be ready to play the first game. And, like Kyle said, it's great to be over with and we're happy to be here."

Q: How does it feel?

MARNER: "Great. I'm excited to be part of this team. Obviously, seeing this roster and everything that happened in the summertime, it looks like a great team and hopefully I can contribute to that and help out."

Q: Kyle, you've got the core of this team together for the better part of the next decade, what does that mean to you?

DUBAS: "To our whole organization it means a lot. It was one of the things we looked at when we were going through the decisions you have to make with different players. I understand that people look at it and say no team has done it this way before. That said, we have these guys committed to us for an extended period. We will get into a stretch here where we can just come to the rink every day and play. We won’t have any of this hovering above. People will make their own discussions or try to create other controversies, but I don’t really think we have any at this point. We can just enjoy being together and have fun being together as a program and continue to grow as a program without having to worry about anyone going anywhere. To me, in my position, it means a lot. It was important for me to deliver that for our staff and our players so that they could just come to work every day and be at their best as well. So, that's the most exciting part for me."

Q: Kyle, what do you like about the deal? Why is it a fair deal from the team's perspective?

DUBAS: "I think we got a commitment from Mitch for six years and that should be as he enters his prime and then goes into his prime. I know everyone is not going to agree and Mitch would want more and we would want less, but it’s something that we both agree on and can move ahead with it. The way we evaluate these things, we think that all of the contracts we sign, the players' production and output and what they bring to the organization will match their level of play. I think we all hope they exceed it and that sets them up well for their next contracts."

Q: What are you going to do about being so high above the salary cap?

DUBAS: "Well, I got a great person to handle that, his name's Brandon Pridham, he’s in the back and that pressure will go to him. You got some tough questions, I like it, straight heat, the fastball. I like it."

​Q: Mitch, what role did social media and public sentiment play in moving this deal forward?

MARNER: "Not too much. Social media is a big thing nowadays, but not too much. Tried to stay off it, tried not to look at it. You know, like I said, it's a thing that can affect some people, but tried to stay off it. Want to just move forward. Like I said, happy to be here, happy to be done all that process and looking forward to helping this team."

Q: Kyle, after you signed John you made the statement that you were confident you could get Mitch and the other two guys signed. Can you talk about the process and what you've gone through the last 15 months?

DUBAS: "It’s been interesting. Every single one of the players is different. They have different personalities. They have different backgrounds. They bring different things to the club. It was a very unique situation. You got young players who are extraordinarily talented and already some of the best at what they do. We all have room to grow. They would be the first to tell you they’re not close to reaching their potential yet and it is our job to help them get there and their job to continue to get here. They have already accomplished great things in the league individually. I know, in speaking to all of them, it’s important to them that now we are starting to grow as a team and starting to work towards greater team success. The key thing for me was that they all believe we are on the cusp of being able to do that. They see their own part and how it influences how far we can go as a group. It was an interesting process. I'm excited that we can know we are all going to be in this together for an extended period. I think that should be exciting not only for our players and staff but also our fan base."

Q: How much have you grown as a GM? Growing pains?

DUBAS: "Lots. I don’t know that we’ll ever be in that type of situation again, especially not jumping right into it. I’ve learned a lot. I’m open to say I screwed some things up and made some mistakes and tried to learn from them. I am not afraid to ever admit that. I think that’s how you learn your most and your best. I am happy that we've got to the conclusion we have gotten to. You learn a lot in the process and what you would do differently the next time around. In the end, I am happy we were able to deliver all of the three guys that were impending and bring John in as well and try to continue to improve our team as we did so. We are excited about that."

Q: What did you screw up?

DUBAS: "Lots. I wish everything was done with all of them in one day. They all took long periods of time. With William, I think we’ve talked about that at length. I wish we would’ve been on it earlier and gone through it earlier. With Auston's case, I don’t think there was anything. We had the information that we had and were projecting ahead where it would go with him, so we executed that one. In Mitch’s case, we got it in and done before camp. You look back and always are looking to find ways to do things better and find ways you could’ve improved the process throughout to come to a conclusion sooner. The key thing is we are all here. Different things that I’ll reflect back on after this has come and gone, I’ll continue to adjust. I'm fortunate that we’ve got a great staff and when things are not looking the greatest, whether it’s Brandon, Lawrence or Shanny on our staff, they do a good job of helping out so I’m fortunate that way."

Q: You spoke about the possibility of having a blunt discussion with Mitch, did that conversation take place?

DUBAS: "We had a sit-down on Thursday for quite a while and it was great for Mitch to explain to me how he felt and for me to explain to him the reasons why we were at where we were at and what we were proposing, and about how he fits into the team and how the team was going to move forward and everything of that nature. We had that opportunity Thursday. I don’t want to speak for Mitch, but I think it was a real positive in the process."

Q: Mitch, what did you say?

MARNER: "I just expressed to Kyle that I don’t want to miss any games, I want to make sure that I'm with team as soon as possible and I think from that moment on, the next day for so, everyone on both sides just bared down and realized that both parties want the same thing and we came to agreement. We're here, we've only missed a day or so and get to get on the ice tomorrow with all the guys and it's exciting."

Q: How will you handle the pressure of being such a highly-paid player? Will you get caught up in having to justify it?

MARNER: ​"I mean, I'm from Toronto, I live here and I play here as well so there's pressure in that always and you don't think about it, you just go out there and play hockey like you've done your whole life."

Q: What was the role of your family and agent in this process?

MARNER: "My family's been with me through everything that I've been through in my hockey career so they're definitely people I can always lean on and ask those hard questions and depend on and same with Darren (Ferris) he's been there a long time with me. All three of them kind of together with my brother as well they're just someone I can always depend on and ask those heavy questions and get their honest opinions out of it so they meant the world to me throughout this discussion and without them, who knows what would've happened but, like I said, just glad it's over. It's time to get to work and have fun with it."