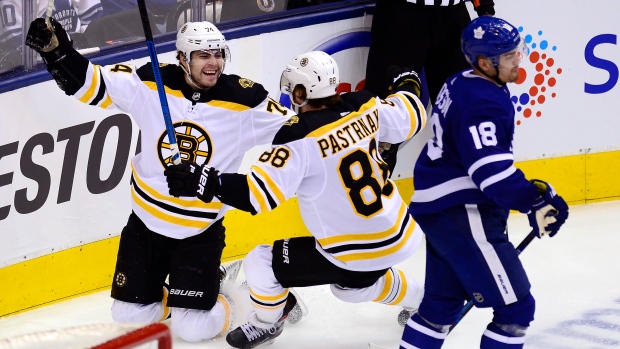 TORONTO – Somewhere between grabbing an early lead, and a powerful final push to nearly force overtime, the Maple Leafs lost their way on Sunday.

So, instead of eliminating the Boston Bruins in Game 6 of their first-round Stanley Cup playoff series, the Leafs' 4-2 loss will put them right back on a plane bound for Boston, and the decisive Game 7 that awaits.

“I thought we were really ready, we were jumping, big time,” said Leafs’ coach Mike Babcock. “And then as soon as we had a little adversity, and they scored twice [on the power play], we didn’t recover. I don’t know if that’s the emotions got the best of us, but we couldn’t get it back in check.”

Chalk it up to another missed opportunity for Toronto, the second time in three games of this series that a bad period and a half has given way to a furious final comeback that falls just short.

When Sunday’s game began, Toronto looked exactly like the speedy, tight-checking team that downed Boston in Game 5 to put that team's season on life support. The Leafs controlled the pace and kept Boston off their defence, and by halfway through the frame, Morgan Rielly’s point blast through traffic past Tuukka Rask had spotted the Leafs a 1-0 lead.

It was the first and last lead the Leafs would hold all game.

In a span of less than six minutes after that, the Bruins had capitalized on two consecutive power plays to move ahead of Toronto 2-1, while the Leafs were 0-for-2 in the first period on their own power play tries.

The first Boston goal by Brad Marchand materialized from a scrambled face-off, allowing the Bruins’ winger to pounce on the puck and deflect it off Leafs defenceman Ron Hainsey, fooling Frederik Andersen with the misdirection. Torey Krug’s follow-up goal was off a rebound, but in the end would look like a dagger right to the Leafs’ heart.

“Suddenly they were up 2-1 and they got momentum on their side,” said Auston Matthews, who scored the other Leafs’ goal. “I thought we got in our own way. They were forechecking pretty hard and we weren’t able to breakout cleanly there kind of midway through the game.”

The Bruins were all over Toronto to start the second period, forcing the Leafs back repeatedly in the middle of the ice and preventing any sustained offensive zone time.

Near the middle of the second, the Leafs were being outshot 19-6, and had gone more than 14 minutes from the first period on without registering a shot on goal.

That was a recipe for disaster, and it was only a matter of time before the Leafs sloppy defensive play caught up to them with Jake DeBrusk’s first goal of the postseason, the final flourish of a two-on-one rush with David Krejci.

“I thought they had one of the best periods they had all playoffs in the second period,” said Babcock. “We didn’t play fast enough or execute. We weren’t as good as we could have been for a stretch of 30 minutes there. They skated way better than we did, and that doesn’t happen to us very often.”

Toronto retired to its dressing room for the second intermission and talked it out, coming back for the third with what John Tavares deemed to be a “good attitude.” And it showed.

The same way Boston brought the game to Toronto in the second was reciprocated by the Leafs with a dominant third.

Matthews finally gave his team a much-needed second life in that frame when he fired his fifth goal of the series past Rask. After failing to get on the scoresheet in Game 1 or Game 2, Matthews has been the Leafs most consistent forward ever since, and his goal in Game 6 was the third time the left-shot has scored from the same right circle spot.

The aggressive play of the Leafs looking for an equalizer after that did feed the Bruins’ transition game and offer up a few good scoring chances, but Andersen was terrific between the pipes to give the Leafs every chance to reach overtime. Toronto just couldn’t beat Boston once more to make Andersen’s hard work in a 37-save performance worthwhile.

“I thought we got going a bit in the third period,” acknowledged Babcock. “But in the end I thought this was the best game [Boston’s] played and I didn’t think we were as good as we could be.”

Toronto has about 48 hours to correct that if they want to win the franchise’s first playoff series in 15 years. It was just a season ago the script was flipped, and the Leafs were staving off elimination in Game 6 of their first-round series to force a Game 7 in Boston; Toronto led that final game 4-3 in the third period, before losing 7-4.

This iteration of the Leafs, though, is patently against dragging the past into their present. What Toronto knows for sure is it’s not ready for the ride to end just yet.

“We like each other, we like our group, we like hanging around, we want to be together,” said Babcock. “The only way you get to be together is you play good and execute and win. We have a good group that plans on having a good run and in order to do that, we have to go into Boston and win a game.”

“We know how they play. They know how we play,” added Rielly. “It just comes down to a commitment to doing it right. We’ve been together a long time, we know what’s going to make us win, it’s important we go out and do it.”

For the first time this series, the Leafs held the Bruins without a power play goal in Game 5, their penalty kill a perfect 3-for-3. But whatever Toronto did well in that effort it promptly forgot about in Game 6.

Toronto went 0-for-2 on the kill Sunday, the second time in three games that Boston has been perfect on the power play. To this point in the series, the Bruins are 7-for-16 on the power play (44 percent), but have had their best success with the extra man in Toronto (5-for-7), compared to going just 2-for-9 on their home ice.

On the other hand, the Leafs have struggled to consistently get their own power play going. Including Sunday’s 0-for-3 effort with the extra man, Toronto’s 3-for-14 on the series, far off the Bruins’ more blistering pace.

Given how special teams have favoured the Bruins in this series, Toronto’s attention has to be on staying out of the box and forcing Boston to try and beat them at even-strength.

Rielly’s right on it

During the first period of Game 6, the NHL revealed the finalists for this season’s Norris Trophy, and Morgan Rielly wasn’t among them. But on Sunday, Rielly played like maybe he should have been.

The blueliner was Toronto’s best skater throughout the game, using his skill and speed to pressure the Bruins in the offensive zone and he broke the puck out well from the Leafs’ end. In a game where the Leafs struggled to get any pucks on net for long stretches, Rielly was a catalyst for the meager success they did have – when he was on the ice, Toronto led Boston 23-18 in shot attempts through two periods.

Rielly’s goal was a long time coming in the series, marking his first in the six games and putting his point total at five, extending his four-game point streak. While so many of his teammates looked stuck in the mud for much of Sunday’s contest, Rielly consistently had good jump and was one of the few bright spots for Toronto through a tenuous first 40 minutes.

In the third period, when the Leafs really started to push, Rielly was at the helm again. He ramped up the physicality with a bruising play on DeBrusk, riding the Bruins’ winger into the boards as he lost his helmet in the tussle. The play earned Rielly a rousing ovation from the crowd, as he and DeBrusk jawed at each other all the way back to the benches.

It wasn’t enough to single-handedly bring the Leafs back, but it was a Herculean effort on Rielly’s part to try.

The only player on the same level as Rielly throughout Sunday’s game was Andersen in net.

Toronto’s goalie had to be sharp early as the Bruins got a couple quick strikes on net before the Leafs took over in the early goings of the first. He was seeing the puck well through traffic initially as well, making two big stops on the Bruins’ initial power play attempt. Marchand’s shot that finally beat Andersen took a turn off Hainsey’s skate, and the goalie was a half-second late reacting as the puck trickled by him.

Andersen responded by making two huge glove saves, on Bergeron and then Matt Grzelcyk, to keep the Leafs’ deficit at one at the end of the first period.

The goaltender was under siege in the second, turning aside six shots before DeBrusk broke through off a two-on-one play, with Andersen playing too far to his left to get back in time to make the stop.

But despite the goals-against, Andersen was as rock solid as could be expected given how the Bruins controlled the pace of the game and set up shop in Toronto’s end at 63 per cent possession through two periods.

The final frame though was Andersen’s finest. While Toronto did a better job keeping play in Boston’s end, when the Bruins took off on odd-man rushes, Andersen was there to make the improbable saves, including one halfway through the third from in-tight that was especially difficult.

Babcock said it was “disappointing” the Leafs couldn’t score one more goal for Andersen and complete the comeback, but Andersen playing so well has to infuse Toronto with confidence ahead of its biggest game of the season.

Next up
Toronto travels back to Boston for Game 7 on Tuesday.