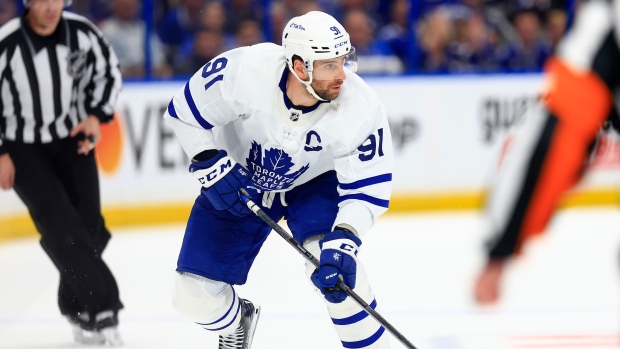 The Maple Leafs held a skate (game group) and practice on Friday at the Ford Performance Centre.

John Tavares took part in a team skate for the first time since suffering an oblique strain on Sept. 24.

"It was planned," said coach Sheldon Keefe. "He was in the morning skate group, which is a lighter load than the main practice group. It's part of his progression. He stayed out after and got some individual work in. Very encouraging sign that he felt good."

The Leafs will start ramping up the captain's workload on Monday and Tuesday. Toronto will open the regular season with games against Montreal and Washington on Wednesday and Thursday before hosting Ottawa on Saturday Oct. 15.

Initially, Keefe said the 32-year-old centre was expected to be sidelined for at least three weeks (until Oct. 15).

Coach checks in with the captain ahead of Leafs morning skate

"Obviously, we would love and would want John back, but we will be very mindful of the bigger picture and making sure that it's not something that's going to linger with him," Keefe stressed. "He's feeling really good and it's encouraging and positive, but ... we'll be very mindful of the fact we want him to be free and clear of this before he gets into game action."

The Leafs will get a couple players back from injury on Saturday. Defenceman Jake Muzzin (back discomfort) and winger Pierre Engvall (foot) will play in the final exhibition game, Keefe confirmed.

Whether he cracks the opening-night lineup is still to be determined, but there's no doubt that the Nick Robertson shot is ready for the National Hockey League.

"He's got one of the hardest snapshots I've ever seen, and I've seen a lot of them, so that's saying something," gushed goalie Matt Murray. "He can score from pretty much anywhere."

How did the 21-year-old winger, who stands just 5-foot-9, develop such a hard shot?

"Just my upper-body strength," Robertson explained. "A lot of pushing up, a lot of triceps and chest [work]. Also, just trusting my shot. Sometimes people let off on their shot, but me, I try and put as much weight into it as possible."

Robertson has stood out at training camp and not just because of his shot. The left winger produced three assists in Monday's game in Montreal. He's up to seven points in four exhibition games.

"He's small but he's strong on pucks," said gritty winger Zach Aston-Reese. "He's got tenacity. He's fast. He's got a good shot. He's got the whole package for a little guy ... You watch the way he protects the puck against bigger guys out there, it's pretty impressive."

Does Robertson feel any extra pressure with camp winding down?

"No, I don't," he said firmly. "I'm pretty confident in myself and what I've done ... I'm pretty happy with my training camp. Now, I just got to focus on playing hard tonight and possibly tomorrow and finish off strong."

Toronto's roster on Friday features mostly bubble players or guys destined to play in the American Hockey League. The Detroit Red Wings, meanwhile, will be dressing a lot of their NHL regulars.

"If you're playing in tonight's lineup, you have a great opportunity to compete against NHL players and show that you belong and that you can help us," Keefe said.

Robertson will play on a line with centre Pontus Holmberg and Denis Malgin. That trio was also together last Friday during a game against the Ottawa Senators in Belleville, Ont.

Malgin, like Robertson, has hit the scoresheet regularly in the pre-season. The Swiss League import has three goals and three assists in four games.

"Very skilled guy," Robertson observed. "I like his style. He kind of reminds me of myself. He's a smaller, shifty guy. He creates a lot of plays for his size."

Keefe says some players who play on Friday will also be options to suit up on Saturday.

Robertson is drawing motivation from Toronto's October schedule, which includes a game against the Dallas Stars and big brother Jason Robertson as well as a swing through his home state of California.

"If I make the team, we play Dallas and then we make a nice little trip to Cali, so those games are definitely on my calendar," Robertson said. "Hopefully I can make the team and play in those games."

The Robertson brothers faced off for the first time in the NHL last season with Toronto winning 4-0 on March 15.

There's no doubt who will be handling the bill if the brothers meet up for a bite ahead of the Stars game in Toronto on Oct. 20. Nick joked that Jason will be paying for "every dinner from now on" after signing a four-year, $31-million deal with Dallas.

Robertson's shot is dangerous for the opposition and, at times, his own teammates. Defenceman Victor Mete was struck by a Robertson shot just above the skate on his leg during special teams work on Friday morning.

"It's one of those funny shots that just gets you in the wrong spot," noted Keefe.

Mete is considered a game-time decision.

"He's obviously a little sore, but he's going to travel with us, and we'll monitor him throughout the day and hope he'll be able to play," Keefe said. "It's an important game for him."

William Villeneuve will draw in if Mete can't play.

Toronto's defensive depth is already being tested this season. Timothy Liljegren is expected to miss the first month following hernia surgery. Jordie Benn will miss the start of the season with a groin injury while Carl Dahlstrom will be sidelined six months following shoulder surgery.

The good news is Rasmus Sandin is ready to go. The 22-year-old defenceman will play on Friday for the first time since signing with the Leafs on Sept. 29. It will be his first game of any kind since March 19 when he sustained a knee injury in Nashville.

What will it be like to jump from practices to a game?

"It's going to very fun to see the difference," the Swede said. "I mean, I don’t even know the difference because I haven’t played in so long … Hopefully it's not that big of an adjustment."

After four full practices, the sense is Sandin is up to speed.

"When he came in, he had to do all his fitness testing and most of us got to watch him do it and he crushed it," said Murray. "So, he's obviously in incredibly good shape."

"It's been going very well," Sandin said. "The first couple practices were a little bit tough with my hands, but tempo-wise I've been doing pretty well."

"He's looked like himself," said Keefe. "He looks confident with the puck. We've gotten him more reps on the power play, which he'll get again here tonight. We'll be relying on him a lot in all situations in a game like this. He and Mete are the most experienced guys that we have to play tonight [on defence]. He'll be leaned on a lot."

Sandin, a lefty, will start the season on the right side. He's played his off side in a couple games in the NHL, but those were one offs. He's been skating on the right since arriving back in camp.

"Getting a couple reps every single practice is great," Sandin said. "It's not something you get used to really, really quick. For me, it’s a little bit of an adjustment so it's helped a lot."

Sandin will also be looking to show off some newfound strength. He added 16 pounds to his 5-foot-11 frame over the summer. How will that help him?

"Winning battles down in the corners, in front of the net, stuff like that," the now 194-pounder predicted. "It's also helped me in my skating as well with getting a little more power in every single stride."

Wayne Simmonds has found himself in an unfamiliar position at this year's camp.

"A little bit different for me, obviously," the gritty winger acknowledged. "I'm kind of on the bubble here and I know that. Kind of battling for a job. You got to put that to the back of your mind and come out and do everything the right way."

Simmonds tried to add some quickness during the summer and feels an additional "pop" in his legs so far at camp.

"I feel pretty good about my game," he said. "As I've been saying all along, just keep working my butt off and let the cards fall where they may."

"He's done a good job both in his effort and his execution," said Keefe, "and his attitude and how he's handled it, knowing he was in a battle here, not unlike the way he was in a battle to get in the lineup towards the end of last season. He's been a true professional in that sense. He's still competing and there's still time to go here. The players performances will have a say in how this all shakes out. The salary cap is going to have its say on how it all shakes out and injuries and such. So, there's a lot of things that can happen here in the next little bit."

Simmonds has never been sent to the minors since breaking into the NHL during the 2008-09 season.

"I honestly think this is the deepest team I've ever been a part of," the 34-year-old said. "Even if you were to add a fifth line to our team, I think that line would do pretty well playing up against anybody. It's pretty impressive."

"The competition this year is more competitive than I've seen in any other year," Keefe said. "Simmer is caught in that mix."

Defenceman Justin Holl missed Friday's practice due to a suspected case of food poisoning, per Keefe.