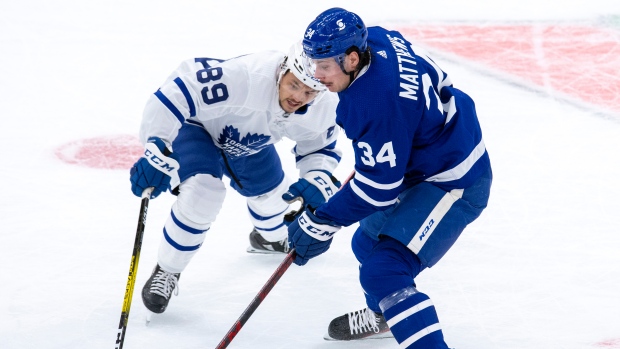 TSN Toronto Reporter Mark Masters reports on the Maple Leafs, who practised at the Ford Performance Centre on Tuesday ahead of Wednesday night’s 2020-21 season opener against the Montreal Canadiens.

Auston Matthews is one of only four players in National Hockey League history to begin his career by scoring in his team's season-opening game four straight times.

"He comes in extremely well prepared and comes out of the gates hot," observed teammate John Tavares. "He expects a lot out of himself, wants to be a great player in th​is league and is such a driving force for us."

Matthews, who has scored 12 goals in 14 career games against the Habs, spent the off-season slimming down. He weighed in at 211 pounds at training camp after finishing last year at 224. The Athletic's James Mirtle reports that Matthews linked up with trainer Ian Mack, who also works with Patrick Kane, to see how he could add some more flexibility and agility to his game.

"I'm really happy with how the off-season went," Matthews said after Tuesday's practice. "I've been feeling really good on the ice, feeling really good off the ice and just trying to manage that and make sure every day I'm ready to come to the rink and prepare myself to play."

As part of the new off-season routine, Matthews changed his diet although he insists it was "nothing too crazy."

"He continues to fine tune his game whether it's on the ice or off it," marvelled Tavares. "He's continuing to find ways to improve, it’s hard to believe. The sky's the limit for him."

Matthews scored 47 goals in 70 games last season, finishing one behind Washington's Alex Ovechkin and Boston's David Pastrnak for tops in the league. So, the Rocket Richard Trophy is certainly within reach for the 6-foot-3 centre, but teammates and coach Sheldon Keefe seem more enthused by how Matthews has developed his defensive game.

"I enjoy seeing what he does in the other end, but this year he wants to take another step and improve and play both ends as good as possible," said goalie Frederik Andersen.

It was last March, just before the pandemic pause, that team president Brendan Shanahan set a high bar for Matthews calling him "​one of those rare players who has the ability to lead a league in scoring and also be its best defensive player."

In a media session on Tuesday, Shanahan highlighted the 23-year-old's determination to become a two-way force.

"He's taken a real interest in becoming, as they say, a 200-foot player, a complete player that is the kind of player you can put on in any situation. I like the fact we're introducing or Sheldon is introducing penalty killing to his game. It's a great message to your team that your best players are not only expected to score goals, but defend as well."

The Leafs allowed 3.17 goals per game last season, which ranked 26th in the league, so playing better defensively is key if the group is going to take a step forward.

"With the pieces we've brought in, I feel we checked some boxes to get a little harder on the back end and keeping guys away from our net," said veteran defenceman Jake Muzzin.

The front of the net will be a focal point in Wednesday's showdown with a Canadiens team that has added Joel Edmundson and Alexander Romanov to an already impressive defensive core.

"They have a big top four, which is going to be a challenge for us to get to the net and work around that," Muzzin added.

Keefe pointed out that Montreal was already strong at protecting the house last season.

"Even without the additions they've made, no team won the net-fronts as well as Montreal did in terms of keeping people away from their net and controlling rebound situations and winning rebounds and getting loose pucks at the opposition's net," Keefe said. "We think we have beefed up as well if you look at some of our additions. We are a bigger, stronger team at the same time. I think we are well suited to adapt to however the games are going to go."

With no pre-season games, Muzzin admits it may take time to get Keefe's structure and system down pat, especially with several new faces in key roles, but other teams are in the same boat. There will be no excuses, especially after how last year played out.

The Leafs will also be counting on a bounce-back season from Andersen, who finished with a .909 save percentage last year. In an interview in November, Keefe outlined the reasons why he believes the goalie will be better.

"First thing is just that he's a very good goaltender," Keefe told TSN. "He's established himself among the top goalies in the NHL and we really believe in him. We believe we have a part to play in front of him and can do a much better job, from coaching staff right on through the players. We think we'll get better there and that's going to help give him that support. Of course, having the additional depth around him that we've added to with Jack Campbell and Aaron Dell as well, that's going to help. But then, the big thing is, I know he's motivated to have that bounce back. He knows he's capable of more."

Andersen, who is playing in the final year of his contract, was asked what constitutes a successful regular season for him.

"That's a good question," he said. "It's something I don't care about right now. The only focus is what's at hand right now. Staying in the moment is my only goal right now. All these other questions are really just distractions."

The task at hand is a date with the Canadiens, who won all three games against the Leafs last season. However, on all three occasions Toronto was playing on consecutive nights so Andersen actually didn't see Montreal last year.

Andersen is 6-0-1 in the last three seasons against the Canadiens, with the only loss coming in a meaningless regular-season finale at the end of the 2018-19 campaign.

​Tavares was more forthcoming than Andersen when asked what a successful season looks like for him.

"I want to play at an elite level," the Leafs captain said. "I want to be an elite player so being very consistent in all areas of the game and contributing in many different ways. I want to be very difficult to play against and make the people around me better."

Tavares lamented the fact that his game was a bit up and down last year, which was also an issue that hampered the team.

"Through my first two years we've had some tremendous stretches of hockey," Tavares said. "We've been tops across the league in terms of points earned, points percentage and many categories statistically, but our ability to sustain that and be able to win the division and win home-ice advantage, we haven't been able to accomplish that."

Tavares echoed the sentiments of Muzzin, suggesting the Leafs need to be tougher to play against and maintain a higher baseline performance level.

"The division is extremely competitive," Tavares said. "It's going to be a battle every day so it's about finding ways to adapt and be consistent in how we handle adversity."

The Leafs will join the six other Canadian clubs in the North Division this season.

Lines at Leafs practice on Tuesday: