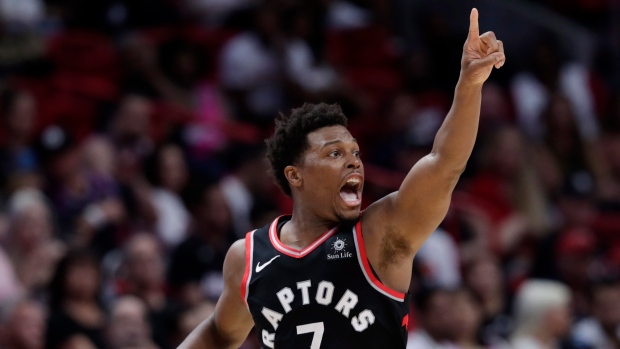 TORONTO – Kyle Lowry and the Toronto Raptors were never supposed to come this far together.

The Raptors traded for Lowry, then a 26-year-old journeyman, in 2012. Admittedly, he expected his time in Toronto to be brief. He didn’t even bother getting to know his teammates in that first year.

After a disappointing debut season, Masai Ujiri tried to trade him to the Knicks, and very nearly succeeded. They’ve shopped Lowry several times since then, including ahead of last February’s trade deadline, and he’s contemplated leaving as a free agent on a couple of occasions.

Their relationship is a complicated one. They haven’t always seen eye to eye or even gotten along, but that’s okay. They’ve needed each other. They’ve brought out the best in each other.

The Raptors wouldn’t be a perennial Eastern Conference power and the reigning NBA champions without Lowry, and Lowry wouldn’t be a five-time all-star, franchise icon and borderline Hall of Fame candidate without the Raptors. They’ll forever be tied to one another – arguably the best and most important player in franchise history and the organization he’s become synonymous with.

They’ve accomplished a lot together, but they’re not done yet. Lowry and the Raptors have agreed on a one-year, $31 million contract extension, according to ESPN’s Adrian Wojnarowski.

“Kyle has an incredible legacy here that I think we all have underrated,” Ujiri said on media day a couple of weeks ago. “We’ve had our ups and downs and bumps and grinds, but the inner core of who he is as a player and what he’s done with this franchise, he definitely deserves that. There’s legacy status for him in my opinion.”

“We can say whatever we want about Kyle: He comes and he gives it his all on the court. He’ll give me a headache once a month, but that’s fine. That’s our relationship. I really respect him for that. We’ll always pay Kyle that respect. What he’s done for this city, for this ball club, is remarkable.”

It’s a win-win for player and team.

Lowry was going into the final year of his deal but had made his intentions clear: he wanted to remain in Toronto. While he and his representatives likely would have preferred a longer term, his new deal will keep him with the Raptors through the 2020-21 season and pay him $64 million over the next two years – not bad for a player who will turn 34 in March.

However, this is more than just a reward for his years of service and effort in delivering the team its first title. Despite his age, Lowry is still a productive player and one of the most valuable point guards in the league.

The Raptors may not be contenders without Kawhi Leonard, but as long as Lowry is healthy and on the court they’re sure to be among the top teams in the East. There had been some speculation that Toronto could look to trade Lowry’s expiring contract ahead of February’s trade deadline and pivot to a rebuild, but his extension signifies a desire to remain competitive, even in the post-Leonard era.

From the Raptors side of things, a one-year extension allows them to maintain their coveted long-term flexibility.

Had the Raptors allowed Lowry’s deal to expire next summer – in addition to Marc Gasol, Serge Ibaka and Fred VanVleet – they would have had more than $90 million coming off their books. However, the free agent class in the summer of 2020 is expected to be underwhelming.

By extending Lowry a year, they will defer much of that cap space to the summer of 2021 when several marquee players could become available, including Bucks superstar and reigning NBA MVP Giannis Antetokounmpo, who Ujiri is known to be infatuated with.

If they hope to recruit Antetokounmpo, or any other big-name free agent, this was an important and necessary step: continue to build a winning culture while taking care of a well-regarded player who has bled for the franchise, literally in many cases.

The new deal also provides Lowry and the Raptors some stability going into a season of uncertainty.

Toronto is only the third team in NBA history to try and defend its championship without the reigning Finals MVP on its roster, and the first team to do it with said Finals MVP on somebody else’s roster.

While Lowry, Gasol and Ibaka still bring a veteran presence, much of this season will be about turning things over to the young guys – Pascal Siakam and OG Anunoby, in particular.

Siakam is also eligible for an extension prior to the season. He and the Raptors have until Oct. 21 to agree on a new deal or he’ll become a restricted free agent next summer. As TSN first reported last month, talks are ongoing and both sides are hopeful that they can get something done, but nothing is imminent. Whether they extend him this fall or wait to re-sign him over the summer, the Raptors have every intention of keeping Siakam in Toronto.

Playing alongside Leonard and an emerging Siakam last year, Lowry settled into more of a complementary role, averaging a career-best 8.7 assists in his 13th season. Having Lowry around should help take some of the pressure off Siakam as he transitions into his expanded and more featured role.

Fittingly, Lowry will now be the bridge between the most successful run in the Raptors’ 25-year history – six straight playoff appearances and their first NBA championship – and whatever comes next. ​