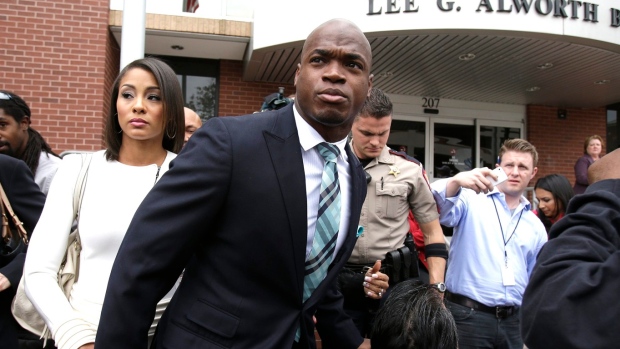 The NFLPA has filed grievances on behalf of Adrian Peterson and Ray Rice.

How will this all shake out? Here are your takeaways.

That same agreement provided that the NFL could discipline Peterson after he was removed from the Exempt List. So the league was reserving its right to suspend and/or fine Peterson, once reinstated.

On November 4, the criminal proceedings came to an end when Peterson pleaded no contest to beating his four-year-old son. So for the NFLPA, that event should have triggered Peterson's reinstatement.

So the NFLPA, on Sunday, filed a grievance against the league with a view to having Peterson reinstated. The hearing will be heard on Monday, November 17 and a decision will be rendered by arbitrator Shyam Das by Saturday November 22.

By the way, this is the same Shyam Das that overturned Ryan Braun's positive drug test on the basis that protocol wasn't followed in the collection of Braun's urine sample (which included elevated levels of testosterone).

Based upon the agreement between the NFL and NFLPA, there's a good chance that Das will rule that Peterson should be reinstated. Even if that happens, though, it doesn't mean Peterson will suit up Week 12 against the Packers.

Even if reinstated, the NFL could still turn around and suspend Peterson. Remember, that option was part of the deal. If Peterson is suspended, expect the NFLPA to file another grievance, arguing that the nine games Peterson has already missed should be counted as his suspension, and that it already exceeds that the NFL's new domestic violence policy (incorporated into the Personal Conduct Policy), which calls for a minimum 6-game suspension.

So from the NFLPA's standpoint, the appropriate punishment would be to fine Peterson for six games (since he was paid while suspended) and reactivate him. Any further suspension would be inappropriate.

Another possible outcome is the NFL reinstating Peterson, electing not to suspend him and returning him to the Vikings. At that point, the Vikings would have the option of either cutting Peterson or activating him. They could also suspend him for a couple of games, but that seems unlikely.

There is no doubt that Ray Rice changed everything. As well, there is photographic evidence circulating online of the harm inflicted by Peterson on his son. The NFL is proceeding carefully to ensure that whatever it elects to do with Peterson is aligned with the public's sensibilities and expectations. Part of that means talking to business partners, like regional sponsors, national sponsors and television networks, to gauge their reaction to Peterson's reinstatement.

So in part, this is a business decision for the league as it looks to avoid further harm being caused to its reputation and goodwill.

The NFLPA has filed two grievances on behalf of Ray Rice following his indefinite suspension for the appalling abuse of his wife, Janay Palmer-Rice.

The first grievance is against the NFL and seeks to have Rice reinstated from his indefinite suspension. Remember, the NFL increased Rice's suspension from two games to indefinite when a second video surfaced of Rice delivering a left cross.

The NFLPA has argued that Rice was punished twice for the same incident, which is against the rules. On the other hand, the NFL has taken the position that Rice's account of what happened was ambiguous and that it never saw the video before suspending Rice for two games. However, when it saw the video, that constituted something new, thereby justifying new discipline.

Ultimately, this case will turn on whether Rice clearly conveyed the severity of the incident to Goodell. As well, the arbitrator, retired Federal Judge Barbara Jones, will determine if the indefinite suspension should be overturned on the basis that the NFL should have seen the video the first time around since it was apparently available. Jones is a Democratic appointee, so she may be more likely to side with the employee.

The second grievance was filed by the NFLPA against the Ravens. In that case, Rice is not asking to be put back on the team. Remember, the Ravens cut him. Rice just wants to be paid the $3.52 million he feels he's owned.

Here's the problem for Rice: even if he wins his grievance against the NFL and is reinstated, that doesn't mean he'll suit up this season – or ever.

The Ravens cut him so he will need to sign with another team. While at 27-years old he still has some productive years ahead, he's also toxic. If a team signs Rice, it risks alienating its regional sponsors and fan base, while the league could see a backlash from its national sponsors and media partners.

So don't expect to see Rice play this season. And frankly, he may well be done.

If you were running an NFL team, would you sign Ray Rice? That's what teams are asking themselves.