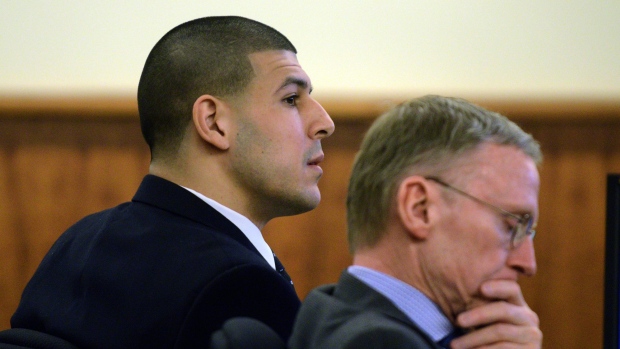 "I felt like I wanted to go into that hole with my son," said Ursala Ward, mother of Odin Lloyd. "I miss my baby boy Odin so much. But I know I will see him again someday. And that gives me the strength to go on."

Despite not having a witness, murder weapon or motive, a jury has found Aaron Hernandez guilty of first degree murder in the execution of Lloyd by reason of 'extreme cruelty and atrocity".

Under Massachusetts law, one way to make a finding of first degree murder is showing that a defendant killed someone with "extreme atrocity and cruelty". This means that a victim's death was brutal or savage.

Various factors that juries consider when looking at "extreme atrocity and cruelty" include how much the victim suffered, the defendant's disregard for that suffering, the degree of the victim's injuries and how many times the victim was shot or harmed.

Lloyd was shot six times at close range with a Glock .45-caliber pistol, with the first shot hitting him in the back. As one jury said after the verdict was delivered, "the shots... there were six of them. That's extreme".

As a result of being convicted of first degree murder, Hernandez was immediately sentenced to life in prison with no chance of parole. Judge Susan Garsh has no discretion on the matter; the law calls for this type of prison sentence. Hernandez was also found guilty on five gun and ammunition charges.

Some believe that the longer a jury takes to deliberate, the better chance there is of a hung or deadlocked jury. If that occurs, a mistrial is declared and the prosecution then looks at potentially having the case retried. Here, the jury deliberated for seven days. There was some concern that they may have been deadlocked on whether Hernandez murdered Lloyd. While that is possible, today's verdict suggests a different story. It is more likely that the jurors may have disagreed on the degree of murder to be assigned rather than disagreeing outright on guilt. Apart from first degree murder, the jurors also had the option of finding Hernandez guilty of second degree murder, which calls for life in prison with the chance of parole after 15 years. As well, don't forget that this trial had over 100 witnesses and was over two months long. The jury had a lot to consider.

Here's some of the evidence relied on by the prosecution:

There was a series of text messages on the day of the murder between Hernandez and Lloyd. Hernandez first texted Lloyd at 9:05pm indicating that he was going to drop by and pick him up. The exchange ends with Lloyd texting Hernandez at 12:22am asking if "we still on?". This exchange is important because it begins to place Hernandez and Lloyd together on the night of the crime.

The jurors also found the video surveillance footage to be quite convincing. On the night of the murder, there is footage of Hernandez, Ernest Wallace and Carlos Ortiz in a Nissan Altima rented to Hernandez. There is also footage of that same Nissan Altima pulling up to Lloyd's home at 2:33am to pick him up. There is also video surveillance footage from Hernandez's own home that shows him returning without Lloyd.

(Wallace and Ortiz participated in the murder of Lloyd and both are facing their own criminal charges related to Lloyd's death.)

Tire tracks from Hernandez's rental car were also found at the crime scene. As well, there were footwear impressions at the crime scene that matched a size 13 Nike Air Jordan Retro 11 shoe. There were only 90,000 pairs of that shoe made and only a fraction were in Hernandez's shoe size. There was also video surveillance from the gas station confirming that Hernandez was wearing those shoes the night of the murder. The shoes, by the way, were never found.

So this evidence, when considered as a whole, constitutes persuasive evidence that Hernandez was at the crime scene.

The same .45 shell casings that were found at the crime scene were also found in the Nissan Altima rented to Hernandez. As well, a .22-caliber gun was found near the murder scene. The gun was not used to commit the murder, but was registered to Hernandez.

There is also video evidence of Hernandez in his own home after the murder holding what is arguably a .45-caliber gun.

Shayanna Jenkins testified that her fiancée Hernandez told her to retrieve a box from his basement and throw it away. She told the court she was unaware of the contents of the box, dropped it in a garbage bag and disposed of it in a "random dumpster". She was also caught on video holding the box. The prosecution believed that the murder weapon was in that box.

At the direction of Hernandez (who was being questioned by police at the time), Jenkins delivered $500 in the middle of the night to Wallace, who was parked in a McDonald's parking lot in Rhode Island. Jurors must have been left wondering if the money was buying Wallace's silence or was being used to help Wallace flee.

The bottom line is the testimony of Jenkins hurt Hernandez as it lacked credibility and veracity, while also raising questions as to why Hernandez was seemingly in a hurry to pay Wallace.

You can't lie to Patriots owner Robert Kraft in the state of Massachusetts and get away with it. This is the man that prevented the Patriots from moving to St. Louis. Kraft testified that Hernandez denied killing Lloyd, saying instead he was at a night club when Lloyd was murdered. Based upon the video surveillance evidence, it's clear Hernandez was not telling Kraft the truth.

Evidence emerged that Hernandez attempted to destroy the surveillance equipment in his own home. That's unusual.

As well, while the defence team characterized Hernandez and Lloyd as good friends, Hernandez did not appear shaken by the death of Lloyd. The next day Hernandez, Wallace and Ortiz hung out by Hernandez's pool drinking smoothies. Also noteworthy is that Hernandez never contacted Lloyd's family to express his condolences.

Hernandez's lawyer, Sultan, argued there was no motive, no murder weapon or witness to the murder of Lloyd. He also described law enforcement's handling of the crime scene as inept and resulting in contamination.

A key to Sultan's defence was characterizing Lloyd and Hernandez as good friends. Why, on earth, would Hernandez ever kill his good friend? They were dating sisters. This was an attempt to capitalize on the lack of motive.

While highly risky, there was a legal basis for this somewhat astonishing admission. Under Massachusetts law, a co-conspirator who is found to have a shared intent to kill someone can be convicted of murder even if he did not pull the trigger; it can be enough to be at the crime scene sharing an intent to kill.

The alternative for Sultan would have been to stay the course, not admit that Hernandez was at the crime scene and continue to focus on no one knowing what happened that night with any degree of certainty. Would that have been successful? We may never know.

Next up is an appeal. In Massachusetts, a first degree murder conviction results in an automatic appeal to the state Supreme Judicial Court. That being said, it doesn't mean Hernandez will be successful on appeal. His lawyers will need to argue that one or more errors of law were made, and on that basis, the verdict should be set aside. These types of errors would include things like Judge Garsh letting the jury see evidence that should have been properly excluded. Appeals are rarely overturned and there is no reason to believe that this appeal will be successful.

One more thing – he's facing a double murder charge for the deaths of Daniel de Abreu and Safiro Furtado. And unlike the Lloyd case, there is a murder weapon, a motive and a witness.

All this means that Hernandez is likely to die in prison.