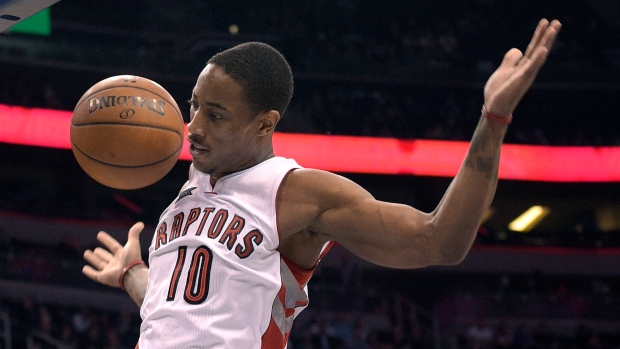 Born in Switzerland and raised in Belgium, Vucevic had been in the U.S. for just over a year and spoke very little English as he and DeRozan began their freshman season - DeRozan's lone season - at the University of Southern California.

"When he was at SC, he was young," DeRozan said of seven-footer. "He was coming over, just learning the game. Everything was so new to him."

But was he any good?

Vucevic missed the first eight games that year, waiting to have his amateur status confirmed by the NCAA. Logging just 11 minutes per game the rest of the season, he averaged just 2.6 points and 2.7 rebounds.

Meanwhile, DeRozan went on to star for the Trojans, alongside Bulls forward Taj Gibson. The Raptors would draft DeRozan ninth overall that coming summer. Vucevic entered the league two years later, a 16th overall pick by Philadelphia, later flipped to the Magic in a four-team deal that included Dwight Howard, Andre Iguodala and Andrew Bynum. Again, he was an afterthought.

On Saturday they squared off in Orlando. Faces of their respective teams. Two teams going in opposite directions. DeRozan, an All-Star. Vucevic, still a couple years behind, a budding star and the recipient of a brand new four-year, $53 million contract extension.

Vucevic threw the first punch, scoring six of his team's first 11. One of the premier rebounders in the NBA, the 24-year-old has diversified his game. His first bucket was a smooth 15-foot jumper. He followed it up with a put-back layup and a dunk.

By the time intermission rolled around, Vucevic had his Magic were ahead by three, shooting a sparkling 52 per cent. He had the Raptors on the ropes.

What did Dwane Casey have to say at halftime?

"I can’t repeat it," he said after the game. "But it was one of those things where we had to remind them: If we’re serious about being a playoff team you come out and have a serious, business-like approach each and every night. I don’t care if you’re playing a junior high team, you come out and perform."

On the back of DeRozan, the Raptors scored 38 points in the third quarter. Their All-Star guard poured in half of his game-high 26 points.

"I knew I was bigger than [Evan Fournier] and I knew I could get in the post," he said following his team's decisive 109-95 win Saturday. "As long as I could get my shot off I feel like every shot I take will be a good shot, and I was just trying to take advantage of that."

Bouncing back from a 4-of-16 performance in Wednesday's opener, DeRozan took control. He was responsible for 10 of Toronto's impressive 48 free-throw attempts, logging just 29 minutes in the contest. His crafty up and under move put the Raptors up by 10, their largest lead at the time, with just under three minutes left and they never looked back.

"DeMar did a heckuva job in the post against Fournier," Casey said. "And that was the difference in the ball game."

As per usual, Vucevic was quietly dominant. He finished with a double-double of 15 points and 12 rebounds before fouling out late in the fourth. He was frustrated, but such is life for the emerging star.

His Magic have now dropped eight straight to the suddenly red-hot Raptors, yet to break 100 points in any of those meetings. They've started the season 0-3 for the first time in nine years.

On the other end of the spectrum you have DeRozan's Raptors. 2-0 for the first time since 2008, the year DeRozan and Vucevic shared the court at USC.

Even for those with the immense talent and good fortune required to play basketball at the highest level, it's not everyday you come face-to-face with a legend in the sport.

Shortly after the Raptors arrived in Orlando Friday afternoon, players were surprised to learn that Oscar Robertson, Hall-of-Famer and one of the all-time greats, would be a guest speaker at their team meeting.

Setup by senior consultant Wayne Embry, also an NBA icon and longtime friend of the Big O, the historical significance of this meet and greet was not lost on Casey's young team, despite the fact that none of his players were alive to watch Robertson play live.

"That's the great thing about the computer," said the Raptors' coach. "We have some students of the game. We have some sharp young man from that standpoint. They weren't around to see him play and most of their parents probably barely saw him play, but he's the history of the league and before you can go forward you gotta know what came behind you. I'm always preaching that and that was a good example."

"It's always great talking to one of them legends, one of them pioneers that shaped the way the league is today," said DeRozan, who admitted he was a bit starstruck after meeting Robertson for the first time. "It was just great to hear from him, ask him a couple questions and get his input on playing back then and how much the game has changed. So you definitely gain more of an appreciation for the love of basketball."

Robertson, 75, is a 12-time All-Star, an MVP and NBA champion. His 14-year career came to an end in 1974. He averaged a triple-double in his second season, hovering around one throughout most of his time in the league.

"Here's a man that was 6-foot-5," Casey said of Robertson, who attended Saturday's game, in town to promote prostate cancer awareness. "He was LeBron-size back in the day, before weight training was big and did a lot of the same things. We just didn't see a lot of it. [The players] were in awe of how big he was, how he spoke about competing, how he spoke about being a good teammate and doing things as a team."

"When he throws out the names of players that he played with it definitely gives you goosebumps," DeRozan said. "Guys who came way before we did. We've got to appreciate them. They played in a different era and they played in a lot worse conditions than us. Sometimes we forget about what they went through, with all the luxuries we have now and everything. So it's definitely, definitely humbling when you talk to somebody like that."

Robertson and Embry were teammates in Cincinnati before Embry became a general manager and signed Robertson to the largest contract of his playing career with the Bucks.

"That was a lot of history sitting in the room last night," Casey said. "I hope the players took a lot out of."