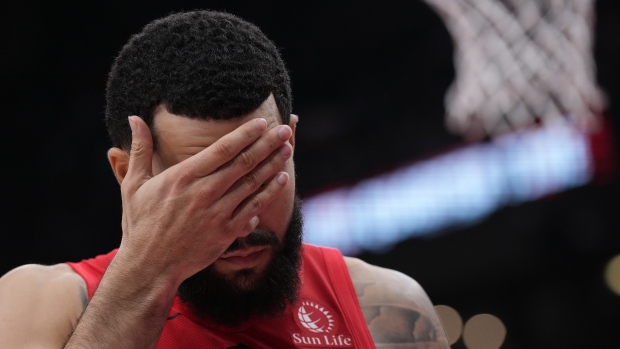 TORONTO – In a time-honoured tradition that precedes all meetings between the Raptors and Celtics, both head coaches used the bulk of their pre-game media availabilities to say nice things about the other team.

Some of it is probably genuine, but most falls into the category of killing your opponent with kindness. Boston’s former head coach turned executive Brad Stevens was truly elite at this, but Joe Mazzulla – who took over for the suspended Ime Udoka this season – is catching on quickly.

“I look at the challenge that Toronto presents in their physicality and their active hands and their ability to turn you over and their ability to be physical on the offensive end,” Mazzulla said ahead of his club’s 116-110 win at Scotiabank Arena on Monday night. “They can play and win a lot of different ways.”

That’s where he may have gotten carried away in his praise of the enemy. Can the Raptors really win a lot of different ways?

The Raptors know who they are, which is more than you can say about most clubs a quarter of the way into the season. They have an established identity and preferred style of play. But what happens when, for one reason or another, they’re forced to play outside of their comfort zone? As it stands right now, they’re mostly a one-note team.

Just ahead of tip-off, Raptors coach Nick Nurse called Monday’s contest a “measuring game,” a chance to see how they stack up next to the NBA’s best team. As far as early-December regular-season games go, this one had a little bit more juice to it, and Nurse approached it as such, using a tight eight-man rotation.

For most of the night, his team went toe to toe with the 20-5 Celtics. It was a commendable effort and an entertaining game, but in the end, the Raptors didn’t learn anything that they wouldn’t have already known about themselves.

When they’re playing their game, like they did during an impressive first half and then again in a late fourth-quarter run, they can hang with anybody in the league. We’ve seen what that looks like – flying around defensively, creating turnovers, getting out in transition, crashing the offensive glass and generally dominating the possession game.

But when they’re not doing those things at a high level, well, we’ve seen what that looks like too, most recently in a pair of embarrassing losses to New Orleans and Brooklyn or in the third quarter against Boston.

The Raptors essentially played the opening quarter to a draw and then won the second and fourth frames decisively. The difference was in that third quarter, when the Celtics committed only one turnover, shut down Toronto’s transition game, took advantage of some defensive miscues, and outscored their hosts 35-18.

It’s been a bumpy start to the campaign, and this was yet another reminder of how fast the pendulum can swing for a young team still trying to find some consistency. It’s almost impossible to know which version of this Raptors club will show up on any given night. It can change quarter to quarter or even minute to minute, as we saw again on Monday. That they’re 12-12 through 24 games seems appropriate in that sense.

The hardest part is already done. They know how they have to play in order to be at their best. The next step, as they try to close the sizeable gap between them and elite teams like Boston, is to sustain that level of play for longer stretches. Becoming a bit more diverse in the way they’re able to play couldn’t hurt either. That’s what separates the good teams from the great ones. It’s what allows you to steal the win on a night when you’re not at your absolute best, like Boston did in Toronto this week.

“We’re not really where we need to be,” Fred VanVleet said following a Tuesday morning practice. “It’s not a bad place to be, we’ve just got to make that jump if we want to be a great team. I think we’re a really good team. I think we’ve got a lot of talent. We got good players, but there’s a level that you have to get to with consistency and execution and attention to detail. Those are things that we’re struggling [with] right now, and that’s why you see the lack of consistency. It’s hard to win every night in this league if you’re not going to be sharp and attentive. If you make too many mistakes, you beat yourself. We have to get to the point to where we’re not beating ourselves.”

Late-game execution was something that came up a lot as the Raptors watched the film of Monday’s loss and prepared to host reigning Western Conference Player of the Week Anthony Davis, LeBron James and the surging Los Angeles Lakers on Wednesday. So was shooting.

As badly as they fared in both of those areas against Boston, they gave themselves a chance to win, cutting a 13-point deficit down to five inside the final minute. Thanks to a series of unforced errors – bad turnovers, a missed layup and a few defensive breakdowns – they came up short. Their starters also went 5-for-21 from three-point range, with their two-best shooters, VanVleet and O.G. Anunoby, going 2-for-11. That’s difficult to overcome, especially against quality competition.

Their prolonged shooting slump is the single biggest reason why they’ve been so reliant on winning the possession battle every night. It’s simple math. If you’re not hitting your threes, you need to secure and maximize extra possessions in order to keep up with an opponent who is shooting well. On Monday, Boston hit three more threes than Toronto, but also attempted five more shots. That’s not a winning formula for this team.

After knocking down 39 per cent of their three-point attempts over the first eight games of the season, the Raptors are shooting 30 per cent over the past 16 contests. Only Charlotte has shot worse over that span. They are 3-6 when they’ve shot below 30 per cent from long distance, but on average, they attempted 13.3 more shots than their opponent in those three wins.

For them to improve as a three-point shooting team this season – they shot 35 per cent last year, good for 20th in the league – it was believed that Pascal Siakam and Scottie Barnes would need to take a step forward in that area. Strangely, they both have, even if those improvements have only been slight. And after an eight-game stretch in which Gary Trent Jr. shot 18 per cent from deep, he’s seemingly broken out of his funk and is shooting 44 per cent since his move to the bench last week.

So, why can’t they shoot? VanVleet and Anunoby, both 38 per cent career three-point shooters, are each shooting 34 per cent on a combined 12.8 attempts per game this season. Given their volume of shots and the lack of reliable shooters on the roster, much of it falls on them. Of course, Anunoby is having an incredible campaign in just about every other facet of the game, continuing to pad his All-Star and Defensive Player of the Year candidacy. VanVleet’s shooting slump has been more glaring.

Over his past four games, VanVleet has gone 5-for-28 from long range. The All-Star point guard has missed time due to a lingering illness. It’s certainly possible that he isn’t fully healthy, or more likely, that he’s still getting his conditioning and rhythm back. But there may be more to it.

According to Nurse, there’s a hitch in VanVleet’s shooting mechanics. Using Noah analytics, the shot-mapping tool that measures the arc and accuracy of a player’s jumper, they’ve determined that his release has been a bit off line. Normally when fatigue or an injury impacts a player’s release, it’s more common for the arc to be affected. It’s more unusual for a player with good mechanics to suddenly start shooting far left or far right, Nurse noted, but they’re working to correct it.

“Obviously, nobody wants them to go in more than me, trust me,” VanVleet said. “But it’s just the way it goes sometimes. You can’t get too high or too low with it. Just keep working and try to find ways to get better.

“It hasn’t been pretty out there for me, personally. So, just gotta go back to the drawing board and find ways to be successful. And I’ll do that. I’m not concerned about it.”

Even though teams are defending VanVleet differently, putting more pressure on him to take contested shots, both he and Nurse said they’re happy with where the vast majority of his looks are coming from. The seven-year vet has never shot below 36 per cent from three in a full season. It’s not just that he’s a great shooter. Historically, he’s also been a consistently great shooter, so you have to figure he’s due for some positive regression.

For the Raptors to compete with the likes of Boston and become a team that’s capable of winning games in different ways, they’re going to need some of those shots to start falling.