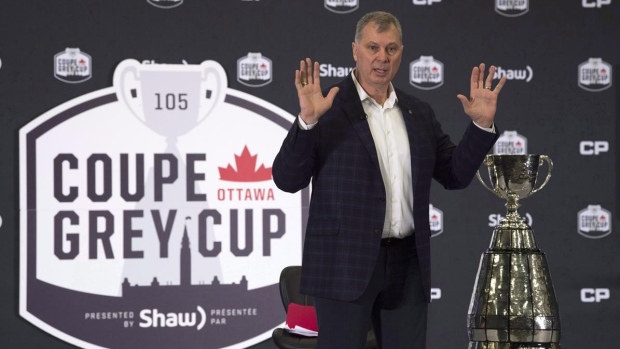 These are some interesting times in the Canadian Football League.

That’s saying something for a league that has endured more than its share of drama over the years.

In truth, the past 10-15 years represent a period of relative stability for the league, which has moved beyond its days of franchises going belly up to one of sustainability and comfort in its own skin.

But that relative calm is about to give way to a wave of challenges and opportunities that will test the league’s leadership and have a significant impact on its future.

Randy Ambrosie has been CFL commissioner for 16 months. He’s popular with the fans and the media and apparently well-supported by his board of governors, a distinction few commissioners have enjoyed for very long over the years.

He’s going need that kind of backing in order to steer the league through some considerable obstacles and capitalize on potential opportunities.

The first of those is what Ambrosie is calling CFL 2.0, a vision where the league serves as the catalyst for the growth of football internationally, reaching out to leagues and federations beyond Canada and the U.S. to create alliances that could result in Canadian players developing overseas or the best foreign players coming to Canada.

Ambrosie can imagine a world where the CFL has multiple international broadcast contracts, perhaps as one of his driving forces to meet his goal of doubling the league’s revenues.

In fact, at Friday morning’s commissioner’s State of the League address, the league is expected to sign a letter of intent to partner in a broad way with the professional league of Mexico, which could include CFL games being played in Mexico.

How that all turns into good business for the CFL’s bottom line isn’t clear, but the governors didn’t hire a former Bay Street CEO for no reason.

The other opportunity for the league is Halifax, where a three-man ownership group is deep in negotiations with the province of Nova Scotia and the regional government to come up with models to finance the construction of a new $190 million stadium.

The East Coast Kitchen Party will announce the name of the prospective team – either Atlantic Schooners or Atlantic Storm – late on Friday, and the group is already looking to make its first football operations hire to advise on a draft formula and team building.

A Halifax team wouldn’t just complete the national map and potentially engage fans across Eastern Canada, it would also give the league two five-team divisions and allow it a balanced schedule of five games per week.

On the challenging side of the ledger is something called the American Alliance of Football, an eight-team U.S. – based league that will kick off its 10-week schedule the week after the Super Bowl. The AAF is loaded with NFL connections from the top down and is positioning itself to be the primary development league of the NFL.

Players will make a minimum of $70,000 (U.S.) – significantly more than the CFL minimum of $54,000 (Canadian) – plays a much shorter schedule and will allow players to step into the NFL at the end of any season.

If that sounds like serious competition for CFL player recruitment, it should. It’s scaring the heck out of general managers across the league who are concerned the CFL could be on its way to becoming third-rate pro. And it’s not just players. Rumours are already floating of members of CFL coaching staffs looking to migrate to the AAF, especially with the CFL introducing a coach’s salary cap.

There are those that are dismissing the threat of the AAF, but it was top of mind enough that CFL coach of the year Chris Jones brought it up on stage as a rallying point at Thursday’s CFL Awards Show.

Speaking of salary caps, the league will be speaking that language soon enough when it sits down with its players’ association to negotiate the next collective agreement, a process that could get nasty as the players dig in over issues of long-term health and safety.

No one believes a CFL work stoppage is possible, but it’s going to be Ambrosie’s challenge to sell the players on doing something to improve the business and the game that might not seem to be in their short-term interest.

And there are the eternal concerns about the largest market in the country, where neither the move to BMO Field nor the purchase by MLSE has done anything to improve the woeful attendance of the Toronto Argonauts.

When Ambrosie takes the stage for his Grey Cup address five years from now, his league is almost assuredly going to look very, very different.

What that really means all depends on how the commissioner navigates his vision and the CFL’s challenges between now and then.