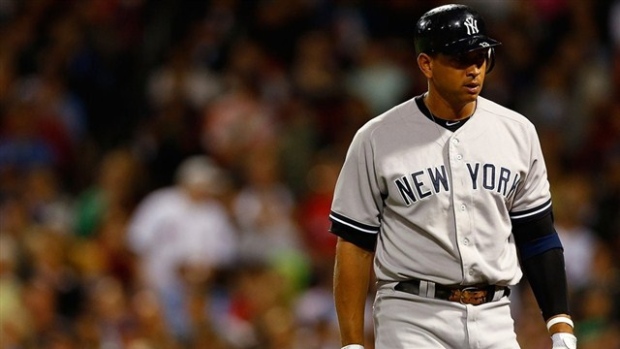 In news that is as shocking as an Arian Foster soft tissue injury, it was revealed this week that New York Yankee Alex Rodriguez has been lying about his ties to Biogenesis and using PEDs.

Writing for the Miami Herald, Jay Weaver is reporting that Rodriguez has admitted under oath to the Drug Enforcement Administration (DEA) that he used banned substances purchased from Biogenesis between 2010 and 2012.

“Yes, he bought performance-enhancing drugs from Biogenesis of America, paying roughly $12,000 a month over about two years to fake doctor Anthony Bosch,” wrote Weaver. “Yes, the Biogenesis owner gave him pre-filled syringes for hormone injections into his stomach, and even drew blood from him in the men’s room of a South Beach nightclub. And yes, Rodriguez’s cousin, Yuri Sucart, was his steroid go-fer.”

Rodriguez provided this information in the context of federal drug distribution charges facing his cousin Yuri Sucart. The DEA wanted evidence against Sucart and went to Rodriguez to get it. Ironically, it’s also been reported that Rodriguez paid Sucart nearly $1 million to keep quiet about his PED use. I’m guessing they aren’t that close anymore. In exchange for Rodriguez’s testimony against Sucart, the DEA granted the embattled Yankee immunity.

Just a couple of months before admitting to the DEA that he indeed cheated, an enraged Rodriguez went on Mike Francesa’s radio show on WFAN and denied taking PEDs.

Francesa: Were you guilty of any of these charges?

Rodriguez: No and I shouldn't serve one inning.

Francesa: Did you do anything wrong?

Francesa: Did you do any PEDs?

Francesa: Did you obstruct jus... anybody, any witnesses? Did you do anything that they accused you of doing?

Francesa: So you're guilty in your mind of nothing?

Rodriguez: I feel like I should be there opening day.

Perjury is a Funny Thing

Knowingly lying under oath is called perjury and it’s a crime. It’s a very serious charge and can include prison time. Just ask Marion Jones, who spent six months in jail for lying under oath.

So Rodriguez could declare publicly all he wanted that he didn’t do PEDs. However, when the DEA came calling and directed him to tell the whole truth and nothing but the truth, he had a strong incentive to be truthful. That’s why this summer I wrote that Rodriguez wasn’t out of the woods, and that the criminal charges against his cousin Sucart could ultimately end up exposing Rodriguez.

Yankees: Can They Void A-Rod’s Contract?

The Yankees owe Rodriguez $61 million over the next three years. That’s a lot for a player that turns 40 next June. When Rodriguez was suspended for 211 games by MLB for is use of PEDs, the Yankees certainly didn’t want anything to do with him. However, more recently, they seemed resigned to his return.

But what happens now? Could the Yankees void Rodriguez’s contract and cut him?

That would be very tough. There are simply too many hurdles to overcome. Of course, it doesn’t mean the Yankees can’t try. If they do, here are a few things they could rely on.

The team could allege breach of contract. The Yankees would look to Paragraph 7(b)(1) of his contract, which provides that a team can terminate a contract if a player "fails, refuses or neglects to conform his personal conduct to the standards of good citizenship and good sportsmanship or to keep himself in first-class physical condition or to obey the club's training rules." As well, Paragraph 7(b)(3) allows for termination if a player "fails, refuses or neglects to render his services hereunder or in any manner materially breach this contract."

Relying on these sections, the Yankees would argue that by doping, Rodriguez failed to “obey the club's training rule”. He also lied repeatedly about doing PEDs, and threw his team, union and the Commissioner under the bus not to mention obstructing MLB’s investigation. None of that is terribly polite and constitutes a breach of his player contract.

While not unreasonable, these arguments very likely wouldn’t be successful. Punishments for PED use are handled by the collectively bargained drug policy. That means that both baseball and the Major League Baseball Players Association (MLBPA) agreed the policy would govern punishments related to PEDs. That's why the drug policy is there in the first place. If the sides had agreed to tougher sanctions for PED use and put them in the drug policy, then those tougher sanctions would govern.

The Yankees could claim that Rodriguez misrepresented himself when he signed his contract. When Rodriguez signed his 10-year/$275 million contract in 2008, the Yankees would say they weren’t getting the player they thought they were getting. Rodriguez wasn’t being truthful about the nature of his abilities and how he achieved such a high level of success. The Yankees could argue that had they known Rodriguez was cheating they would not have signed him. Once again, though, the drug policy, is in place to deal with PED use, so this argument would be a real uphill battle for Yankees.

The Yankees could also allege that Rodriguez’s injuries (including his recent hip injury) are the result of his PED use. Good luck showing a direct link. This argument has little to no chance.

MLBPA Would Fight – And Probably Win

The MLBPA has a long history of being a strong advocate for its players and vigorously fighting punishments imposed on players. The MLBPA is widely considered as the strongest union in sports and one of the strongest unions on the planet. As a result, players have enjoyed strong success at arbitration when appealing voided contracts.

Here are some MLBPA wins:

1) In 1987, the San Diego Padres voided LaMarr Hoyt’s contract after he was jailed following multiple drug charges, including intent to distribute cocaine and attempting to smuggle drugs from Mexico into the U.S. This would seem to be specifically the type of conduct that would justify voiding a contract – right? Wrong. The Players Association filed a grievance and won.

2) In 2004, the Colorado Rockies tried to cut Denny Neagle after he was charged with soliciting a prostitute. The MLBPA stepped in, and ultimately the parties agreed to a payout of $16 million on his $19.5 million contract.

3) In 2005, the Baltimore Orioles voided Sidney Ponson’s contract for driving while intoxicated (as well as some other stuff). The MLBPA grieved, and the sides ended up settling. Ponson got a sizable chunk of his $11.2 million salary.

There was a case where an arbitrator upheld the voiding of a contract. In 2008, Shawn Chacon refused to leave the team dining room to speak with GM Ed Wade in his office. This confrontation ended with Chacon grabbing Wade by the neck and throwing him to the ground. Each time Wade tried to get up, Chacon knocked him back to the ground. Chacon’s contract was terminated with cause. The move was appealed by the MLBPA, but the appeal was unsuccessful.

So, short of strangling your employer, it can be tough to successfully terminate a contract (Latrell Sprewell got 68 games for choking NBA coach P. J. Carlesimo).

Rodriguez Has Already Been Punished

MLB already suspended Rodriguez for his PED use, links to Biogenesis and obstructing its investigation. As a result, MLB and the Yankees can’t punish him again for the same offences. Unless something new and dramatic comes to light, the discipline ship has sailed on the HMS A-Rod.

If the Yankees want Rodriguez gone, the team would need to buy him out. Realistically, that’s their most viable option.