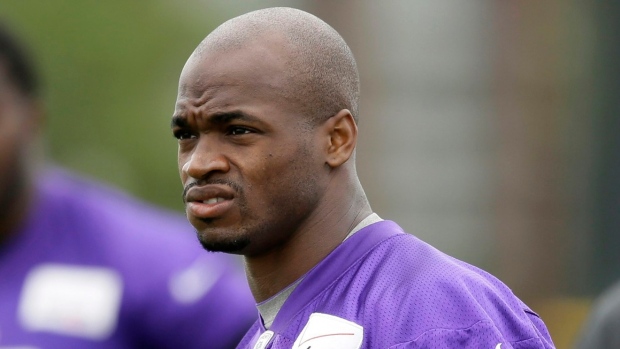 A tentative date of December 1 has been set for Minnesota Vikings running back Adrian Peterson to stand trial on a felony child abuse charge.

All along, Peterson has expressed he is not interested in cutting a deal and believes he did nothing wrong.

While he indicated to police that he felt bad in light of the extent of the injuries, he added "to be honest with you, I feel very confident with my actions because I know my intent" and he characterized the incident as a "normal whooping".

Peterson also maintained his innocence in a statement issued through his lawyer Rusty Hardin, saying, "I never ever intended to harm my son. I will say the same thing once I have my day in court."

If this goes to trial (which is not a guarantee if the sides can settle), it remains possible Peterson could be acquitted.

The criminal charge stems from a beating he gave his four-year-old son with a tree branch (or a switch) after Peterson's son pushed another child off of a motorbike video game. Peterson grabbed a tree branch, removed the leaves and struck his son repeatedly. According to CBS Houston's Nick Wright, the assault resulted "numerous injuries to the child, including cuts and bruises to the child's back, buttocks, ankles, legs and scrotum, along with defensive wounds to the child's hands."

"Peterson also allegedly said via text message to the child's mother that he "felt bad after the fact when I notice the switch was wrapping around hitting I (sic) thigh" and also acknowledged the injury to the child's scrotum in a text message, saying, "Got him in nuts once I noticed. But I felt so bad, n I'm all tearing that butt up when needed! I start putting them in timeout. N save the whooping for needed memories!"
In further text messages, Peterson allegedly said, "Never do I go overboard! But all my kids will know, hey daddy has the biggie heart but don't play no games when it comes to acting right."
According to police reports, the child, however, had a slightly different story, telling authorities that "Daddy Peterson hit me on my face." The child also expressed worry that Peterson would punch him in the face if the child reported the incident to authorities. He also said that he had been hit by a belt and that "there are a lot of belts in Daddy's closet." He added that Peterson put leaves in his mouth when he was being hit with the switch while his pants were down. The child told his mother that Peterson "likes belts and switches" and "has a whooping room."

As per Section 22.04 of the Texas Penal Code, Peterson was indicted on a charge of recklessly, or with criminal negligence, caused bodily injury to a child. This type of charge is classified as a "state jail felony" and is punishable by 180 days to two years in jail and/or a fine of up to $10,000.

"Reckless" defendants act with an awareness that their actions are likely to cause the crime but persist with their actions. In order to be characterized as "criminally negligent", it just needs to be shown that the defendant was not aware of the potential consequences but should have been.

The prosecution just needs to show either Peterson was reckless OR negligent. The latter is easier to establish since you don't need the element of 'awareness'.

Physical abuse in Texas is an accepted form of discipline. Section 261.001 of the Texas Family Code allows parents to engage in "reasonable discipline" of children so long as it does not "expose the child to a substantial risk of harm".

This may explain why it took the prosecution two attempts to get Peterson indicted.

Ultimately, Peterson was indicted because a grand jury believed that his conduct did not constitute "reasonable discipline" and ended up causing "substantial harm" to his child.

Peterson Could Walk At Trial

Based upon the merits of the case and the relatively low legal standard of negligence to be met, the prosecution has a strong case. The injuries inflicted certainly cross the line and constitute substantial harm. As well, while Peterson may not have intended to harm his son, he should have known those injuries were likely. Bottom line: the harm was bad and Peterson, at the very least, was negligent.

That doesn't mean, however, the prosecution is going to win. It's entirely possible that Peterson could walk.

To find Peterson guilty, jurors must reach a unanimous verdict. That means that Rusty Hardin need only convince one juror to give Peterson a pass. Hardin, who secured an acquittal for his client Roger Clemens in his perjury trial, knows that physical abuse as a form of discipline is accepted and is part of the culture in Texas. As well, reasonable discipline is provided for, and protected, under Texas law. So while that one juror may not approve of the harm inflicted and believe it wasn't reasonable, he or she may still be empathetic towards Peterson, believe he's learned his lesson and give him a pass.

And for Peterson and Hardin, that's the hope.