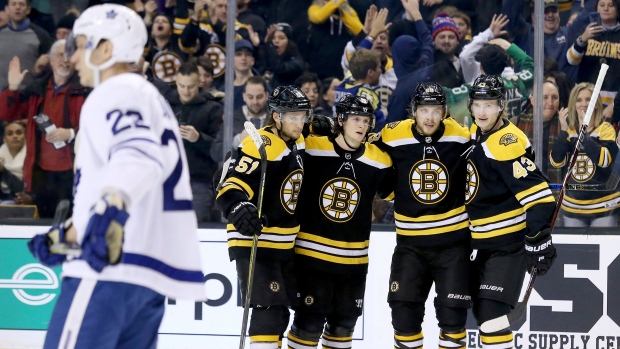 The Toronto Maple Leafs saw their four-game win streak grind to a screeching halt Saturday night in Boston, where the Maple Leafs fell 4-1 in what could well be a potential first-round playoff preview. The loss moved the Leafs to 30-19-5 on the season and five points back of the Bruins for second place in the Atlantic Division, with four fewer games in hand.

The Maple Leafs had looked loose and relaxed at Saturday’s morning skate, exactly like a team that was riding high on a string of wins where they were far and away the superior team. Toronto had posted back-to-back shutouts against the New York Islanders and New York Rangers coming out of the All-Star Break, outscoring their opponents by a combined 9-0.

But it wouldn’t take the Bruins long to bring the Leafs back down to Earth on Saturday. Early in the first period, first Nikita Zaitsev and then Auston Matthews failed to clear the zone, and Patrice Bergeron had a wide-open look at Frederik Andersen from the slot to open the scoring. Toronto’s streak of no goals-against ended at 126:46, going back to the 17:43 mark of the second period against the Dallas Stars Jan. 25.

The Leafs were sloppy all over the ice in the first frame, posting eight giveaways (three by Matthews) to zero by the Bruins. A Charlie McAvoy own-goal (credited to Mitch Marner) tied the game but Boston dominated possession at nearly 70 percent.

The physical Bruins continued having their way with the Leafs as the game wore on; the Leafs were being repeatedly shoved off pucks and man-handled through the neutral zone and too often along the boards as well. Toronto was winning more faceoffs than the Bruins throughout the game (finishing at 55 per cent by game’s end) but they couldn’t do much with the puck when they had it, committing too many turnovers and halting their own momentum repeatedly.

Toronto didn’t make many strides in their possession game from the opening frame, finishing at 36 per cent on the night. The Leafs had only 28 shot attempts on net (24 got through, to 30 by Boston), marking the lowest shot attempts total for Toronto all season.

Too hot to handle

Mike Babcock said before Saturday’s game that the special team’s battle would be important because of how good the Bruins are on special teams (seventh-ranked power play, fifth-ranked penalty kill). So the Leafs were well-aware that the red-hot Bruins, who just came off a streak of earning at least a point in 18 consecutive games while amassing 13 power play goals in the process, were a team they couldn’t afford to take penalties against.

But their veterans didn’t get the memo, and the penalty kill wasn’t the up to the task against an active Bruins power play. Tied 1-1 in the second period, Patrick Marleau took an egregious tripping penalty in the neutral zone midway through the frame and it only took seconds for the Bruins to capitalize - David Pastrnak fired a shot from a sharp angle on Andersen, who appeared to have the puck, but it snuck behind him.

Then it was Ron Hainsey going to the box late in the period for interference, putting Boston back on the man advantage after they had carried play for much of the game since previously scoring on the power play. And score again they did, this time off a one-timer from Torey Krug that beat Andersen cleanly.

While they allowed goals with the extra man, Toronto struggled to score when the advantage was in their favour. After Marner got credit for McAvoy’s own-goal on the Leafs’ power play, Toronto never buried one again on their next three chances.

Still in the second, Tuukka Rask absolutely robbed Tyler Bozak on one chance and then the Leafs missed on two subsequent open net chances. At that point Boston got the puck back and created a solid shorthanded scoring chance that went off the post, and then as the Leafs were hemmed into their zone Morgan Rielly took a holding penalty to negate the rest of the power play.

For all the emphasis the Leafs had put on being prepared for the importance of special teams, their inability to capitalize on their own chances (and they had plenty) ended up being the nail in their coffin. It was the second time in five games the Leafs have given up multiple power play goals.

Healthier by the day

On a night when the Leafs’ forwards failed to give their defencemen much help by way of backchecking and poor neutral zone play, the backend was at least healthier than it had been in some time. After getting Zaitsev back on Wednesday, Rielly was also able to return after missing the Leafs last seven games with an arm injury. He looked like his old self quickly, making a textbook play on a Bruins two-on-one in the first period that helped keep some momentum with the Leafs in an otherwise tilted first frame. Rielly continued to look better as the game wore on and he and Hainsey (who also missed the Leafs’ last two games while recovering from the flu) saw a lot of the Bruins’ top line comprised of Bergeron, Pastrnak and Danton Heinen.

But even with Rielly on his game, the results weren’t very favourable. The Bergeron line dominated the Matthews line up front, with Matthews posting a career-worst 21 per cent possession against Bergeron, the lowest total among Leafs on Saturday. Rielly hovered around 32 per cent with Hainsey. While Rielly didn’t stand out for many individual bad plays (aside from the penalty in the second period), the Leafs struggled so much just getting out of their own zone that Rielly’s return was coloured by disorganization in the defensive zone and too many turnovers and blown assignments as a group. He finished the night with an assist on Marner’s goal and one shot on goal in 20:50 time on ice.

No player has been more crucial to the Leafs’ success this season than Andersen, and that’s never more apparent than in the games where he’s not at his best. And throughout his career, Andersen has generally been excellent against Boston - Saturday was the first game Andersen has ceded to the Bruins in his last 10. The goaltender has stolen more than a few games for Toronto over the course of this season, even when the Leafs have been woefully outmuscled in the possession battle, but against Boston it was the first-shot chances that were beating Andersen and his teammates couldn’t muster any support for him at the other end on their own opportunities.

Andersen admitted after the game he wished he’d been of more help on the penalty kill especially, obviously unhappy about the goals from Pastrnak and Krug that got by him over a seven-minute stretch in the second (although he admitted the shot by Krug was "pretty good...you have to move on.") Turning aside 26 of 29 shots (.897 save percentage), Saturday was the third time in five games Andersen has posted a save percentage below .900.

Toronto returns home to face the Anaheim Ducks on Monday.​