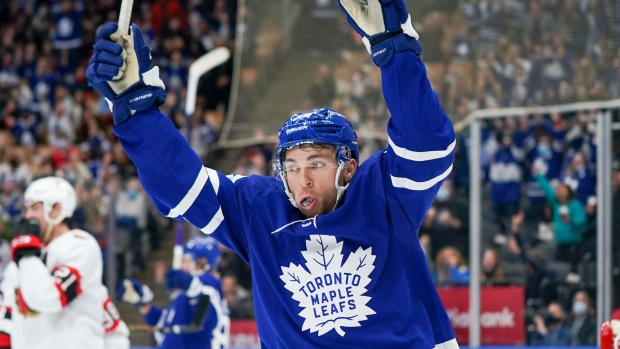 TSN Toronto Reporter Mark Masters reports on the Maple Leafs, who skated (optional) at the SAP Center in San Jose on Friday ahead of tonight’s game against the Sharks.

"He gets in the dirty areas around the net," observed linemate Mitch Marner. "He causes a lot of havoc on goalies and not a lot of d-men like that. He puts the puck in a good spot where players got to use their stick a little more."

The rookie winger also plays with an edge.

"He's not afraid," noted Auston Matthews. "He's not backing down from anyone."

"I don't think guys like him on the other team," said a smiling Alex Kerfoot, who's second on the team with seven drawn penalties. "That's his game. He goes in there and plays hard and gets into those dirty areas where he creates confrontation. So, that's part of it. He gets under the skin of guys and that's what makes him who he is. He goes to the areas where penalties are going to be called and stirs the pot a little as well."

Bunting says moving his feet is key. He also flaps his gums.

"I'm not afraid to be pretty vocal out there," he said with a grin. "I'm talking quite a bit, probably the whole game. That's part of my game."

You can understand why Kurtis Gabriel, who's now with the Toronto Marlies, dubbed Bunting "a greasy rat" during a pre-season game.

"He's just always in the mix," added Matthews. "He competes really hard and (smile) a pretty good actor out there sometimes, too."

"It's not like I go out there thinking, 'Oh I got to draw penalties,' I just play my game and if I draw them, I draw them," he said.

Sheldon Keefe believes this is a valuable trait.

"It is a skill and one that is not easily transferrable to others," the coach noted. "That is why you don't see a lot of guys that have the ability to do that. It is something that is important."

And it's helped earn Bunting a promotion. Early in the year, he spent nine games on the top line, but produced only two even-strength assists and was demoted to the fourth unit. After drawing two penalties against Pittsburgh on Saturday, he moved back up to play with Matthews and Marner on Sunday in New York. He appears a lot more comfortable in this second look with the first line.

"I have a little more confidence with the puck," he said. "I want to make more plays instead of just kind of getting it on my stick and off my stick as fast as I can. I'm starting to look for them and using my speed to my advantage."

Bunting set up a Marner goal in New York on Sunday. He picked up a goal and an assist on Wednesday in Los Angeles.

It's only fair that Bunting, considering he draws so many penalties, gets to play on the power play. He's in the bumper spot on the second unit, which scored a goal via a Jason Spezza shot in Los Angeles.

"He knows it is a big part of what he brings to our team," said Keefe of Spezza. "He takes it very seriously and takes ownership of that unit. Coming downhill with that shot is a bit of a signature [move] for him."

"We've seen that one before from Spezz," noted Matthews.

But not everyone is used to seeing Spezza do Spezza things.

"It's ridiculous," marvelled rookie defenceman Rasmus Sandin. "I see him every day in practice just working on those shots. My eyes just go numb. Like, it's nuts to see him shooting those pucks. He just goes top corner all the time and ringing it off the bars and posts all the time. To be honest, I'm still surprised about those shots because they're so hard and his accuracy is really good too."

It was an important goal for the Leafs power play, which had gone 0-for-7 during weekend games against Pittsburgh and New York.

The Sharks own the league's second-best penalty kill (88.9 per cent).

"It's probably the most pressure you'll see in [the] NHL," said Keefe. "Right from the drop of the puck, they're coming. They don't lay off. It's a great challenge to execute within that."

After struggling down the stretch last season, the power play was a point of emphasis for the Leafs to start this year.

"As a unit, we want to be really, really good," said Morgan Rielly, who quarterbacks the top group. "There was a period of time there when we were pretty hot, but there's still a lot of emotion about wanting to be better. That's what our team's all about and what our unit's all about."

The Leafs have won 12 of 14 games since Oct. 26 and the power play is a big reason why. Toronto has converted at a 29.7 per cent clip in that stretch, which is tops in the Eastern Conference.

"We really want to move the puck with a lot of pace and overshoot the puck and get it back and overshoot it again," said Rielly. "At times we overpass it and lately we've been trying to shoot more."

The Leafs trail only the Edmonton Oilers in shots per 60 minutes in five-on-four play, per NaturalStatTrick.com.

"It's a way to make the defenders turn," Keefe explained. "The defenders themselves have to go find ways to pursue the puck and retrieve the puck and then you have an opportunity to earn the puck back and strike. And that is, really, a lot of times, where the advantage or edge is, especially on the power play. When the opponent is trying to retrieve the puck and you get it back, all the sudden, they're not in the structure that they practice every single day and prepare for in meetings."

Ondrej Kase will miss Friday's game with an undisclosed injury. The feisty winger has dealt with injury issues the past couple of seasons so his absence raises a red flag.

"Any time you have him not playing it stands out a little bit more than anyone else," Keefe acknowledged, "but the fact he's here today and sitting in our meeting and lifting weights in there and working out, it's a little less concerning in that sense. But, obviously, with what he's been through there's going to be a lot more caution."

With Kase out, Wayne Simmonds will move up to the third line alongside David Kampf and Nick Ritchie.

"We're looking for him to not change, really, from what he's done," said Keefe. "He's a guy that's played a lot in his career and played in a lot of situations with a lot of different linemates so just stay with it. He hasn't spent really any time with Kampf. He spent some time with Ritchie. Simmer's done a really good job. Like a lot of players lower in the lineup, you're looking for a little bit more when it's available and tonight it's available."

On Wednesday, Simmonds registered his first multi-point night (two assists) since scoring a pair of goals against the Vancouver Canucks on Feb. 6. That was the night he sustained a broken wrist.

At the time of that injury, Simmonds was playing a top-six role. He never really got rolling again upon returning to the lineup.

This season, the 33-year-old has been playing exclusively on the fourth line. Simmonds was even made a healthy scratch for one game.

"We're both in a different role now and it takes some adapting," Spezza said. "It's important that we don't judge ourselves on production and I think Simmer's learning that and his game's been really good lately."

Simmonds is averaging just nine minutes and 34 seconds of ice time per game, which ranks last on the team.

"We obviously don't play the most on the team so we got to be real direct," Simmonds said before the game in Los Angeles. "We don't have any time to mess around. We always say our first shift sets up our whole game so we got to go out there, we got to bang bodies and we got to get pucks to the net and our game takes form from there."

Travis Dermott is currently the odd man out in Toronto's defensive rotation. He will sit for a fourth straight game as a healthy scratch.

"It is just a matter of communicating, making sure the guys know what the situation is," Keefe said. "I think we have done that. We believe that having seven defencemen that can play is a strength for us as a team at this point, but it is certainly something we have to manage."

Keefe had a chat with Dermott on the ice after practice wrapped on Thursday.

"He has to find his way to stay sharp, stay ready and step in and take advantage of his opportunity," Keefe said. "We thought Justin Holl was going to have to sit maybe one game. He ended up sitting five. Generally, we have tried to keep the lineup rolling here. It is a daily discussion. We have just felt that we want to keep it the same here for the last little bit."

Timothy Liljegren has been a healthy scratch in eight games this season. Tonight will be Dermott's seventh game in the press box. Sandin has sat out one game.

Keefe on D rotation: “It is just a matter of communicating, making sure the guys know what the situation is”

Sheldon spoke with Travis Dermott, who will sit a 4th straight game in SJ, after practice yesterday

“He has to find his way to stay sharp, stay ready …” pic.twitter.com/Akt1FkPhYb