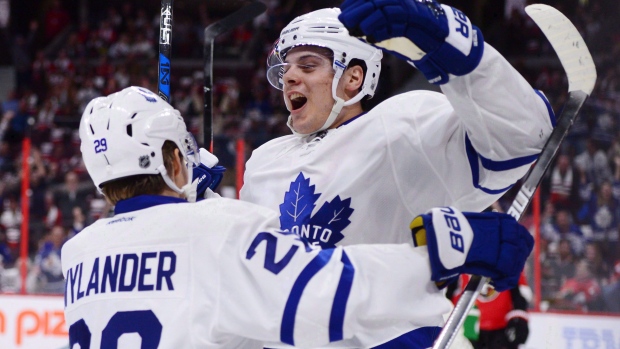 NEW YORK — Mike Babcock said he hasn’t mentioned the word ‘playoffs’ around the Maple Leafs. He doesn’t need to, he said, since he has broken the 82-game slog down into five-game segments.

The goal is six points over each five-game run. And with each segment win, the Maple Leafs peel off a layer on the Stanley Cup playoffs.

“That’s our focus,” Babcock said Friday morning. “That’s what we’re trying to do.”

Yet, the Maple Leafs players are talking about the postseason anyway.

“I mean, we can’t help but talk about it, I think,” Morgan Rielly said. “When you put yourself in a good spot and start to win games, that’s part of the conversation.”

Winning enough segments will virtually guarantee Toronto’s second berth since 2004. A total of 98 points — what six points over every five games equates to over a full season — has been more than enough to qualify for every postseason since the shootout was instituted in 2005.

A win over the New York Rangers on Friday night (7 p.m. ET on TSN4) would not only give the Leafs seven points in their eighth segment of the season, but it would clinch their third straight segment win. Toronto only won one of their first five segments.

Frederik Andersen will start in goal as the Maple Leafs try to inch within two points of their season goal at the 40-game mark, the closest they’ve been since the first five-game batch of the season.

“That means we’re going in the right direction,” Rielly said.

With one glance at the standings — and the Maple Leafs sitting in 11th place — it would easy to get discouraged. They are four points back of Ottawa for third in the Atlantic Division, yes, but the NHL’s standings are a bit of an optical illusion — especially during a season filled with bye weeks. Aside from the Leafs, the New York Islanders are the only other NHL team yet to reach the 40-game mark.

The AHL has switched to standings based on points percentage, which provides a more realistic look at the playoff chase when teams have played a disparate number of games.

If the NHL did it that way, it’d be easy to see Toronto is actually eighth in the Eastern Conference in points percentage. They have a full six games in-hand on the Boston Bruins, who are currently second in the division. The Leafs also have a better goal differential than any of the five teams they would seem to be chasing in Boston, Ottawa, Philadelphia, Carolina and Florida.

“It’s bizarre,” Matt Martin said. “You look at the standings, see where we are with games in-hand, and you realize that you keep inching closer if you win them. Boston, Ottawa and Philly seem to be the teams within range of us.”

In other words, the Leafs realize this is eminently doable. That fact alone is hard to believe, considering where the team was on this day in 2016, two points from the bottom in the conference. The postseason wasn’t even a pipe dream, let alone a talking point inside the locker room.

The Maple Leafs are currently on track for 94 points. The Senators, who recent waiver pickup Curtis McElhinney is expected to debut against on Saturday night, are on pace for exactly Babcock’s goal of 98. The Bruins (89) and Flyers (93) are also right there.

“That’s in sight for us,” Nazem Kadri said. “[Our confidence] is growing for sure, especially coming in on the road. We were struggling early on, we were losing games. We were blowing leads in the second and third period, predominantly on the road. I think that’s been the big change for us, to have that believe and confidence to go into any building and come out with the two points.”

The idea of a coach breaking the schedule down into segments isn’t a new one. Other coaches, like Nashville’s Peter Laviolette, use eight-game blocks. Babcock said his reasoning for it is because he has a “hard time concentrating for any period of time,” let alone looking at the last 43 games of the year in one chunk.

There is much work to be done, but the playoffs are in reach. That’s incentive enough.

“We definitely talk about it,” Martin said. “It’s easy to say you’ll get the next one, but we see the segments, we see the schedule. It’s like a mini-goal inside of a greater goal.”