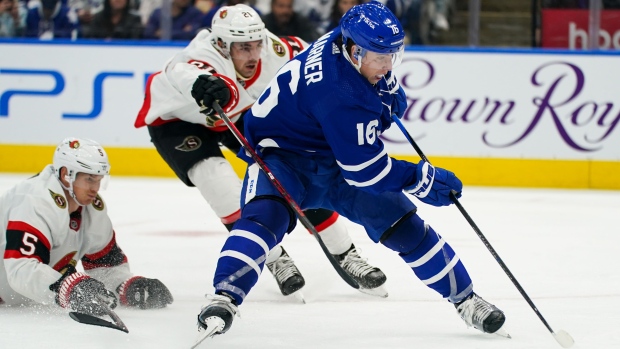 TORONTO — Mitch Marner has little to say about his lack of offensive production. It wouldn’t make much difference if he did.

Marner knows he’s being judged on results, and, so far, those haven’t come. The Maple Leafs are four games into their season and Marner has just one assist, despite top-line minutes and power-play time.

But Marner argues he’d had plenty of chances to score, as evidenced by his 13 shots on goal, and the solution to this early drought is right in front him.​

“Hopefully the puck goes in,” Marner said after the Leafs’ practice on Tuesday. “Passes the goal line.”

Does he need to do anything differently for that happen?

So then, what’s the strategy to reach a different outcome?

“It goes in,” he said. “Get there around the net. Chances are coming, so I'm going to stay patient. Don't want to force anything. Stay patient with the puck like I've been doing. Chances will come.”

It’s a familiar refrain from Marner, who was most recently criticized during the Leafs’ unsuccessful first-round playoff series against Montreal last spring for managing zero goals and four assists through seven games.

Since then, he’s been working with a new left winger in Nick Ritchie, and just got his usual centre, Auston Matthews, back from a wrist injury in Monday’s 2-1 overtime loss to the New York Rangers.

There have been moments over the past week where Marner has looked disgruntled after a missed opportunity on the ice or while rewatching plays on the bench following a shift. But coach Sheldon Keefe claims Marner hasn’t let frustration seep into his psyche.

“[I see] no frustration,” Keefe said. “I think he's feeling good, and I think he's done a lot of really good things. I thought he and Auston picked up where they left off yesterday; the chemistry that they have is there and is the same. For Mitch, there's a lot of attention on production and things of that nature. He was one of the top scorers in the entire league last season and consistently has been, but he also does a lot of really good things for us without the puck.”

Marner did finish fourth in league scoring last season, putting up 20 goals and 67 points in 55 games. Matthews was a big factor in Marner’s success – and vice versa – so there’s reason to believe Marner can see his stats inflate as Matthews gets back up to speed.

At least, that’s what Keefe is banking on. Not only that Marner will find his groove, but so will others in Toronto’s ranks who haven’t been showing up enough on the scoresheet.

John Tavares, who was centering Marner and Ritchie for the club’s first three games, has zero goals and two assists. Ritchie has been blanked. By comparison, wingers William Nylander (two goals and four points) and Michael Bunting (two goals and three points) have been rolling.

It’s about time for the rest of Toronto’s top-six forwards to catch up.

“I'm not worried about the offensive side; it's going to come,” Keefe said. “[Marner is] going to break out, Auston’s going to break out. We've got a number of others on our team [including] John [Tavares]. Those guys are going to find their offence and we're going to benefit from that. I think [Tavares] has been good and there have been no issues for me defensively.”

Tavares has now returned to playing with Nylander, his most consistent linemate a season ago, leaving Matthews and Marner to continue working with Ritchie. It hasn’t been the most seamless transition for Ritchie after what looked to be a promising preseason, but there has been no sign of Keefe considering a change to his top line.

The key, according to Ritchie, is that trio playing more games together and learning each other’s tendencies. Marner will do his best to fast-track the process where possible.

“We'll talk throughout practices and games [about] where me and Auston are going to be,” Marner said. “And he's good at those little three-foot plays and finding us. I think he's adapted really quickly to us. He's around that net, he's getting pucks back in the corner. I think there will come a time where he knows where we are [on the ice] eventually, but that obviously will take time.”

Toronto at least has that to its advantage. The Leafs don’t play again until Friday, giving them ample opportunity to review what’s gone right, and wrong, in the early going.

One major point of emphasis for Keefe is Toronto getting in the face of goaltenders and allowing some of those chances to snake through. The Leafs are averaging the fourth-most shots per game in the NHL this season (39) but have done a mediocre job of creating traffic around the crease.

That’s a simple answer to what Toronto wants to avoid having become a bigger problem.

“We’ve generated a lot of scoring opportunities, a lot of very clean looks at the goaltender, but we don't want them to always be so clean,” Keefe said. “We need other people to get around the net, we need to get some deflections, we need to get loose pucks in around the cage. So, there's a lot of things that we can do that can help influence things offensively there for all of our lines and make life a little bit harder on the goalies.”