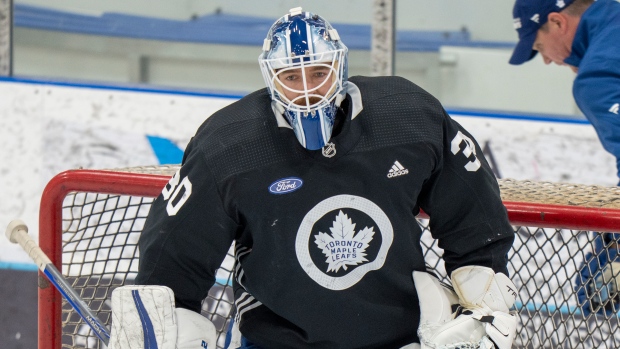 The Leafs held a morning skate (game group) and practice on Wednesday at Scotiabank Arena.

Matt Murray will see his first game action as a member of the Maple Leafs on Wednesday night, but the 6-foot-5 goalie has already made a big impact on his new teammates.

"A big guy," observed winger William Nylander. "I didn't know how big he was until I saw him for the first time. The way he moves out there in the net I think he covers a lot. There's not a lot to shoot on, that's for sure."

"He's a big goalie in there," echoed defenceman Mark Giordano. "Shooting on him you notice how much of the net he covers."

Murray is only two inches taller than predecessor Jack Campbell, but perhaps his pedigree makes him seem even bigger.

"That's incredible," gushed Nylander. "I don't think you get a chance to play with a goalie that's won two Cups [often] so obviously a lot of experience and a guy we can lean on."

"He's done it before," noted forward Alex Kerfoot, "won at the highest level. He's just got a confidence about him. He comes in every day and knows what he needs to get done."

"He's got a calm presence, I find," said centre Auston Matthews, who played in front of Murray at the 2016 World Cup on Team North America. "He's not a super talkative guy, but seems poised and in control."

Murray is determined to return to the top of the game after an injury-plagued and star-crossed run in Ottawa. His work ethic has impressed the Leafs.

"He's earned that confidence," said coach Sheldon Keefe. "I mean, it goes without saying the Cups that he's won, there's confidence that comes with that, but he's worked extremely hard this summer. I know he's excited to be here and work with our staff and be around our team. So, he's brought a great presence since he's been here."

Murray hasn't played since suffering a concussion on March 5.

There will be a couple new defence pairs in front of Murray on Wednesday. Jordie Benn will get a look beside Morgan Rielly.

"Makes life real easy," Benn said of his new partner. "He's a special player so makes my life easy, which makes my days easy. It's nice."

The other pair isn't really all that new. Giordano and T.J. Brodie partnered to great success during their days in Calgary, but haven't spent much time together in Toronto.

"We've had a couple good practices," Giordano said. "Hopefully we can gain some chemistry we've had in the past."

Is the mild-mannered Brodie any different now versus than what Giordano remembers in Calgary?

"He's exactly the same to me. He's got a sports car out there now that I never expected him to have (smile), but other than that he hasn't changed much ... The city got to him, I guess, a little bit."

Giordano is Toronto's oldest player at 39, but the return to his hometown has him feeling invigorated.

"First off, not having to worry about travelling at the start of September and staying home and being settled was great," he said. "More importantly, training at our facility [in the summer] and getting some really good skates, some really good off-ice sessions in, keeping your nutrition up, all those little things go a long way. I feel good. So far at camp I feel really good physically."

Giordano wore an 'A' in Saturday's split-squad game, but stressed that Toronto's room is already full of elite leaders.

"We have a great group," he said. "[Our] leaders are right up there with anyone in the league."

Jake Muzzin participated in half of Wednesday's practice.

"Reports I got were very positive," said Keefe. "He could have continued through, we just thought we'd take it a little bit at a time, but everything went really well."

The 33-year-old defenceman missed the first week of camp due to back discomfort.

Jake Muzzin (back discomfort) is taking part in his first practice of Leafs camp pic.twitter.com/riHNytOusw

Matthews threw out the ceremonial first pitch at the Blue Jays game on Tuesday night.

"He was trying to compete to get on that mound," noted linemate Mitch Marner, "but it looked as if Ace didn't want him to. I guess now the pitchers don't really like when people go on that beforehand. Some pretty high heat there, but pretty well done."

Matthews, Marner and Michael Bunting got the chance to visit with 6-foot-7, 282-pound New York Yankees slugger Aaron Judge for about five minutes before the game.

"Really, really nice guy," said Matthews, who stands 6-foot-3, 208 pounds. "I'm not sure I've ever felt that small next to somebody before, but it's really cool to meet a guy who's at the top of his sport."

"The trainer there was telling me he wears size 17 boots," said Marner. "When he was running the bases there it looked a bit like clown shoes to me."

Judge has hit 60 home runs this season, which is one off the American League record held by Roger Maris since 1961.

"What he's doing right now in that league is unbelievable," Marner said. "It was special to watch him. We were hoping we might get to see that [record] breaking home run."

Apparently, Judge is a bit of a hockey fan.

"He was telling us he's gone to a couple [New York] Rangers games and loved the atmosphere," said Marner. "He watched Auston a little bit last year too with his remarkable year and putting up 60 [goals]. They were the 60-club ... it was nice for me and Mike to be in the background of that one."

After missing a couple days for personal reasons, David Kampf rejoined the Leafs on Wednesday. He spoke to the media for the first time at camp and lamented the fact Ondrej Kase left for Carolina in free agency.

"He's my very good friend so I was a little bit sad that he left, but this is hockey," the shutdown centre said. "This is business and hopefully some day we can play together again."

Kase played effectively throughout Toronto's top nine during his lone season with the Leafs. He also had a role on the power play and penalty kill. The arrival of Calle Jarnkrok will fill the void left by Kase.

"He's a confident guy," Keefe said. "He holds onto the puck. We saw the other night how he can shoot it. If he's playing with good players, I find [he's] in good spots to use his shot. He's got really good defensive awareness. He's a very conscientious player. He has good detail, habits and structure to his game every day. Last year, we had a player like Kase that played a similar type of role and Jarnkrok has that except he's got more experience doing it.

I had high expectations for him coming here and, it's early of course but, to me, he's over-delivered so far. It's great having him part of our group."

Lines at Leafs practice on Wednesday: