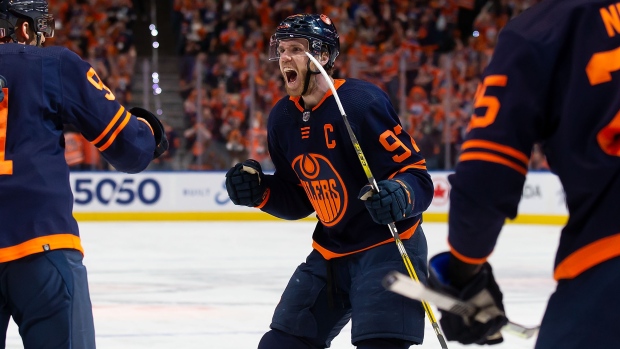 Connor McDavid is breaking hockey as we know it.

That’s not hyperbole. When was the last time we’ve seen a player dominate game after game the way McDavid has this postseason? I joked last week the NBA and NHL switched roles this postseason – the NBA conference finals are ripe with team-dominated basketball, while NHL fans are watching a superstar of the highest order completely take over games.

That’s the ironic part. We have seen a number of first-ballot Hall of Fame players in the NHL over the past 20 years. Sidney Crosby, Alexander Ovechkin, Pavel Datsyuk – the list goes on and on. The bar they set for what would be considered exceptional performance in a team-dominated sport like hockey could be touched only by the most talented players in the world.

But none of these players is the appropriate comparable for what McDavid is doing right now. In fact, McDavid isn’t even an appropriate comp for what McDavid is doing right now. His play has forced us to reimagine how much a star player can carry a team in the NHL. That’s no slight to the rest of the Oilers. It’s reality. It’s the type of question we tend to ask about NBA legends like Magic Johnson, Michael Jordan, or LeBron James. Not a hockey player.

I will continue to emphasize how unprecedented this is. The below chart shows an overlay of Edmonton’s scoring with McDavid on the ice over the course of his career, as well as expected rate-scoring against (blind to goaltending performance). McDavid is posting unprecedented offensive numbers this postseason, and he’s doing it through comprehensive puck dominance that yields little in the defensive zone: 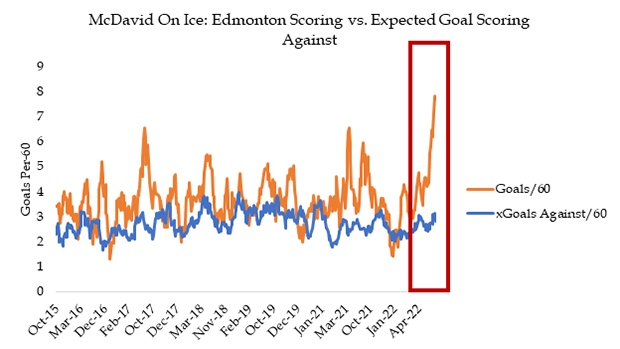 Yes, you are reading that correctly. Over the course of the postseason, the Oilers are averaging nearly eight goals per 60 minutes of play at even strength.

This isn’t a player amid a white-hot shooting run, or a guy who is relying on special teams dominance to drive scoring. And though it’s over a stretch of 11 games, it’s also against two playoff-calibre clubs – one of which is a bitter division rival coming off one of the best regular seasons in franchise history.

But the Flames, like the Kings in the first round, have no answer for this type of production. Who could? Consider the data we do have for every playoff forward over the past 15 years. The table shows the highest yields in terms of individual scoring (all situations). Can you find anything remotely comparable? 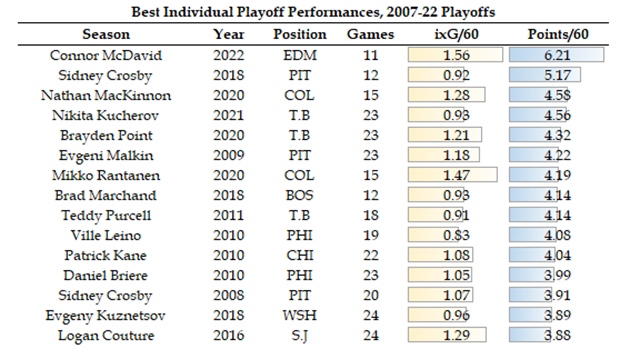 Sidney Crosby’s 2017-18 postseason was probably the high-water mark for a forward prior to this season. The Penguins went much deeper in other years, but Crosby’s 21 points (nine goals, 12 assists) in just 12 games was, at the time, hard to fathom.

We have seen plenty of other great scoring performances. Nikita Kucherov’s 35 points in 2019-20 was the most we have seen from a single player over the course of a postseason over this period, managing that in 25 games (4.6 points per 60).

But the McDavid story isn’t just about his own scoring. It’s how his line scores at will, largely off his presence, playmaking, and ability to push the pace of play in a way opposing defences simply cannot handle.

What if we looked at the same offensive leaders, but this time focused on total goals scored with a player on the ice? It’s more indicative of team strength, and a better indicator of how far a team may be able to push into the playoffs. This table includes only players meeting or exceeding McDavid’s ice time so far this postseason: 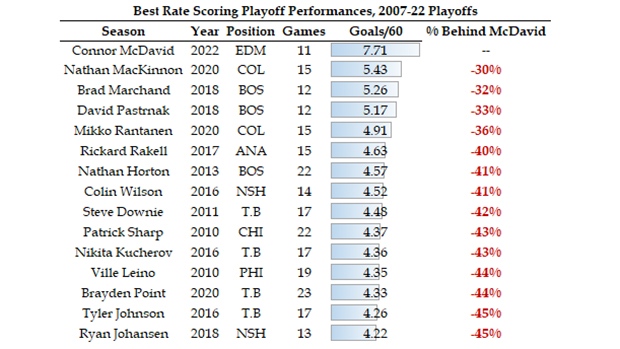 Think about this: Nathan MacKinnon’s playoff run two years ago, which we all rightfully fawned over, saw his line in Colorado scoring at a clip 30 per cent lower than McDavid’s line is in this postseason.

I’m fascinated to see how long this can continue. For close to two decades, we have prognosticated that team talent and team depth wins Stanley Cups. The data still supports that theory. But a unicorn has found his way into the Edmonton lineup, and this sort of math fundamentally changes how we understand this sport.

Appreciate greatness. We haven’t seen anything like this in a long, long time.